Upon arriving in Boston the summer of 2015, Ygor Ortenzio didn’t know that over the next year, he’d discover a passion for brewing microbiology that would develop into his future career. He spent his first two months studying English through Boston University’s Center for English Language & Orientation Programs (CELOP), followed by two semesters studying biomedical sciences at Boston University’s Metropolitan College (MET) through the Institute of International Education’s Brazil Scientific Mobility Program. 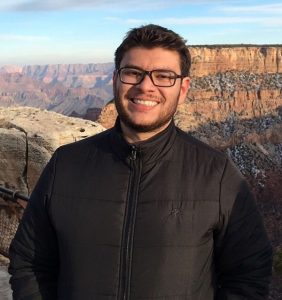 Advanced molecular biology, taught by BU’s BioScience Academy lab supervisor Stefan Doerre, was one of Ortenzio’s favorite classes. “It was a unique experience,” he remembers. Each student was assigned a research paper on a particular molecular technique; they then taught each other the procedures, explaining the molecular mechanisms underlying each step, and discussed the results and conclusions reached through their individual experiments employing the technique assigned.

During his second semester at MET, Ortenzio pursued an internship to gain practical experience in food science and fermentation. “After reading and learning more about beer, I noticed that craft brewing was an amazing area of work where I could deal with microbiology, fermentation and biotechnology,” says Ortenzio. He was thrilled to intern with Aeronaut Brewing Company, an award-winning start-up based in the Boston area.

“During my time at Boston University, I took courses that helped me [with] the process of understanding brewing microbiology at Aeronaut,” Ortenzio explains. In addition to screening wild yeast strains, performing test fermentations and measuring beer attributes like color and bitterness in Aeronaut’s lab, Ortenzio helped develop new products. This includes a pineapple beer that was finally released to the public this past August.

“I also brewed liter-scale test batches,” he says, “to determine the attributes and contributions of several critical brewing ingredients, [such as] hops, yeast, malt and adjuncts.”

Ortenzio has fond memories of his time in Boston, including his classmates and advisors at MET and his coworkers at Aeronaut, with whom he still keeps in touch. “Being in contact with a foreign culture and language also assisted me to become more independent and confident about things I want to do,” he states. “My experience in Boston influenced my way of thinking and helped me to figure out what I love to do and what I want my career to be.”

Since returning home to Brazil, Ortenzio has used the knowledge he acquired during his internship with Aeronaut to write his graduate thesis on brewing technology. He is also starting a project with one of his professors to produce beer using Brazilian ingredients, including local fruits. In the future, he plans to expand upon his knowledge and understanding by pursuing a doctorate in brewing microbiology.