When Mauro di Buono arrived at Boston University in fall 2013, he couldn’t have guessed what an impact his study abroad experience would have on his life. The classes he took to complete a Graduate Certificate in Financial Markets and Institutions at BU’s Metropolitan College (BU MET) sparked his passion for investment analysis and portfolio management. This led to his completing an Advanced Graduate Certificate in spring 2014 by doing an internship for an equity research company in New York City, which set the stage for an international career and enabled him to get a job with his current employer, Cambridge Global Payments. In addition, he also met his girlfriend right on BU campus.

“As you can see,” says di Buono, “since I came to Boston, a series of life events have brought me to where I am now.”

Di Buono works as an FX Trading Associate on the Italian desk at Cambridge Global Payments, which he describes as “the largest independent provider of cross-border payments and FX risk management.” His career path was clear the moment he began attending Bocconi University, where he obtained a bachelor’s degree in Economics and Finance followed by a master’s degree in Finance. 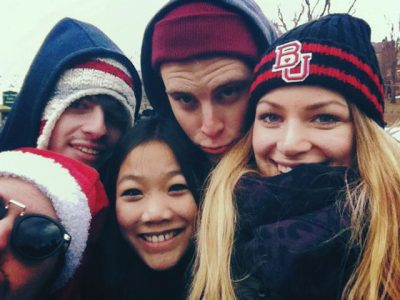 During his first semester at BU MET, di Buono’s mastery of finance and fluency in English was solidified. While he enjoyed all of his coursework, he describes Investment Analysis and Portfolio Management as his favorite class for several reasons. “First, Professor San Chee was driven by deep motivation and passion in teaching the subject,” di Buono remembers. “Second, the class was extremely challenging. We were required to build financial models and graphs to simulate potential investments in the financial markets. That was very interesting and stimulated my passion for the subject.”

Di Buono credits his professional success to his study abroad experience. He explains that studying in Boston helped improve his communication and teamwork skills. “As part of a multinational company, these skills are key in order to succeed in international environments.” He also points out that his peers in the program are an asset. “Being part of the BU MET International community has put me in contact with the smartest students from all over the world.”

In addition to keeping in touch with his friends and former classmates, di Buono also adopted the American tradition of celebrating Thanksgiving, about which he learned at an event organized by BU MET International. “Since then, I still celebrate this holiday, even when I am not in the USA,” he says. “I will always be grateful for my experience at Boston University.”