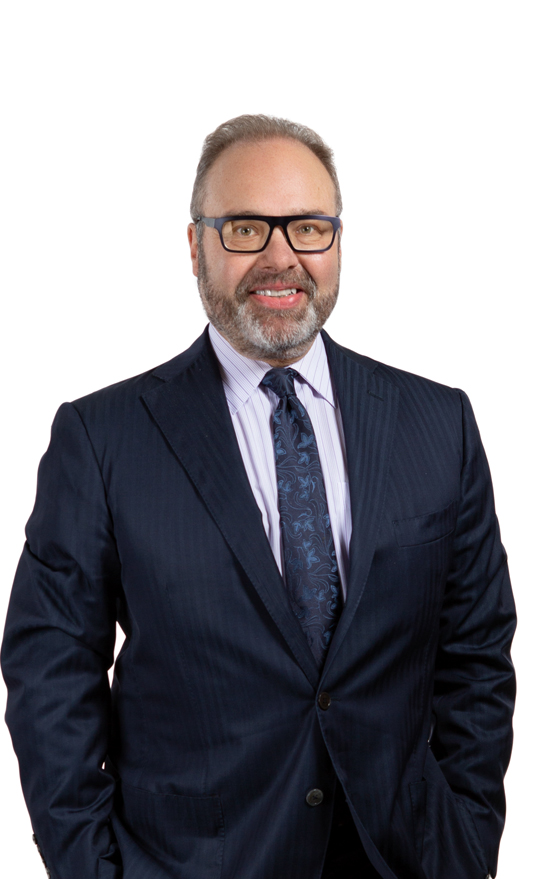 Christina Rice, director of the Graduate Tax Program, to serve as interim assistant dean of graduate & international programs for the coming year.

John Riccardi’s (’91) announcement that he is leaving BU Law after nearly a quarter century of leadership was met with shock—and some tears. After all, as assistant dean of graduate & international programs, he directed programs including the LLM in American Law, LLM in Intellectual Property Law, international engagements, executive online and special initiatives, study abroad, international dual degrees, and Visiting Scholars as well as graduate and certificate programs.

He also has worn different leadership hats, sometimes directing multiple offices at the same time. At one point, he was the head of Graduate & International Programs along with JD Admissions and Marketing & Communications.

“Assistant Dean Riccardi has made the BU name one that is well known among attorneys around the world, and we will miss him more than I can say,” says Professor Robert Volk, director of legal writing & appellate advocacy who taught Riccardi when he was a 1L.

To honor his legacy and ensure that his efforts continue full steam ahead, Dean Angela Onwuachi-Willig has appointed Christina Rice, director of the Graduate Tax Program, to serve as interim assistant dean of graduate & international programs for the coming year. Professor Christopher Robertson will serve a special one-year appointment as associate dean for graduate & international programs.

Assistant Dean Riccardi has made the BU name one that is well known among attorneys around the world, and we will miss him more than I can say.

Riccardi was working at a legal consulting firm in 1997 when he received an intriguing job offer: to grow the relatively new Foreign Programs Office at BU Law. For someone who describes his dream job as “part psychologist, part maître d, part headmaster, and part artist,” the opportunity was too good to pass up.

He explains, “I previously worked in advertising, so I had a good idea of how to market new programs. I had always been interested in working with individuals as a psychologist or as some kind of therapist. Counseling is an important competency in this role. I am curious about people and other cultures, and I love trying new things, keeping an open mind about what’s possible. This turned out to be the perfect job. I probably worked every weekend for the first 10 years, but I didn’t realize it because it was that much fun.”

When Riccardi started the job 24 years ago, he inherited a class of 18 students in the LLM in American Law Program, which introduces international lawyers to the US legal system and prepares them for global practice. Prior to the pandemic, he welcomed incoming classes as large as 140 students. He also grew the school’s international exchange programs from four students to 21. Over the years, he has counseled and overseen the education of thousands of international students.

Riccardi credits some of this growth to “being at the right place at the right time.” He says, “I was charged with growing the LLM in American Law Program right when the forces of globalization and cross-border commerce started to take off. There was heightened demand for foreign attorneys trained in the common law and familiar with the US legal system. A US LLM degree was practically becoming a requirement for career advancement for lawyers in some countries.”

As demand and student demographics shifted, Riccardi recognized the need to develop new programming. This included a portfolio of legal English offerings, such as the new Legal English Certificate Program/two-year LLM degree, which starts with a full year of legal English training. He also helped launch BU Law into the digital world, first with a hybrid Executive LLM in International Business Law, then an online LLM in Taxation, a Certificate in Financial Services Compliance, and, for fall 2021, an online LLM in Banking & Financial Law.

These innovations demonstrate his commitment to the integrity of the international programs, says Lorraine Kaplan, assistant director of the Graduate Program in Banking & Financial Law. “He constantly looked for ways to make improvements and enrich the student experience.”

A Commitment to International Students

Throughout his time at BU Law, his passion remained focused on international students. “Assistant Dean Riccardi’s office is full of gifts from students from countries around the world,” notes Maureen Leo, associate director of Graduate & International Programs. “Everywhere you look, you see fans, Buddhas, dragons, tea containers, brass, vases, and more. He makes a point to start building personal connections with students from the first time they contact our office. Those strong connections are often what bring people to our program.”

She adds that graduates stay in touch with Riccardi long after the return to their home countries. “Alumni say the LLM program at BU Law was the best experience of their lives. Hardly a week went by before the pandemic when someone didn’t stop by to say hello. And he makes a point to connect with prior students when he travels.”

Shisong Chen (LLM in American Law’15, LLM in IP Law’20) agrees. “Dean Riccardi played a big role in my decision to come to BU Law for two LLM programs and encouraged me to enter the JD program. Whenever I have had a big decision to make, I talk to him to make sure I am on the right track.”

Chen, a partner at the Brighteous Law Firm in China, notes that the counseling and support offered by Riccardi is particularly appreciated by international students, who are far from family. “He treats everyone as an equal and respects our opinions. I often share his emails with my family in China, who recognize how special this is and are grateful for his support.”

These connections are intentional, says Riccardi, who built a culture around getting to know international students and their needs. “We are not an LLM factory,” he explains. “We treat each student with dignity, which means individualized counseling and check-ins to see how they are doing. Most of them have not been to the US before and do not speak English as their first language. We are their lifeline to this incredible opportunity to get an advanced degree in the US, which is the dream of many students and their parents.”

Sole practitioner Anja von Rosenstiel (LLM in American Law’18) recalls the role Riccardi played in her education: “I came to the LLM in American Law Program from Germany in my 40s with four children. Dean Riccardi listened to my concerns, asked me about my goals, and recognized my prior achievements. At some schools, an LLM program is an add-on, but I never felt like a second-class student because he makes LLM students feel like a valuable part of the BU Law community.”

The reward for Riccardi is how students grow during their time at BU Law. He explains, “When people ask what I do, I sometimes joke that I’m in the transformation industry. One of the most gratifying aspects of my job is seeing the changes in LLM students. I meet them from the moment of their first inquiry and continue getting to know them through the completion of the program and beyond to weddings and births of children. We start as their home away from home and help them adapt to learning law in a foreign country. At the end of the year, the confidence they gain is a true transformation.”

Looking back, Riccardi says his work has felt more like building a large, extended family than building an academic program. “We welcome international students and recognize their courage and capabilities, celebrate their presence at BU, and recognize that they are amazing people with many things to contribute. There is so much to gain by joining this family and helping students thrive in it.”

Leo says that the school is dedicated to continuing his legacy and growing its graduate and international programs. “He will be greatly missed, but he will always be part of the BU Law family.”

Contribute to Assistant Dean Riccardi’s lasting legacy at BU Law with a gift in his honor to the Josephine Villamena Fund for the American Law Program. This fund was initially established in 2006 in honor of Dean Riccardi by his mother, Josephine.

The Next Generation of Tax Pros