2020 Menino Survey of Mayors Report on Policing and Protests

Mayors Largely Support Black Lives Matter Protests, Recognize Racial Disparities in Treatment by Police, But Are Not Embracing Dramatic Change to Policing, According to New Survey

Findings Among Those from the Boston University Initiative on Cities’ Menino Survey of Mayors, Supported by Citi and The Rockefeller Foundation 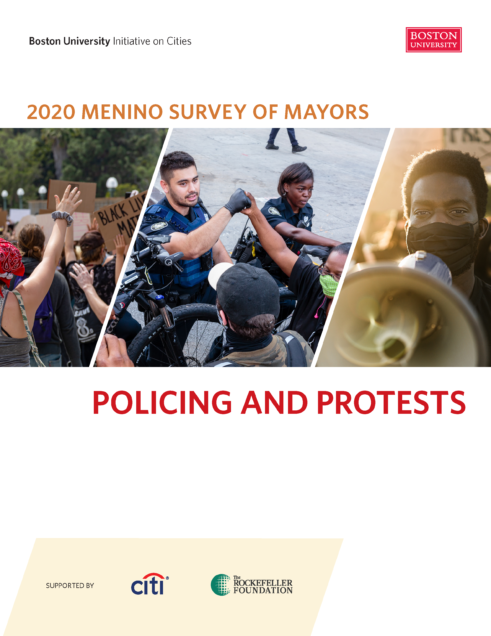 In spite of months of protests in reaction to George Floyd’s murder and other instances of police violence, roughly four in ten of America’s mayors do not believe police violence is an issue in their cities, according to this year’s Menino Survey of Mayors, the only national representative survey of America’s mayors conducted annually by Boston University’s Initiative on Cities.

Despite this, mayors largely recognize racial disparities in the way police treat their constituents. Two-thirds (68%) believe that Black people are treated worse by police compared with white people; however, there is a large partisan gap with 73% of Republican mayors believing that police treat white and Black people equally, compared with only 14% of Democrats. Despite mayoral concern about racial inequality in police treatment, 80% of mayors believe that their police departments do a good job of attracting individuals well suited to being police officers.

Mayors also largely supported last summer’s protests; just over two-thirds (69%) believe the protests against police violence were forces of positive change in their cities. But they are mixed when asked whether Black people mistrust the police; less than half (44%) believe that Black residents distrust the police—a number that persists across party lines.

“We all witnessed a national reckoning of racial injustice during the summer of 2020. Thousands took to the streets to address the trauma of police brutality and to demand change,” said Charlotte Mayor Vi Lyles. “We must acknowledge government’s history and role in perpetuating these injustices and work with our communities to make plans and policies that address disparities—in criminal justice, health, education, housing, and economic opportunity—caused by systemic racism.”

When it comes to calls by many activists to “defund the police,” a majority (56%) of mayors are open to reallocating at least “a few” police resources and responsibilities to other parts of city government—including social services agencies—though only 5% support reallocating “many.” One in three mayors do not see a need to reallocate any resources and responsibilities. Additionally, mayors overwhelmingly (80%) believe their police budgets last year were “about right.” When asked an open-ended question about desired police department reforms, just 16% support bigger structural changes. Instead, many supported a wide variety of smaller reforms to their police departments, including increasing diversity on their police forces and civilian review boards.

“The many controversial police-involved line of duty deaths of Black people in 2020 brought a renewed national focus on the long history of violence and racial bias in policing,” said Inglewood Mayor James T. Butts, a former Chief of Police. “Cities across the country must continue the work to deconstruct negative departmental cultures and improve policies and practices in policing. We need a comprehensive approach to reform, one that stresses transparency in operations, engagement with the public, an emphasis on values-oriented policing and the greater use of social services/mental health personnel—which at times are more suited to resolving crisis situations that are not suited for the use of police authority.”

Roughly 60% of mayors surveyed acknowledged police violence as a problem in their communities, with slight majorities saying that a lack of racial diversity (52%) and racism (51%) among the police force contribute at least “a little” to police violence. Other top drivers of police violence include qualified immunity for police officers (40%) and police unions (38%).

“The words ‘Black Lives Matter’ are both a statement of fact and a demand—one that not only unites mayors across the country, but also millions of Americans coast to coast who protested following the killings of George Floyd and Breonna Taylor last year,” said Otis Rolley III, Senior Vice President of The Rockefeller Foundation’s U.S. Equity and Economic Opportunity Initiative. “Mayors are in the position to lead the fight for meaningful racial equity, which includes rooting out discrimination in police treatment, as well as real investment in communities of color. For more than 100 years, The Rockefeller Foundation has worked to advance racial equality in America, and we are proud to join in this demand.”

“Leadership from mayors is essential for bringing about meaningful change. At present, however, there seems to be a gap between how mayors and activists see the situation,” said Graham Wilson, Director of Boston University’s Initiative on Cities. “For those who seek significant reform to police departments, these findings suggest that we’re in the early days of educating mayors on what the underlying problems are and what opportunities exist for reform.”

The survey, named after the late Mayor of Boston Thomas Menino and supported by Citi and The Rockefeller Foundation, is an annual project to understand the most pressing needs and policy priorities of America’s mayors from large and mid-size (over 75,000 residents) cities. In total, 130 mayors from 38 states were interviewed throughout the summer of 2020, providing a representative sample of mayors and cities nationally. Additional findings from the 2020 Survey—related to parks and greenspace—will be released as a separate report next month.

January 27, 2021 – NPR: Mayors Reflect On Police Relationships With Residents Of Color In Report

January 28, 2021 – Axios: Poll: Mayors acknowledge police violence as a problem but are resistant to major reforms

March 14, 2021 – NBC News: How to ‘defund’ the police when violence is rising? Lansing, Michigan, struggles for answers

Pushing Boundaries – Women Scientists at the Forefront of Community-Engaged Research