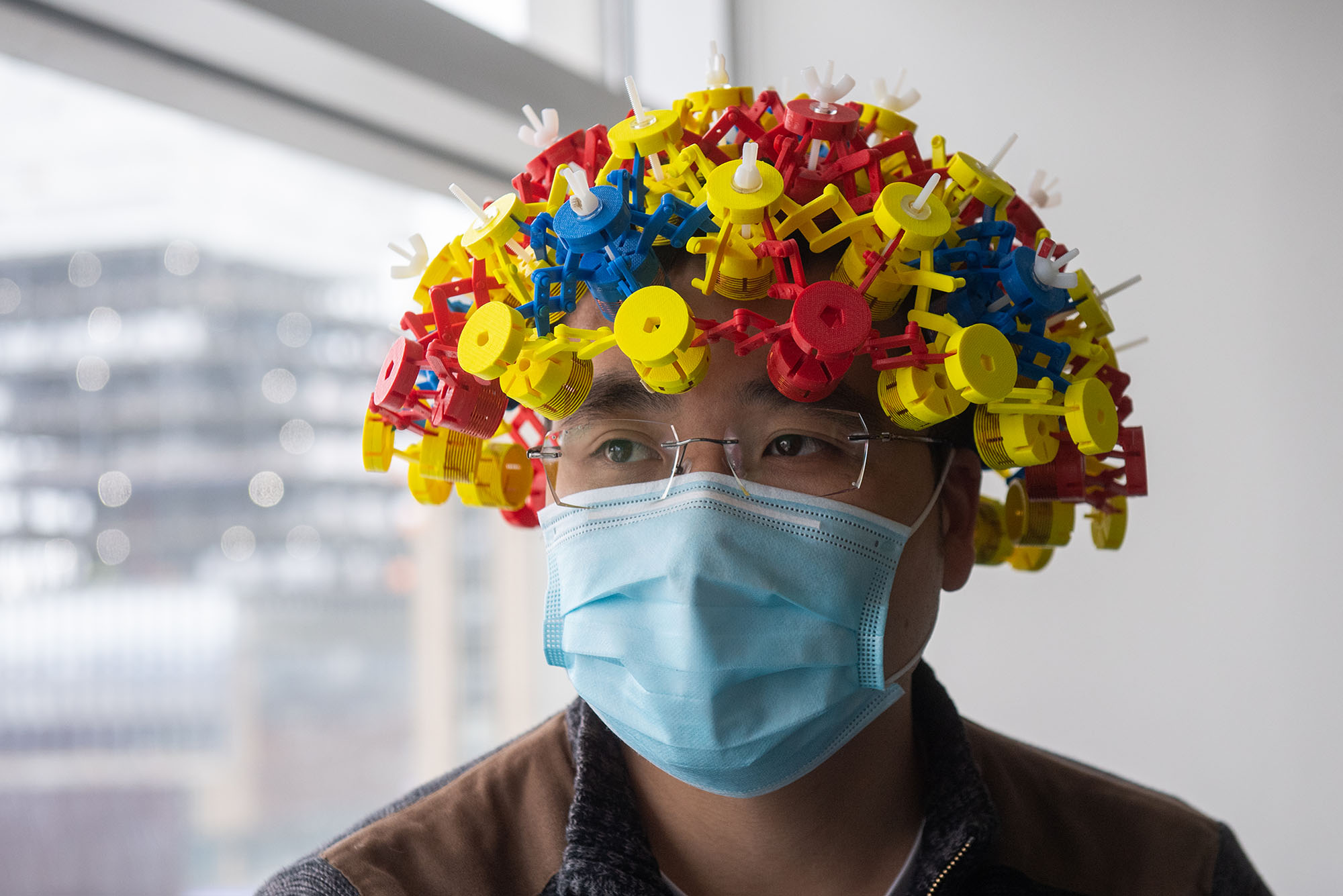 Ke Wu, a PhD student in BU’s department of mechanical engineering, demonstrates a new magnetic metamaterial device intended to be used in conjunction with MRI machines to boost the quality of brain scans.

It may look like a bizarre bike helmet, or a piece of equipment found in Doc Brown’s lab in Back to the Future, yet this gadget made of plastic and copper wire is a technological breakthrough with the potential to revolutionize medical imaging. Despite its playful look, the device is actually a metamaterial, packing in a ton of physics, engineering, and mathematical know-how.

It was developed by Xin Zhang, a College of Engineering professor of mechanical engineering, and her team of scientists at BU’s Photonics Center. They’re experts in metamaterials, a type of engineered structure created from small unit cells that might be unspectacular alone, but when grouped together in a precise way, get new superpowers not found in nature. Metamaterials, for instance, can bend, absorb, or manipulate waves—such as electromagnetic waves, sound waves, or radio waves. Each unit cell, also called a resonator, is typically arranged in a repeating pattern in rows and columns; they can be designed in different sizes and shapes, and placed at different orientations, depending on which waves they’re designed to influence.

Ke Wu (left) and Xin Zhang, a professor of mechanical engineering, designed the device by precisely linking metamaterial resonators together to channel the magnetic field of an MRI machine.

Now, Zhang and her team have taken their work a step further with the wearable metamaterial. The dome-shaped device, which fits over a person’s head and can be worn during a brain scan, boosts MRI performance, creating crisper images that can be captured at twice the normal speed.

The helmet is fashioned from a series of magnetic metamaterial resonators, which are made from 3D-printed plastic tubes wrapped in copper wiring, grouped on an array, and precisely arranged to channel the magnetic field of the MRI machine. Placing the magnetic metamaterial—in helmet form or as the originally designed flat array—near the part of the body to be scanned, says Zhang, could make MRIs less costly and more time efficient for doctors, radiologists, and patients—all while improving image quality.

Eventually, the magnetic metamaterial has the potential to be used in conjunction with cheaper low-field MRI machines to make the technology more widely available, particularly in the developing world.

This work is supported by the National Institutes of Health.