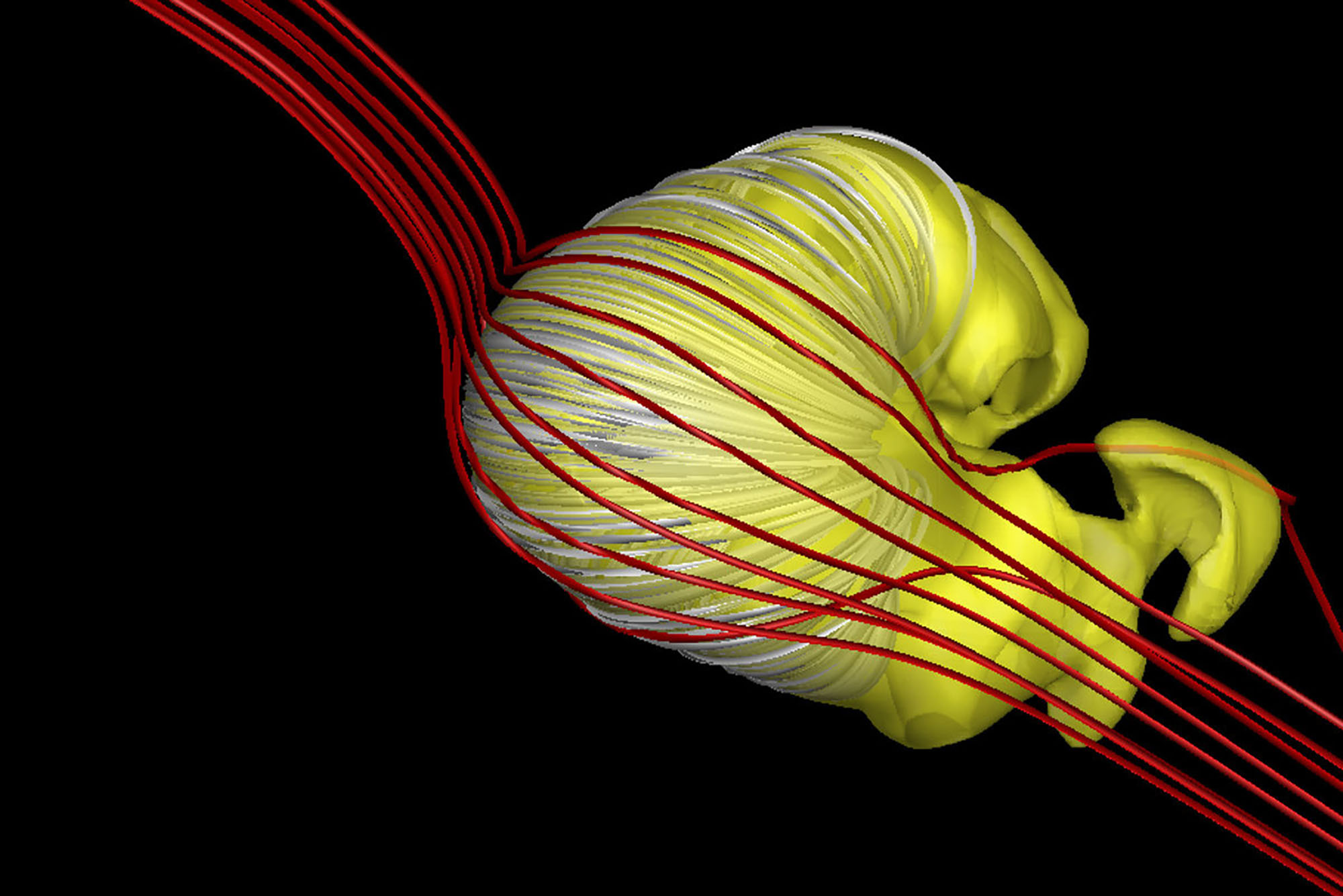 A Boston University–led team that has pioneered major advances in our understanding of the bubble protecting the solar system—and all life on Earth—has won a major new grant from NASA. The SHIELD (Solar wind with Hydrogen Ion Exchange and Large-scale Dynamics) DRIVE Science Center has been awarded a new five-year grant to continue advancing its breakthrough work in heliophysics, the study of how the sun influences and shapes the solar system. The funding will also support the team’s efforts to diversify the field of space physics.

“The competition the last two years was fierce,” says Merav Opher, a BU College of Arts & Sciences professor of astronomy and the SHIELD DRIVE Science Center’s principal investigator. “Each of the original nine is a powerhouse on its own. It’s a huge deal.”

During the program’s phase one, Opher and her team used compelling computer simulations created from observable data and theoretical physics to explain the physical mechanisms behind a new model of the heliosphere, the protective bubble that shelters life on Earth from destructive cosmic rays emanating from supernovas.

Previous models described the heliosphere as being shaped like a comet, but the SHIELD model pushed against that with the idea that it looks more like a croissant. Opher’s multi-institutional team of around 40 astrophysicists—drawn from a dozen institutions, including MIT, the University of Michigan, the University of Alabama in Huntsville, and Princeton University—was able to attribute the shape to neutral hydrogen particles, which cause instability in the jets coming from the sun that shape the heliosphere. In turn, the instability could cause a disturbance in the solar wind—or collimated plasma—coming from the sun, bending the heliosphere into a shape reminiscent of the popular pastry.

Hooked on the Heliosphere

For Opher, the opportunity to continue that work is a dream come true. She has been gazing at the stars practically from birth, as she and her twin sister looked up to their father, Reuven Opher, a leading astrophysicist and cosmologist in Brazil for more than three decades. But while most space physicists focus their attention on magnetic fields and space weather, Opher found herself hooked on the heliosphere.

“More and more we’re understanding the importance of the heliosphere for life on Earth, for how the climate was on Earth, as well,” says Opher. “Until now, the heliosphere was not central for habitable studies.”

As important as this and other discoveries are to Opher, she’s similarly enthused by the diversity aspect of the DRIVE program. Opher—a woman, an immigrant from Israel via Brazil, and a member of the LGBTQIA+ community—has overcome plenty of obstacles throughout her career. In interviews and at conferences, she’s open about the loneliness of being part of an underrepresented group in astrophysics, her ability to work through that, and her desire to support others.

“I am one of the only theoreticians in the field who is female,” says Opher, who’s also the only woman leading one of the three phase two centers. “I want to try to reach people that fall between the cracks, because they’re not the right sensibility or [because of] their gender or they’re an immigrant. We can scoop them up and embrace them, and I keep hearing how our outreach touched so many people. The challenge in phase two is to continue that momentum.”

SHIELD’s outreach program, which aims to help aspiring astrophysicists find community and receive the necessary guidance in bringing their unique voices to the field, will be directed in phase two by Sanlyn Buxner, a senior education and communication specialist and senior scientist at the Planetary Science Institute. It will include webinars, testimonials, mentoring, and networking opportunities.

Opher spoke with The Brink about the importance of that outreach, diversifying her field, and how she hopes the center will advance our understanding of the solar system.

The Brink: Now that you’re on to phase two—and this phase will be a little longer—I’m sure there’s a lot you want to accomplish. What’s one highlight of what SHIELD will be looking at?

The Brink: What will success look like for SHIELD in the near future?

Opher: The goal of SHIELD is to create a digital twin of the heliosphere, a comprehensive, self-consistent global model that explains data from all relevant in situ data and remote observations. This model would allow for better future exploration of the solar system, telling us more about how changing solar and local interstellar medium [the gas cloud our solar system is moving through] conditions affect life on Earth—and possibly aiding the effort to find other life in the galaxy.

The Brink: What makes this research important?

Opher: So far, the community has been focused on how cosmic rays get filtered by the heliosphere. We know there is a connection between the amount of cosmic rays or UV that creates life. One of the main goals for phase two is to continue to press the pedal on this idea of a habitable atmosphere. And I think this is a connection that NASA loved—that we’re not just talking to ourselves, to the space physics community, we are reaching out to other communities like astrophysics, biology, and trying to figure out, is there an effect on climate?

The Brink: And this work also ties into space tourism, right?

Opher: Yes, NASA loved that piece. We will have, by the end, a radiation-intensity map. The number one danger for astronauts as they go for journeys of more than three years is radiation from cosmic rays. With a radiation map, when we try to colonize Mars and the moon, we can know how bad it’s going to be. It’s critical.

The Brink: And, of course, while you’re breaking new ground in science, your plan is to break barriers when it comes to diversity.

Opher: We need to bring empathy as a universal value. I think the outreach that we made in phase one—and I’m hoping to carry to phase two—was a vulnerable one, showing vulnerability while doing breakthrough science. This is unique.

We’re going to do breakthrough science, we’re going to do excellent science. But we’re going to do it not the way that usually science is done: factual, Type A, top down. I don’t want to be a leader like that. I want the group and the people around me to feel the heart of the big dream. It’s a new way, to try to say, “OK, you can be empathetic, you can be open and vulnerable and do incredible science. You don’t need to be this old school and ‘I know everything.’”

When I go to conferences, I have to arm myself like I’m going to a war. Every single person that is a little bit sensitive knows they have to arm themselves. But I try when I’m giving a talk in conferences, and as I’ve gone up in my career, to be vulnerable and true to who I am, to show them that you can be that and it’s fine. But still you look around, and science is done by people who are like, “I’m going to prove how wrong you are,” and that very macho type. But you don’t have to be like that. This is not just for women. I have so many guys that are sensitive that come to me and say, “Thank you, I can never show emotions.” It’s a human thing. So, that’s a major breakthrough in itself; I think it’s really transformative what we’re doing.