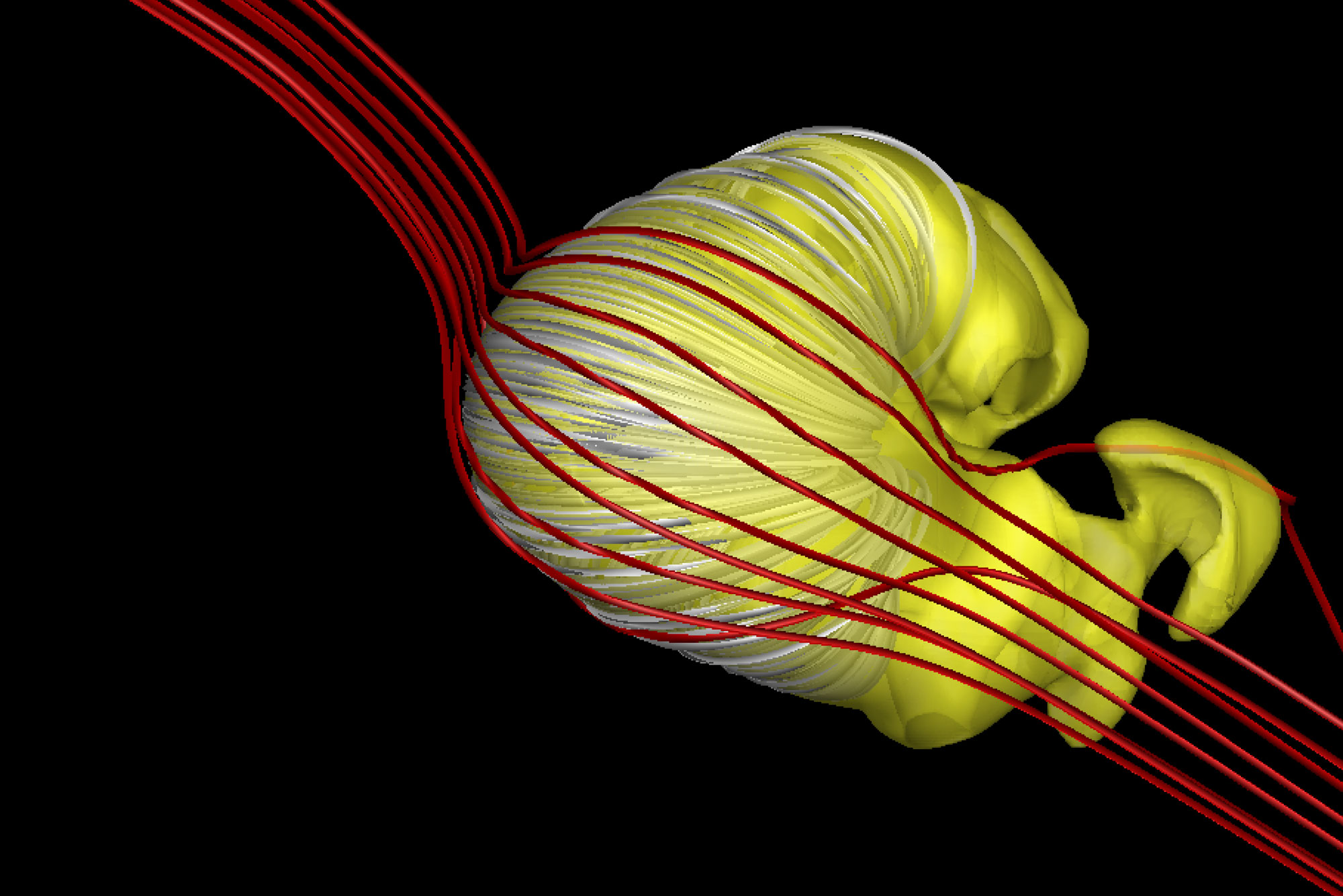 Is this what the heliosphere looks like? New research suggests so. The size and shape of the magnetic “force field” that protects our solar system from deadly cosmic rays has long been debated by astrophysicists. Image courtesy of Merav Opher, et. al

You are living in a bubble. Not a metaphorical bubble—a real, literal bubble. But don’t worry, it’s not just you. The whole planet, and every other planet in the solar system, for that matter, is in the bubble too. And we may just owe our very existence to it.

Space physicists call this bubble the heliosphere. It is a vast region, extending more than twice as far as Pluto, that casts a magnetic “force field” around all the planets, deflecting charged particles that would otherwise muscle into the solar system and even tear through your DNA, should you be unlucky enough to get in their way.

The heliosphere owes its existence to the interplay of charged particles flowing out of the sun (the so-called solar wind) and particles from outside the solar system. Although we think of the space between the stars as being perfectly empty, it is actually occupied by a thin broth of dust and gas from other stars—living stars, dead stars, and stars not yet born. Averaged across the whole galaxy, every sugar-cube-sized volume of space holds just a single atom, and the area around our solar system is even less dense.

The solar wind is constantly pushing out against this interstellar stuff. But the farther you get from the sun, the weaker that push becomes. After tens of billions of miles, the interstellar stuff starts to push back. The heliosphere ends where the two pushes balance out. But where is this boundary, exactly, and what does it look like?

Merav Opher, a professor of astronomy at Boston University’s College of Arts & Sciences and the Center for Space Physics, has been examining those questions for almost 20 years. And lately, her answers have been causing a stir.

Because our whole solar system is in motion through interstellar space, the heliosphere, despite its name, is not actually a sphere. Space physicists have long compared its shape to a comet, with a round “nose” on one side and a long tail extending in the opposite direction. Search the web for images of the heliosphere, and this is the picture you’re sure to find.

But in 2015, using a new computer model and data from the Voyager 1 spacecraft, Opher and her coauthor, James Drake of the University of Maryland, came to a different conclusion: they proposed that the heliosphere is actually shaped like a crescent—not unlike a freshly baked croissant, in fact. In this “croissant” model, two jets extend downstream from the nose rather than a single fade-away tail. “That started the conversation about the global structure of the heliosphere,” says Opher.

Hers wasn’t the first paper to suggest that the heliosphere was something other than comet-shaped, she points out, but it gave focus to a newly energized debate. “It was very contentious,” she says. “I was getting bashed at every conference! But I stuck to my guns.”

Then, two years after the “croissant” debate began, readings from the Cassini spacecraft, which orbited Saturn from 2004 until 2017, suggested yet another vision of the heliosphere. By timing particles echoing off the boundary of the heliosphere and correlating them with ions measured by the twin Voyager spacecraft, Cassini scientists concluded that the heliosphere is actually very nearly round and symmetrical: neither a comet nor a croissant, but more like a beach ball. Their result was just as controversial as the croissant. “You don’t accept that kind of change easily,” says Tom Krimigis, who led experiments on both Cassini and Voyager. “The whole scientific community that works in this area had assumed for over 55 years that the heliosphere had a comet tail.”

Now, Opher, Drake, and colleagues Avi Loeb of Harvard University and Gabor Toth of the University of Michigan have devised a new three-dimensional model of the heliosphere that could reconcile the “croissant” with the beach ball. Their work was published in Nature Astronomy on March 16.

Unlike most previous models, which assumed that charged particles within the solar system all hover around the same average temperature, the new model breaks the particles down into two groups. First are charged particles coming directly from the solar wind. Second are what space physicists call “pickup” ions. These are particles that drifted into the solar system in an electrically neutral form—because they aren’t deflected by magnetic fields, neutral particles can “just walk right in,” says Opher—but then had their electrons knocked off.

The New Horizons spacecraft, which is now exploring space beyond Pluto, has revealed that these particles become hundreds or thousands of times hotter than ordinary solar wind ions as they are carried along by the solar wind and sped up by its electric field. But it was only by modeling the temperature, density, and speed of the two groups of particles separately that the researchers discovered their outsized influence on the shape of the heliosphere.

That shape, according to the new model, actually splits the difference between a croissant and a sphere. Call it a deflated beach ball, or a bulbous croissant: either way, it seems to be something that both Opher’s team and the Cassini researchers can agree on.

The new model looks very different from that classic comet model. But the two may actually be more similar than they appear, says Opher, depending on exactly how you define the edge of the heliosphere. Think of transforming a gray scale photo to black-and-white: the final image depends a lot on exactly which shade of gray you pick as the dividing line between black and white.

And then there’s the matter of those DNA-shredding interstellar particles. Researchers are still working on what, exactly, they mean for life on Earth and on other planets. Some think that they actually could have helped drive the genetic mutations that led to life like us, says Loeb. “At the right amount, they introduce changes, mutations that allow an organism to evolve and become more complex,” he says. But the dose makes the poison, as the saying goes. “There is always a delicate balance when dealing with life as we know it. Too much of a good thing is a bad thing,” Loeb says.

When it comes to data, though, there’s rarely too much of a good thing. And while the models seem to be converging, they are still limited by a dearth of data from the solar system’s outer reaches. That is why researchers like Opher are hoping to stir NASA to launch a next-generation interstellar probe that will cut a path through the heliosphere and directly detect pickup ions near the heliosphere’s periphery. So far, only the Voyager 1 and Voyager 2 spacecrafts have passed that boundary, and they launched more than 40 years ago, carrying instruments of an older era that were designed to do a different job. Mission advocates based at Johns Hopkins University Applied Physics Laboratory say that a new probe could launch some time in the 2030s and start exploring the edge of the heliosphere 10 or 15 years after that.

“With the Interstellar Probe we hope to solve at least some of the innumerous mysteries that Voyagers started uncovering,” says Opher. And that, she thinks, is worth the wait.

The researchers thank the staff at NASA Ames Research Center for the use of the Pleiades supercomputer. This work was also supported by NASA and by the Breakthrough Prize Foundation.

There are 4 comments on Reimagining Our Solar System’s Protective Bubble, the Heliosphere

Reimagining Our Solar System’s Protective Bubble, the Heliosphere
4
share this