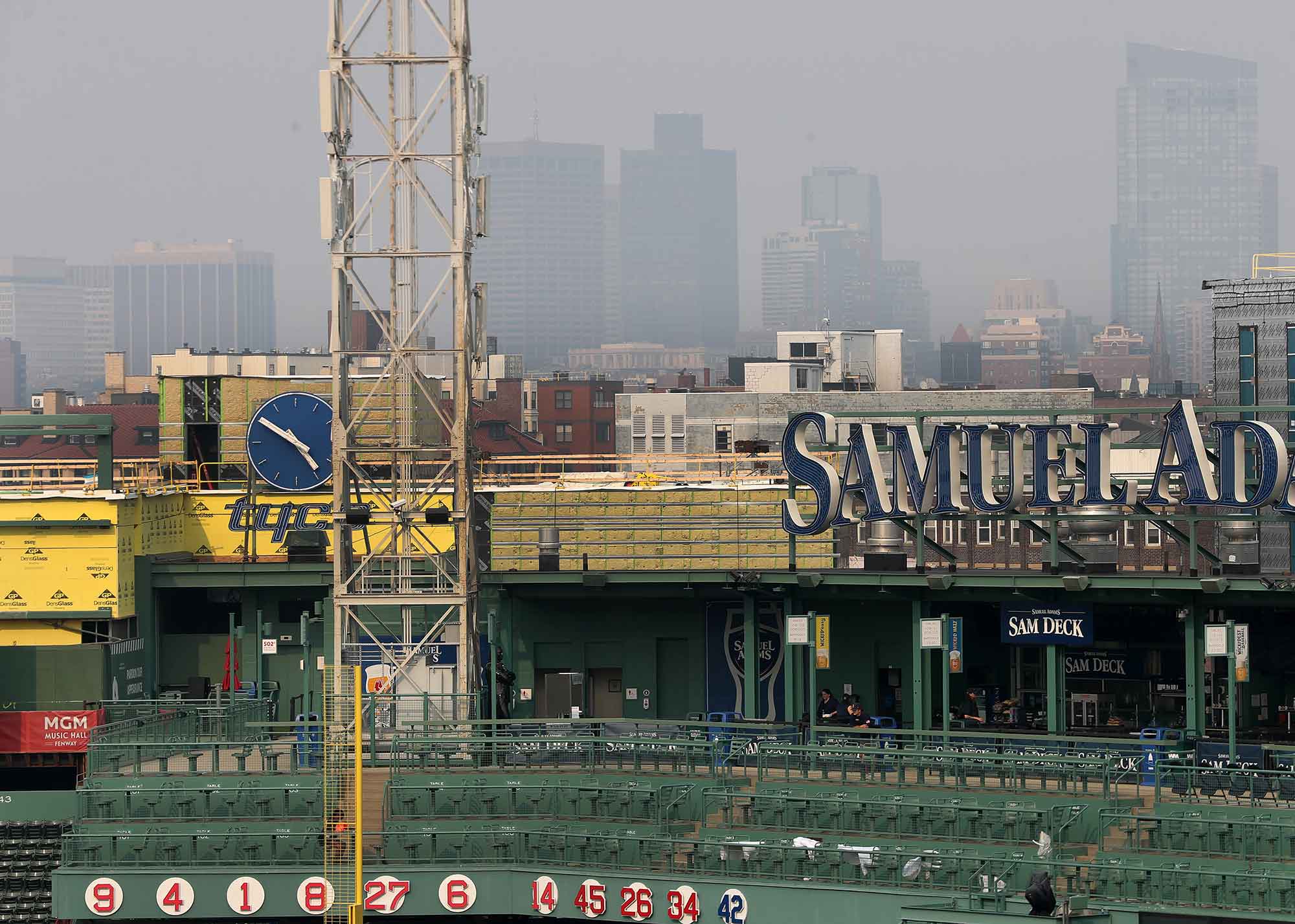 During the July 26, 2021, game between the Boston Red Sox and Toronto  Blue Jays at Fenway Park, heavy smoke from western US and Canadian forest fires were seen blanketing Boston’s skies. Photo by Jim Davis/The Boston Globe via Getty Images

On Monday, the air quality in Boston and the greater New England area was so bad that it was only rivaled by the areas in Northern California and Oregon currently on fire. An interactive map from the National Oceanic and Atmospheric Administration showed how smoke from the wildfires out west were being carried across the continental US by winds and the jet stream. In response to the blanket of smoke engulfing the commonwealth’s skies, the Massachusetts Department of Environmental Protection issued an air quality alert.

Around Boston, people reported not only seeing a film of smoke in the skies, but also smelling the scent of wood burning. Firefighters across the state fielded calls from concerned residents who worried that a fire was burning nearby. This is the second time in the last two weeks that smoke from the western forest fires has been carried to New England—but the smoke was markedly thicker and more pungent this time around.

With scientists predicting that our climate will continue to get hotter and drier, exacerbating normal patterns of forest fires, The Brink reached out to Boston University environmental earth scientist Mark Friedl for help understanding what these changes mean for our planet and for human health. Friedl, an expert in using NASA satellite imaging to interpret large-scale environmental trends, recently published new research findings indicating that forest fires in Earth’s northernmost forests could accelerate climate change—potentially locking the planet in a feedback loop where drier climate causes more fires and those fires, in turn, speed up global warming. “Fires are intensifying, and when forests burn, carbon is released into the atmosphere,” Friedl says about those findings.

Friedl, a BU College of Arts & Sciences professor of earth and environment and interim director of BU’s Center for Remote Sensing, answers four questions posed by The Brink about the effects of western wildfire smoke over New England and the US.

The Brink: Based on your research and expertise in remote global sensing and monitoring, what do these current wildfires tell us about where Earth’s climate is going?

Friedl: These fires are further evidence of how climate change is impacting ecosystems and forests. Fire is normal in forested ecosystems, especially in western forests that tend to be drier, and hence more fire-prone, relative to forests in the eastern US. That said, the increased frequency, intensity, and scale of fires we’ve seen in recent years is a clear by-product of climate change. They are the proverbial canary in the coal mine, telling us that the climate is changing, and it’s going to increasingly impact our lives on a day-to-day basis.

The Brink: Does this much smoke, spreading across the country, impact vegetation elsewhere besides the forests that are burning?

Friedl: Smoke like we experienced today tends to be pretty short-lived and doesn’t have much impact on vegetation across the country. Indeed, it’s not entirely unheard of for smoke to travel long distances in the atmosphere, and it’s not unprecedented for smoke from fires in the western US to make it all the way to the eastern US.

The Brink: What about the effects on human health?

Friedl: Most of the time, the smoke is diffuse and concentrated in the upper atmosphere, and so we just experience it as haze. What we experienced [Monday], with very poor air quality, is qualitatively different, and is pretty severe from a public health perspective. Hopefully, this is not a harbinger of things to come. It’s also worth noting that at least some of the smoke we see right now is coming from fires in western and central Canada, and not just from the western US.

The Brink: With wildfires becoming more common as the climate gets hotter and drier, what will happen if fires burn faster than forests can replenish themselves? Can you predict what the future dynamics look like in the West and Pacific Northwest forests?

Friedl: If the climate continues to warm and becomes drier in the west, at some point some forests will not be able to recover. If there’s a silver lining in these fires, it’s that hopefully they provide a wake-up call for society to change and start to meaningfully address the climate crisis.