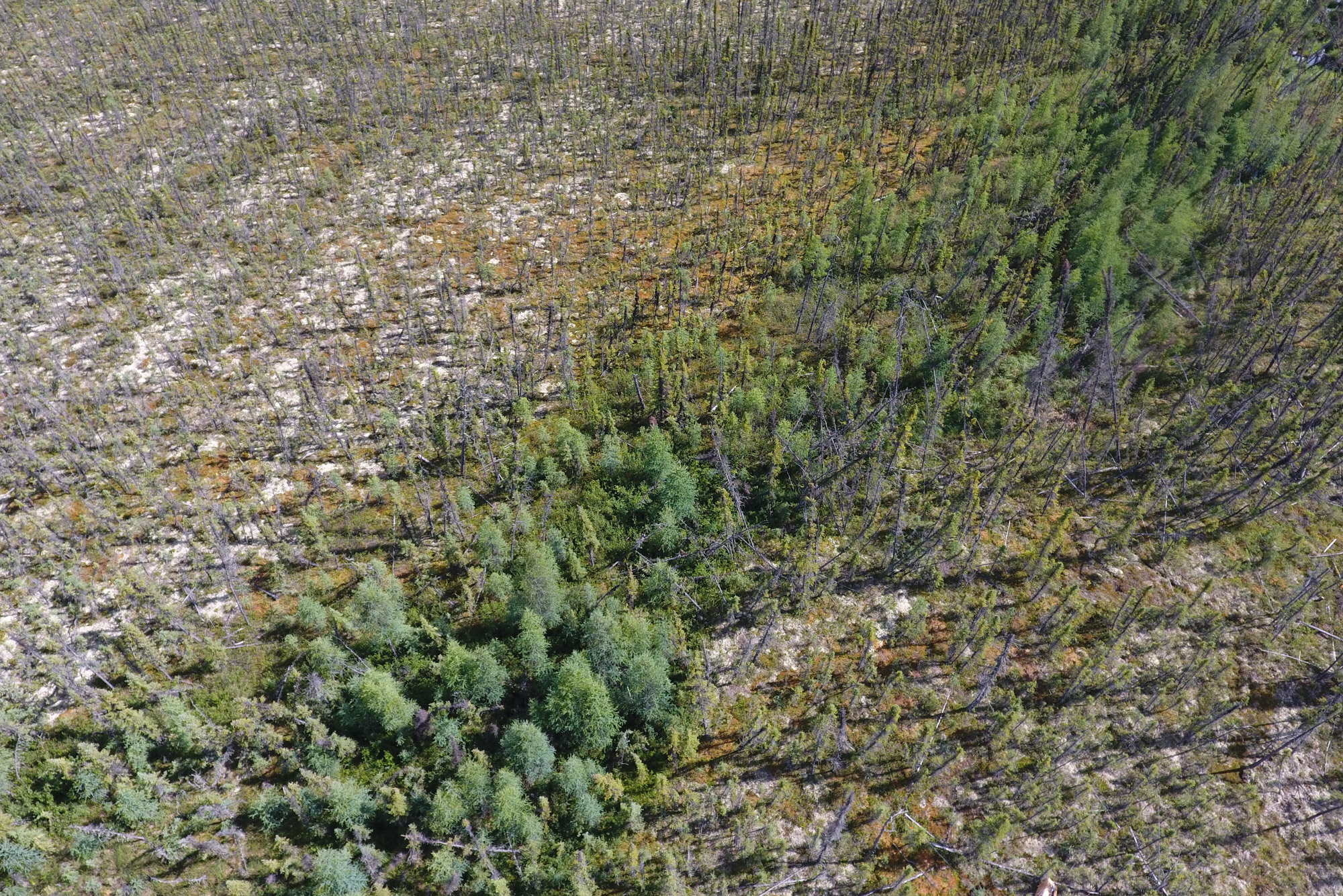 The study focused on wooded peatland and forests like the landscape pictured here near the town of Wrigley in Canada’s Northwest Territories. This drone imagery was taken by then-BU PhD candidate Jonathan Wang during June 2017. Courtesy of Jonathan Wang

New research indicates that the computer-based models currently used to simulate how Earth’s climate will change in the future underestimate the impact that forest fires and drying climate are having on the world’s northernmost forests, which make up the largest forest biome on the planet. It’s an important understanding because these northern forests absorb a significant amount of Earth’s carbon dioxide.

The finding, reached by studying 30 years of the world’s forests using NASA satellite imaging data, suggests that forests won’t be able to sequester as much carbon as previously expected, making efforts to reduce carbon emissions all the more urgent.

“Fires are intensifying, and when forests burn, carbon is released into the atmosphere,” says Boston University environmental earth scientist Mark Friedl, senior author on the study published in Nature Climate Change. “But we’re also seeing longer growing seasons, warmer temperatures, which draws carbon out of the atmosphere [and into plants]. More CO2 in the atmosphere acts as a fertilizer, increasing growth of trees and plants—so, scientifically, there’s been this big question out there: What is happening on a global scale to Earth’s forests? Will they continue to absorb as much carbon as they do now?”

Today’s forests capture about 30 percent of all human-related CO2 emissions, which Friedl calls a “huge buffer on anthropogenic climate change.” The new study, however, reveals that scientists have so far been underestimating the impact that fires and other disturbances—like timber harvests—are having on Earth’s northern forests and, at the same time, have been overestimating the growth-enhancing effect of climate warming and rising atmospheric CO2 levels.

“Current Earth systems models appear to be misrepresenting a big chunk of the global biosphere. These models simulate the atmosphere, oceans, and biosphere, and our results suggest [the model-based simulation of northern forests] has been way off,” says Friedl, a BU College of Arts & Sciences professor of earth and environment and interim director of BU’s Center for Remote Sensing. He is an expert in utilizing satellite imaging data to monitor Earth’s ecosystems on a global scale.

“It is not enough for a forest to absorb and store carbon in its wood and soils. For that to be a real benefit, the forest has to remain intact—an increasing challenge in a warming, more fire-prone climate,” says Jonathan Wang, the paper’s lead author. “The far north is home to vast, dense stores of carbon that are very sensitive to climate change, and it will take a lot of monitoring and effort to make sure these forests and their carbon stores remain intact.”

Working on his PhD in Friedl’s lab, Wang researched new ways to leverage the record of data collected from the long-standing Landsat program, a joint NASA/US Geological Survey mission that has been extensively imaging Earth’s surface from satellites for decades, to understand how Earth’s forests are changing. Wang says new computational and machine learning techniques for combining large remote sensing datasets have become much more advanced, “enabling the monitoring of even the most remote ecosystems with unprecedented detail.”

He developed a method to gain richer information from 30 years of Landsat data by comparing it with more recent measurements from NASA’s ICESat mission, a satellite carrying laser-based imaging technology, called LiDAR, that can detect the height of vegetation within a forest. Landsat, on the other hand, primarily detects forest cover but not how tall the trees are.

Comparing the newer LiDAR measurements with imaging data gathered from Landsat during the same time period, the team then worked backwards to calculate how tall and dense the vegetation was over the last three decades. They could then determine how the biomass in Earth’s northern forests has changed over time—revealing that the forests have been losing more biomass than expected due to increasingly frequent and extensive forest fires.

Specifically, Friedl says, the forests are losing conifers, trees that are emblematic of Earth’s northern forests, and for good reason. “Fires come in and burn, and then the most opportunistic types of species grow back first—like hardwoods—which then get replaced by conifers such as black spruce,” he says. “But over the last 30 years, which isn’t a long time frame in the context of climate change, we see fires taking out more forests, and we see hardwoods sticking around longer rather than being replaced by conifers.”

Conifers are better adapted to cold climates than hardwoods, which could potentially be contributing to the dwindling overall biomass of the forests.

“An often-stated argument against climate action is the supposed benefits that far northern ecosystems and communities will enjoy from increased warmth,” Wang says. He hopes the study’s discovery will help people understand that the global climate crisis has serious issues for the far north, as well. “It may be greening, in some sense,” he says, “but in reality the climate-driven increase in wildfires is undoing much of the potential benefits of a warming, greening north.”

Wang and Friedl’s findings shed light on a question that would have been difficult to answer without the help of NASA’s “eyes in the sky.”

“Fire regimens are changing because of climate, and many areas of the world’s forests are in uninhabited areas where the effects of intense fires may not be easily noticed,” Friedl says. “When big chunks of real estate in places like California go up in flames, that gets our attention. But northern forests, which hold some of the largest stocks of carbon in the world, are being impacted by fires more than we realized until now.”

This research, part of NASA’s Arctic-Boreal Vulnerability Experiment (ABoVE), was funded by the National Science Foundation, NASA, the US Dept of Energy Office of Science, and the University of California Lab Fees program, and was supported by the World Climate Research Programme and the Earth System Grid Federation.