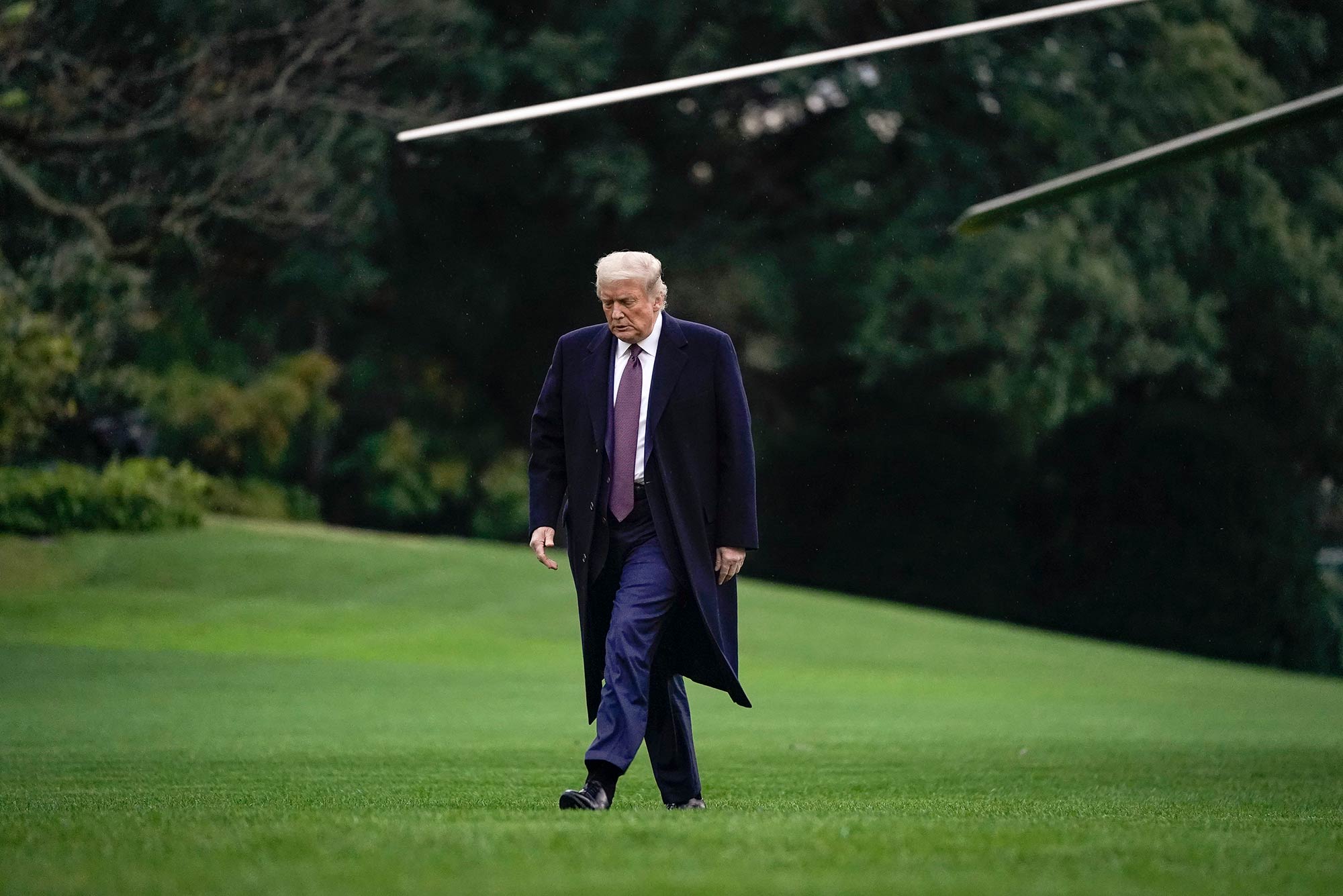 President Trump, exiting Marine One on the White House South Lawn October 1, traveled to Bedminster, N.J., for a roundtable event with supporters and a fundraising event, apparently not knowing he was infected with the coronavirus. Photo by Drew Angerer/Getty Images

President Trump Has COVID-19. What Now? Has Anything Like This Ever Happened Before?

Conversations with two BU experts on the history, politics, and precedence of the stunning news

The news broke at 1 am Friday when President Trump tweeted it out. Both he and First Lady Melania Trump have tested positive for the coronavirus and were immediately beginning life under quarantine at the White House.

It was historic news on numerous levels—a president catching a deadly virus that has killed more than a million people worldwide, an election one month away suddenly thrown into turmoil, presidential debates that play a critical role for voters thrown into doubt, the 25th Amendment, Presidential Disability and Succession, possibly coming into play.

Thomas Whalen, a  College of General Studies associate professor of social sciences, and 20th-century US history scholar Bruce J. Schulman, BU’s William E. Huntington Professor of History, in the College of Arts & Sciences, spoke with BU Today Friday about the consequences and historical perspective of the news and why the November 3 election cannot be delayed.

With Thomas Whalen and Bruce Schulman

BU Today: Are there any presidential historical precedents to news of this nature?

Thomas Whalen: Woodrow Wilson suffered a debilitating stroke in 1919, and essentially his wife was running the country. Grover Cleveland was at the start of his second term in 1893, and he discovered a tumor in his mouth. He had, on a yacht, surgery to cut it out, and a good chunk of his upper jaw was removed. He did it in secret because he feared the impact on the financial markets.

Dwight Eisenhower had a heart attack and was diagnosed before the 1956 election with Crohn’s disease. Before the election, there was a major international crisis, the Suez crisis. [Vice President Richard] Nixon had temporary [power]; he sat in on Cabinet meetings and national security meetings. Nixon did a fairly competent job, probably one of his finest hours.

But there are unforeseeable ramifications. John F. Kennedy had serious back pain and became addicted to painkillers. In 1961, he was scheduled for a summit with Nikita Khruschev of the Soviet Union. Kennedy was pepped up on amphetamines, and his performance at the summit was disastrous. Khruschev interpreted that he was a weak man. Just a few months later, the Berlin Wall was constructed. The following year, Khruschev felt he could put nuclear missiles in Cuba, which resulted in the Cuban Missile Crisis.

The technical thing you need to understand is that it wouldn’t be chaos if Trump or Biden were to die, because when you vote, you don’t vote for Biden or Trump, you vote for electors who are pledged to vote for them. You’re just choosing the electors. If those candidates die, you’re still voting for those electors. Those electors will presumably vote for the candidates.

Since the Jackson era, the parties select the nominees. What would happen is both parties have procedures for replacing a candidate who dies. The national [party] committee would meet and choose the replacement nominee. As long as that happens before the meeting of the Electoral College, which always happens in December, you’re fine.

BU Today: What are the odds that Vice President Mike Pence might have to assume the presidency temporarily and be president on Election Day?

Whalen: That’s one of the great unknowns. It’s never happened on the eve of an election, and we don’t know President Trump’s physical condition. Can he still perform the functions of office? If he can, no problem. But if he can’t, that is when the 25th Amendment is supposed to be invoked.

The other wild card is, the electors [of the Electoral College] could say, we can’t go forward, we’re not going to cast our ballots. That could result in the election being thrown into the House of Representatives. You vote by state delegations, so Republicans control more states than Democrats. But if they can’t get together within the House, it goes to the line of succession, and that would mean Nancy Pelosi would become president.

Schulman: They don’t have to choose Pence or Harris, they could choose anybody. Each party has their own rules. I think with both parties the candidate has to be chosen by the majority of the committee so they have some kind of procedure for multiple ballots.

The funny thing that happened with James Sherman was they scheduled a meeting, but because the Republicans lost—and 1912, you’ll remember, was a three-way election in which Theodore Roosevelt ran as a Bull Moose progressive candidate—and Taft won only two states, I think, they decided it wasn’t worth it.

BU Today: In your view, will this news cost Trump votes?

Whalen: Absolutely. Especially if they are on the fence. Joe Biden in the [September 29] debate said [Trump] was irresponsible for his blithe treatment of social distancing and mask-wearing. You would say now that Biden was proven correct, and that President Trump’s cavalier attitude has put a lot of people’s health at risk. He had these huge rallies, and there were not a lot of masks that I could see. The White House might be a COVID hot zone: was the National Security Council exposed? Was the Council of Economic Advisers? Can the United States function as a national government?

BU Today: How will Trump have to rethink his campaign style?

Whalen: He would have to do everything remotely, if he were up to it. Talking key swing states, he was relying on the fact that he could go into those states, like he did in 2016, and get to the finish line by doing that retail politics, which he is a master of. Now it doesn’t look like he’s going to have that opportunity. The clock is against him. With four weeks to go, there isn’t much time left.

BU Today: With the First Couple testing positive, do you think it might impact how Trump’s own supporters view the coronavirus and the precautions that he has mocked?

Whalen: It might for some, but overall, human nature usually says they’ll double down even more on their initial position because they don’t want to admit they were wrong. It’s sad but true. I think they’ll be more fervently loyal to him and what he has said on the campaign trail. I think the only people who’ll be affected are the ones who were on the fence or live in areas of the country that have not been seriously affected by the virus.

BU Today: How did you first learn about the news and what was your initial reaction?

Schulman: My partner’s phone started blowing up at 5, 5:30 am. We said, “Who’s calling us at 5:30?” She looked at her phone and said, “Omigod, Trump and Melania tested positive for COVID. How is this going to affect the election?” I said, “Well, this sort of points out that his recklessness in refusing to take the most common-sense public health advice of his own experts was wrong.” She said, “But if he has a very mild case, then he can pass himself off as a kind of superman and say, ‘Look, I was right, it wasn’t very serious—it’s fake news, people are exaggerating it only to harm my reelection campaign.’” Then we realized that we don’t really know how the election is going to play out.

If Trump has a very serious case and if he dies, that’s a very different result than if he’s just asymptomatic and recovers. He was on the same stage a few feet away from, and yelling at, Biden for two hours. What if Biden was infected? Will Biden have a serious case, will Biden die? Without actually knowing what’s going to happen, it’s very hard to speculate.

Whether Trump gets seriously [ill] or not—you can run the thought experiment of what the political impact will be if he gets very seriously sick and dies. It changes everything.

If he doesn’t [get seriously ill], my speculation is it doesn’t change much. Everything I’ve read suggests that almost everyone has made up their mind and that the real issue is going to be the twin problems of turnout and counting. It’s hard to imagine anyone changing their mind.

BU Today: It feels like such a chaotic time—with the pandemic, the bitter partisan divide, Trump’s out-of-control tweeting and refusal to denounce white supremacists, the debate that went off the rails. Is there historic precedent for this kind of turmoil?

Schulman: 2020 has been one shock after another. We’re getting kind of worn down.

We had total war during World War II. We had the Civil War, the Great Depression. Epidemic disease has been a real part of people’s lives for most of the country’s history, as have periods of sustained unemployment. The fact that there are multiple crises—not that it’s common, but it’s happened before—but we’re having all this at a time when so many institutions that held things together are not functioning well or are under siege. And also there are the unprecedented changes in the communications landscape, in which information, misinformation, disinformation travel so rapidly. We put all those things together and then everything is kept at a boil constantly.

The fundamental institutions of American life are vulnerable in ways they hadn’t been even during the Depression and World War II. It does raise the question of presidential leadership.

If you think about the crises of the 1930s, there was certainly a chance that democracy and capitalism would not survive. There are many reasons that didn’t happen in the United States. Roosevelt’s leadership played a really important role in creating viable alternatives to revolution and antidemocratic movements that were at work in the United States and in other places and in successfully expanding and including more people in the democracy. You could imagine that with a different president in the White House, this crisis wouldn’t be happening.

The fact is, whatever you’ve thought of any previous president of our lifetime, there’s never been one like this one.

President Trump Has COVID-19. What Now? Has Anything Like This Ever Happened Before?

There is 1 comment on President Trump Has COVID-19. What Now? Has Anything Like This Ever Happened Before?