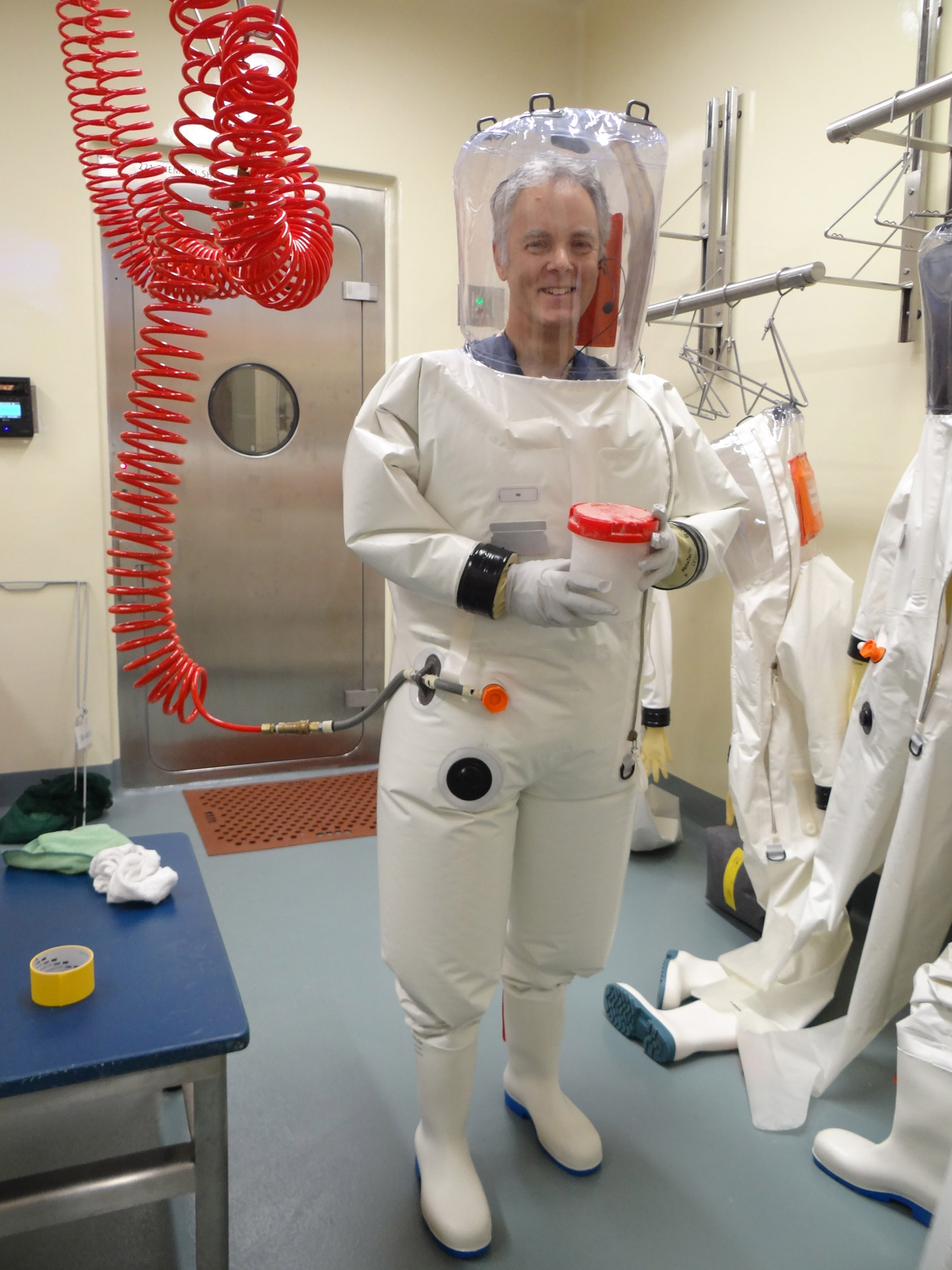 BU microbiologist Robert Davey is thrilled about getting the green light to begin screening potentially life-saving drug candidates against live SARS-Cov-2, vials of which are carefully packed into the container he’s holding in this March 19, 2020, photo. His BU NEIDL team is used to wearing full biocontainment suits for work on far deadlier viruses, like Ebola. So although the novel coronavirus can safely be worked on at a Biosafety Level 3 facility, they’re researching it in the highest possible containment setting, the NEIDL Biosafety Level 4 lab. Photo by Callie Donahue

Scientists at Boston University’s National Emerging Infectious Diseases Laboratories (NEIDL), led by microbiologist Robert Davey, this week started suiting up to conduct research on live samples of the novel coronavirus, the first team in Boston to start such work on the global pandemic.

This type of emergency—a fast-spreading virus outbreak—is precisely what the NEIDL, now in its second year of full operation, was made for, Davey says. NEIDL’s work will involve a number of studies scientists are planning related to SARS-CoV-2, the virus that causes the disease called COVID-19.

“As part of the Greater Boston Consortium on Pathogen Readiness (GBCPR), we have already started collaborating with teams of researchers in the Greater Boston area to better understand the way the novel coronavirus infects cells and leads to COVID-19, toward identifying effective treatments and vaccine candidates,” says Ronald Corley, NEIDL’s director.

Davey’s team specializes in pitting thousands upon thousands of drugs—small molecules made of different chemical concoctions—against lab cultures of cells infected with contagions, allowing them to rapidly detect which drugs are most effective at halting or reducing infection.

They expect to test thousands of different drugs for their ability to curb COVID-19 infection—all within a matter of weeks. Their work comes as the number of coronavirus cases rises at an alarming rate in the United States, jumping by 40 percent in the 24 hours alone from Wednesday to Thursday. (There are now more than 11,000 cases across all 50 states.)

Typically, Davey’s team handles some of the world’s most lethal diseases, like Ebola or Marburg fevers, inside a Biosafety Level 4 (BSL-4) laboratory, which has the highest possible level of biosafety containment used for infectious agents that pose especially high risk to humans. At the NEIDL, that’s how Davey and the members of his lab are set up to do their work—in full biocontainment suits, each with their own air supply—not unlike an earthly version of a spacesuit.

Our goal is to find drugs that can reduce viral burden and alleviate the highest levels of infection.

Although some people might find the suits claustrophobic, Davey’s team has become more comfortable working inside the suits than outside. So, even though SARS-Cov-2 requires only a BSL-3 lab—no spacesuits needed—Davey and his team will treat it just as they would a far deadlier pathogen like Ebola.

“We’re going to be researching the virus at BSL-4 level, taking the virus to a higher level of containment than required,” Davey says. “Our specialized equipment for doing the drug screening is set up in the BSL-4 and there is no equivalent at BSL-3. So it is mostly out of practical concern for doing things rapidly. Of course, [doing the work at BSL-4 also adds] an extra layer of safety.”

And there’s another silver lining to the way Davey’s team is set up—their uniforms and gear are not in short supply. The personal protection equipment that researchers have to wear for BSL-3 work is the same that’s used by clinicians in hospitals. In Boston and around the country, those precious resources are in short supply.

“Some other locations are having problems doing work because of this,” Davey says. But the gear his team uses is uniquely designed for their level of work. “BSL-4 suits can only be used in BSL-4 labs,” he says.

The NEIDL is among only a handful of facilities in the United States with both BSL-3—the type of lab facility required to work with pathogens that pose a danger if inhaled, like the novel coronavirus—and BSL-4 facilities. And so far, partly because of the shortage of BSL-3 gear, it’s the only site in Boston that has the potential to work on live coronavirus.

It has taken Davey, Corley, and NEIDL’s safety and operations teams weeks of working closely with the city’s public health officials to get the necessary approvals and permits for the research on live coronavirus samples to get underway. The list of requirements that must be met for work to begin on any new pathogen is daunting—rightfully so—and the NEIDL team has been flying at breakneck pace since January to get its official letter of approval from the Boston Public Health Commission.

“To get to this point was a huge effort where many people went out of their way to make it happen,” Davey says. “We did everything by the book to make sure we are working safely.”

With that process finally behind them, he is thrilled to be heading into the NEIDL’s BSL-4, coronavirus vials firmly gripped in his double-gloved hands. In the lab, he and his team will employ their unique drug screening setup, using small and efficient robots to bust through traditional bottlenecks and inefficiencies of working with live cultures, to help them simultaneously evaluate potential drug compounds on 384 different wells of human lung cells infected with SARS-Cov-2.

“Compounds stick to, or get in between, virus proteins like a wedge, blocking them from coming together and functioning properly,” Davey says.

Inside the culture plates, the researchers will dose SARS-CoV-2–infected lung cells with a huge variety of compounds, he says. Some concoctions are derived from already-FDA-approved antiviral medications—which would make for an especially quick path toward approval for use in humans infected with COVID-19—and some are completely novel drug candidates designed by chemists working with John Porco, director of BU’s Center for Molecular Discovery (BU-CMD).

“We maintain a chemical collection of thousands of compounds designed for a variety of biological uses,” Porco says. “We’ve given the NEIDL—with which we’ve had a long-standing collaboration to develop antiviral agents—our entire collection to test against the novel coronavirus. We think there will be some interesting drug candidates that emerge from this screen.”

Davey says his team will be watching the infected lung cell cultures closely to see how SARS-CoV-2 responds to each different compound from the BU-CMD. Some compounds are designed to block viruses from entering host cells, and others interfere with a virus’ ability to replicate its genetic material. Still others scramble a virus’ ability to assemble itself and proliferate infection after it’s released from dead host cells.

“Our goal is to find drugs that can reduce viral burden and alleviate the highest levels of infection,” Davey says. “The golden standard would be to find small molecules that halt COVID-19 in its tracks and prevent it from transmitting. To get there, of course, is hard. We have to be careful that these molecules don’t otherwise affect a person’s health or cause unintended side effects.”

Yet Davey is optimistic, confident even, that good news is on the way. “Undeniably, we will identify something that has reasonable potency against the novel coronavirus,” he says. “Getting something with high potency is harder, but that’s where great chemists come into play.”

Davey and Porco are collaborating on this front and plan to fine-tune promising compounds to increase their effectiveness against COVID-19, without causing side effects, however they can. Porco and his team at BU-CMD also specialize in small molecules called macrocycles—chemical compounds that fit into receptors on the surfaces of viruses like a key fits into a lock, blocking other molecular machinery from gaining entry as long as they stay fitted in place.

“Between basic chemistry and drug discovery efforts and the NEIDL, BU is in a great position to be working on COVID-19,” Porco says.

Davey’s team has a ton of experience identifying drug candidates from their work finding molecules that interrupt the Ebola virus from infecting and transmitting. Before joining the NEIDL at BU, Davey’s team was stationed at Texas Biomedical Research Institute, another BSL-4 site in the United States, where they tested drug compounds against live Ebola virus. They were some of the first people to witness the efficacy of a compound called REGN-EB3, a triple-antibody cocktail made by pharmaceutical company Regeneron, which in a clinical trial last year reduced the mortality rate for the deadly Ebola virus from 70 percent to as low as 6 percent when given to patients early.

With work by Davey’s team now underway, Corley says additional research efforts will soon launch at the NEIDL, including a study of the molecular mechanisms that the novel coronavirus uses to enter host cells and replicate itself. NEIDL researchers will also seek to identify other cell types that are impacted following initial viral infection of the lungs, and will undertake other studies related to COVID-19’s disease progression and spread. Meanwhile, other NEIDL teams will model the COVID-19 infection in mice with humanized immune systems, helping them understand the immune response to the virus, which will allow them to identify the best antibodies to use in a future vaccine.

“Many more studies involving BU scientists and others in the GBCPP are soon to follow,” Corley promises.

And the herculean effort it took to get the live coronavirus research off the ground will pay off in future dividends, Davey adds. “Of course, we learned a lot about how we can improve the necessary approvals process, and we will be even better prepared if the unexpected occurs again in the future.”

Federal scientific agencies are rolling out funding calls for COVID-19-related research. New opportunities from the Centers for Disease Control and Prevention, National Institutes of Health, Department of Defense, Department of Energy, Department of Health & Human Services, and the National Science Foundation can be found here.

Live Coronavirus Research Gets Underway at BU NEIDL
9
share this