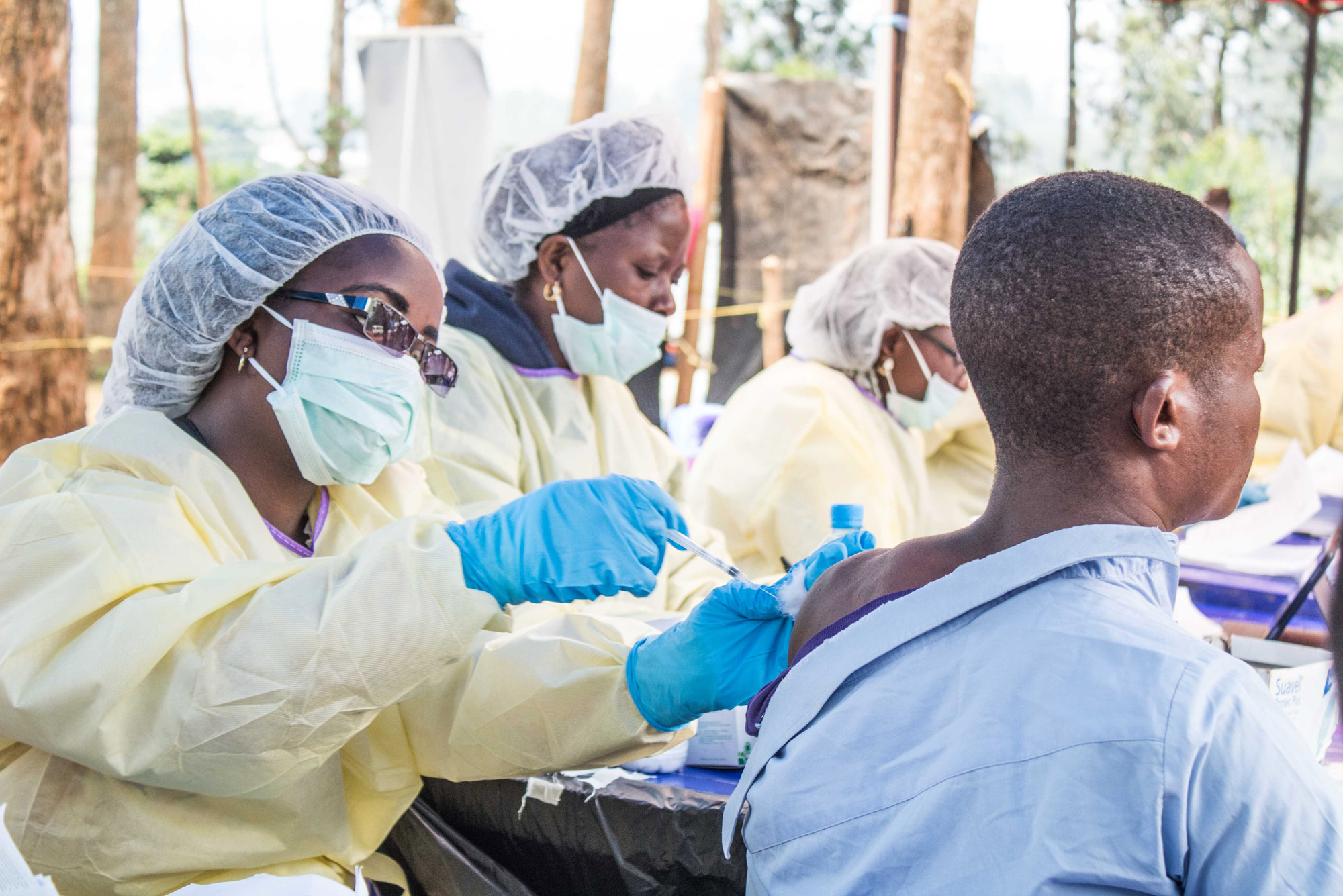 Robert Davey vividly remembers the first time he saw the power of REGN-EB3, the triple-antibody cocktail made by pharmaceutical company Regeneron, which in a recent clinical trial has reduced the mortality rate for the deadly Ebola virus by stunning amounts—from 70 percent to as low as a reported 6 percent when given to patients early enough.

Davey was working at Texas Biomedical Research Institute, before he and his team moved to the Boston University National Emerging Infectious Diseases Laboratories (NEIDL). Both labs are among only a handful in the US with Biosafety Level 4 (BSL-4) status, the highest level of biosafety containment used for infectious agents that pose extreme danger to humans. “We tested the Regeneron treatment in a guinea pig model of the disease and we found that REGN-EB3 saved the guinea pigs from Ebola infection,” says Davey, now a microbiologist at NEIDL and BU’s School of Medicine (MED). “Then, we took it to a higher animal model, monkeys, and we found that the antibody mixture was a miraculous cure. The animals were quite ill, and we gave them the treatment and most recovered overnight. We said it was like a miracle, that’s how it felt to see it.”

About two-thirds of people infected with the Zaire strain of Ebola have died during the current Democratic Republic of the Congo (DRC) outbreak. But Regeneron’s REGN-EB3 and another antibody-based therapeutic, mAb114 made by Ridgeback Biotherapeutics, have drastically improved the survival rates. Now, about two-thirds of people treated with either drug survive Ebola infection.

“We have finally reached a point where we have therapeutic influence over Ebola,” says NEIDL researcher Anthony Griffiths, a MED associate professor of microbiology.

But Griffiths, Davey, and others cautioned that treating Ebola is a long way from curing it.

To survive Ebola, get to the clinic sooner

At NEIDL, Davey and Griffiths are setting up systems that can pit promising therapeutics against live Ebola virus in the BSL-4 lab. They envision an “open source” model where scientists from industry and academia can submit small drug candidates that they want to test for efficacy against Ebola or other deadly pathogens like the Marburg virus.

“How do you get cures where they need to be as soon as possible during an outbreak?” Davey says. A big part of that, he says, is being able to quickly clear a path for promising new therapeutics like REGN-EB3 and mAb114 to gain approval for experimental use in humans. “Griffiths and I are one of the few groups in the whole country that can conduct well-documented studies that can be sent to the FDA for licensure.”

REGN-EB3 is made up of three antibodies that glom onto the virus, preventing it from replicating inside a host’s body, and triggering the host’s immune system to kill the infected cells. The triple-antibody cocktail was developed in “humanized” mice genetically engineered to contain the parts of the human immune system that create antibodies to fight infection. “These mice, when exposed to parts of the [Zaire strain of] Ebola virus, mounted an immune response very similar to what would happen in a human,” Davey says. That allowed Davey and other scientists to select the antibodies that were most effective in neutralizing Ebola virus.

What happens to survivors [treated with REGN-EB3 or mAb114]? Do they have a better chance of not having Ebola virus disease syndrome?

Made of a single antibody, mAb114 was developed a different way. It was derived directly from a human Ebola survivor whose immune system had been able to fight off infection from the Zaire strain.

In eastern Congo, REGN-EB3 and mAb114 were administered alongside two other experimental drugs, the antibody-based ZMapp and an antiviral called remdesivir, in a trial administered by the National Institutes of Health (NIH) and the Institut National de Recherche Biomédicale (INRB).

“They’ve treated more than 600 patients in the randomized control trial at this point,” says Nahid Bhadelia, a NEIDL researcher, MED assistant professor of infectious diseases, and the medical director of the Special Pathogens Unit at Boston Medical Center. She has volunteered as a healthcare worker during the 2014–2016 West Africa Ebola outbreak and now volunteers in Uganda at the border of the DRC. “After the 499th patient, they looked at the data and it triggered a stop. One of the four drugs was much better than the others—the REGN-EB3 product. Further analysis revealed that two of the drugs, REGN-EB3 and mAb114, were much more effective than ZMapp and remdesivir.”

After that realization, protocol shifted. To date, over 1,500 people have received experimental drugs. Patients are given either REGN-EB3 or mAb114, depending on availability, but not ZMapp or remdesivir. So far, it appears that up to 94 percent or 89 percent of people can survive Ebola infection if they are treated as soon as possible with REGN-EB3 or mAb114, respectively.

“The miracle of this is that it was possible to conduct a trial in this setting, in the middle of an outbreak complicated by war conflict and an inability to access patients,” Bhadelia says. “It’s a testament to the efforts of the healthcare workers, the DRC Ministry of Health, and all the organizations on the ground…. This will change the practice of Ebola care for everyone.”

Davey says he hopes the positive results will encourage people to bring themselves and their loved ones to the clinic as soon as they fall ill. “People [affected by an Ebola outbreak] have been very scared of going to clinics because there hasn’t been an effective treatment—now that this news is getting out there, I think more people will report to the clinic for treatment soon after exposure,” he says.

“Getting to care early is key,” Bhadelia adds. “People who have a low viral load have a better chance at surviving with treatment. Right now, people are waiting an average of six days to come to the clinic. But by day six, you’re already very sick. That affects our ability to give them the benefits of these experimental drugs.”

An Ebola cure? Not yet, NEIDL researchers say

John Connor, a NEIDL virologist, is encouraged by the news, although he can’t yet tally up just how the reported efficacy numbers were reached.

“I do think we’re not seeing a lot of the data,” he says. “I have additional questions that haven’t been answered about the specifics of how they got to their numbers. What’s the expectation for [giving the drugs] at different times [since infection]?”

He also says that it would be premature to believe that, based on these promising therapeutics, Ebola is a problem that’s been solved. “I don’t think this is a cure—we’re not talking about abolishing the suffering that comes with Ebola infection. These treatments are focused on the Zaire species of Ebola virus, but the Sudan and Bundibugyo strains have also caused outbreaks. I don’t think that [REGN-EB3 or mAb114] would be helpful in those circumstances.”

Bhadelia agrees, calling the breakthrough a treatment, but not a cure. “We’re not sure if the virus clears completely or what symptoms survivors will still have.” After infection, people can still suffer through what’s known as Ebola virus disease syndrome. People’s bodies have been ravaged, she says, and they can have debilitating joint pain, memory issues, neurological issues, chest pains, and/or hearing loss. Horrifyingly, the virus can also remain hidden inside parts of the body like the eyes, central nervous system, and even semen—meaning Ebola can sometimes be sexually transmitted long after someone has survived the initial infection.

“What happens to survivors [treated with REGN-EB3 or mAb114]? Do they have a better chance of not having Ebola virus disease syndrome?” Bhadelia says.

“And,” she adds, “We’re only talking about [Ebola Zaire], which is just one of five different species of Ebola.” Ebola itself, Bhadelia says, is only one branch of a huge family tree of viral hemorrhagic fevers—including Marburg and Lassa—that are affecting this part of Africa. “They all have the ability to ravage communities with outbreaks. We can’t lose sight of the fact that we haven’t won the war, just one battle.”