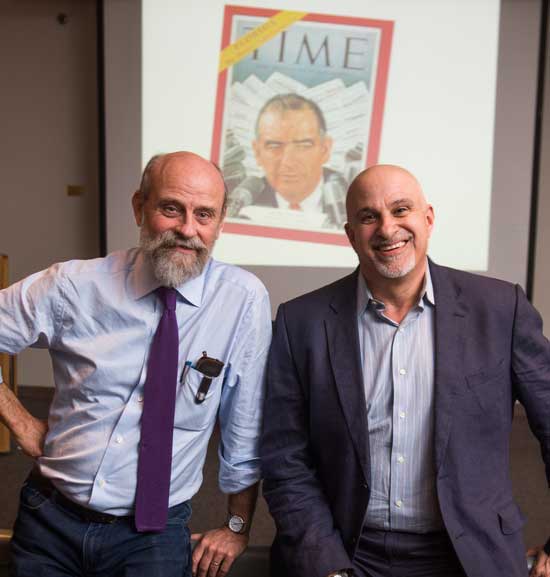 “We both like to perform,” Bruce Schulman, a CAS professor of history (right), says of colleague Chris Daly, a COM professor of journalism, during their weekly colloquy on their joint class on media and politics. Photo by Cydney Scott

Should journalists call out a political leader who lies, misspeaks, and bullies opponents with scurrilous slurs?

If you think that’s a veiled swipe at a certain White House incumbent, you’ve jumped the gun.

The roughly 100 students in the lecture hall have just heard Chris Daly, a College of Communication professor of journalism, talk about uncritical reporting, in the 1950s, of US Senator Joseph McCarthy’s unsubstantiated accusations of communist subversion. Now, Daly is taking questions from colleague Bruce Schulman, a College of Arts & Sciences professor of history.

“If I understood you right,” says Schulman, just a twinge of skepticism in his tone, “you were critical” of uncritical journalism. Given that today’s media bird-dog and condemn President Trump’s false utterances, the William E. Huntington Professor of History continues, is that aggressiveness appropriate?

“That’s a very penetrating question,” Daly says congenially, provoking twitters from the crowd by putting on a screen the New York Times pages-long compilation of “Trump’s Lies.” But superficial, back-and-forth reporting of McCarthy’s charges and his targets’ denials didn’t yield the truth, Daly argues, offering an analogy: “If I say that Professor Schulman doesn’t know anything about baseball, and he says—”

“Actually, I know a little bit about baseball,” the accused replies.

“Is he back to where he was before he was accused? Not really,” Daly triumphantly concludes. “There’s this thing, this air [of suspicion] hanging over him.”

The collegial colloquy between two avid teachers (“we both like to perform,” says Schulman) is a weekly ritual of their joint class meetings, Media & Politics in Modern America (Schulman’s history course) and The Presidency and the Media (Daly’s journalism offering). A goal of their discourse, and the classes generally, is to demonstrate how their respective academic disciplines approach the topic.

But in a bitterly contentious era, there’s a subtler takeaway from the colloquies. “Can we model a discussion between two people who can disagree, often disagree vigorously, but always civilly?” Schulman says in an interview with the teaching duo.

The course syllabus carries an unusual Note on Partisanship, advertising that “all views are welcome” and that “there are no ‘politically correct’ answers or viewpoints in this class,” only an expectation that comments and work “be based on fact, rather than political loyalties or sentiment.” It’s a hangover from when they first taught the course in fall 2016 and was intended to telegraph scholarly neutrality in the presidential race then underway.

“Of course,” adds Schulman, “we had no idea what was coming,” at which Daly emits an incredulous whistle.

What came, of course, was a Trump victory followed by a rhetorical war on the press that has seen the president attacking journalists as “enemies of the people” (a phrase borrowed from  Nazi Germany and Stalinist Russia against Jews and dissidents) and peddlers of “fake news.”

Critics see that rhetoric as a prong in an assault on republican norms. But this is academia, and Daly says the class, part of BU’s Hub, lowers the political thermostat by mixing current controversies with historical perspective, reaching back not just to the 1950s but to the 1890s.

Not that Schulman and Daly duck the contemporary Trump-press slugfest. The latter has lectured on the history of the enemies-of-the-people phrase, and students say topicality is one thing drawing them to the class.

“Today, I don’t think you would see people like McCarthy getting as much of a platform from journalists,” says Hannah Schoenbaum (COM’21), noting that journalists dismiss climate change deniers and Trump’s falsehoods. “We’re starting to actually see a shift in language to using the word ‘lie,’” she says, ginning up some Americans’ antipathy toward journalists.

Lauren Kelmar (COM’21) says she has learned about parallels between Trump’s twitchy Twitter finger and Franklin Roosevelt’s radio fireside chats—but sees the comparison only to a point, as “FDR was pretty smooth.”

One class theme is that journalists sometimes have a better grasp of their own times than the professional historians who study those times after the fact. The course ponders a famous example, Schulman says: newspaper editor James Callender’s “scurrilous attack on Thomas Jefferson for having a slave mistress—generation after generation of historians not only did not credit that, but went to lengths to debunk it. And it turned out that Callender was a lot more accurate.”

He and Daly teamed to co-teach because of overlapping interests. “I’m sort of a frustrated, never-made-it journalist,” Schulman confesses, “and Chris started off as a historian.” Daly, a former Associated Press and Washington Post reporter, earned a master’s in history at the University of North Carolina and coauthored Like a Family (University of North Carolina Press, 2000), a history of southern industrialization.

Appropriately, Daly’s lecture on the line between reporting and editorializing included a bit of ad-libbed commentary. When his talk was punctured by chants outside from BU janitors protesting for better health benefits, the professor, recalling his high school days as a custodian, interjected, “Holy sh–. As a former janitor, I’ve got to say, I’m with ’em.”

Trump and the Press: We’ve Been Here Before

Trump and the Press: We’ve Been Here Before
One Class, One Day
0
share this