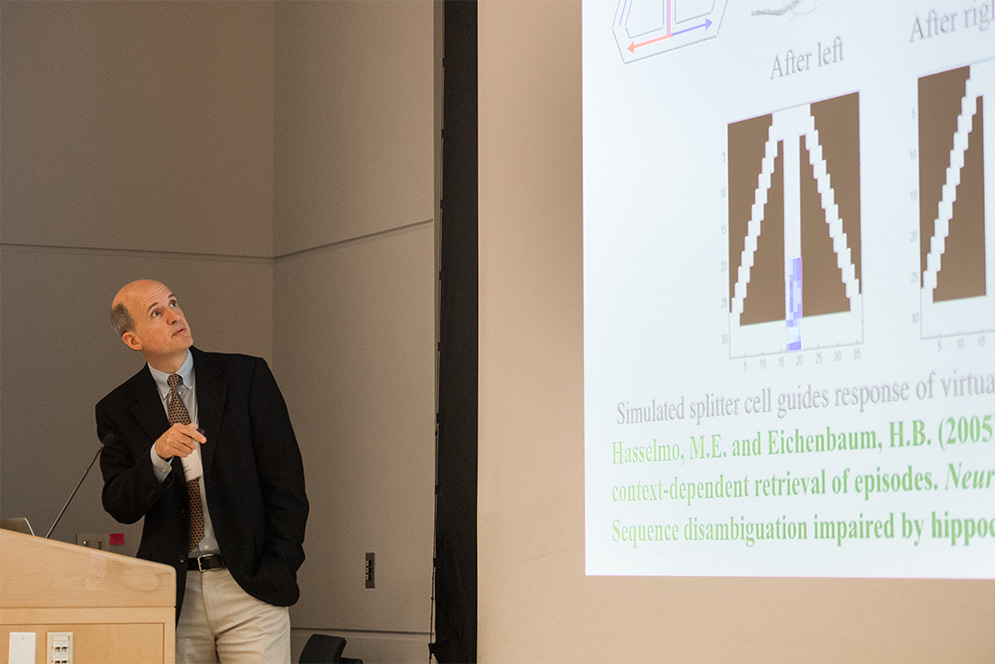 Michael Hasselmo, a BU CAS professor of psychological and brain sciences and director of the Center for Systems Neuroscience, remembered former colleague Howard Eichenbaum as a scientist and leader at a symposium on March 23, 2018. “He had a major influence at Boston University. It’s a legacy that’s going to continue.” Photo by Cydney Scott

Neuroscientists from across the United States and Europe gathered on March 23, 2018, at Boston University for a daylong academic retrospective to celebrate the work and scientific legacy of the late Howard Eichenbaum, a William Fairfield Warren Distinguished Professor and a College of Arts & Sciences professor of psychological and brain sciences. Internationally known for his research on the mechanisms of memory, Eichenbaum, who was the director of BU’s Center for Memory and Brain and the Laboratory of Cognitive Neurobiology, died unexpectedly last July following spinal surgery.

Speakers, many of whom had studied under Eichenbaum, discussed his wide-reaching contributions to neuroscience, especially his work elucidating the role of the hippocampus—a small, seahorse-shaped structure on the floor of the brain—in storing and retrieving memories. During his 40-year career, he authored or coauthored about 200 peer-reviewed papers and more than 100 related reviews and authored or edited eight books. He was also editor in chief of the journal Hippocampus.

One of Eichenbaum’s major scientific contributions was his description of the hippocampus as a dynamic “memory space” that communicates with other brain regions to store and recall memories. This expanded beyond the previous understanding of the hippocampus, which saw the region as a “cognitive map” that simply stored spatial representations of the environment.

Eichenbaum used experiments with rats—on treadmills, in mazes, sniffing out treats—to understand how the hippocampus works, and to prove, specifically, that it stores and uses information about both time and space. Neal Cohen, a University of Illinois at Urbana-Champaign professor of psychology, who spoke at the conference, said that “Howard was an utter master in asking questions, and getting answers, from rodents.”

Other speakers noted Eichenbaum’s wider scientific impact, like his contribution to the case of the famous amnesia patient H.M.; his research on “time cells,” individual neurons that fire at certain times during behavioral tasks; and his role in deepening our understanding of episodic memory.

What emerged through the day, however, was the sense of Eichenbaum not only as a scientist, but as a man of remarkable energy who admired both Aristotle and the Red Sox, liked bucking the conventional wisdom, exhibited a curious fondness for the comic sans font, and—most important—relished his role as a teacher and mentor.

“I think he really sparked this interest in a lot of us, and gave us the opportunity to do interesting research, even at a young age,” recalled Elizabeth Buffalo, a University of Washington associate professor of physiology and biophysics, who described taking an introductory class from Eichenbaum as a Wellesley College freshman. And, as she built her career in neuroscience, “I always felt like Howard had my back,” she said. “I know he wrote many recommendations for advancement and tenure for me, even though I was never officially one of his graduate students.

“So many other people felt that way,” she added. “We always felt that we had Howard as a champion.”

In addition, Hasselmo said, Eichenbaum played a major leadership role at BU, bringing in millions of dollars in federal funding, mentoring many students and postdoctoral fellows, and playing a large role in BU’s decision to build the Rajen Kilachand Center for Integrated Life Sciences & Engineering, which opened this past fall, shortly after his death.

“He had a major influence at Boston University,” says Hasselmo. “It’s a legacy that’s going to continue.”

At the close of the retrospective, BU President Robert A. Brown dedicated the Kilachand Center’s first-floor colloquium room in Eichenbaum’s honor, saluting a “trailblazing researcher of memory and brain.”

“It’s clear Howard was acknowledged as the intellectual leader and founder of neuroscience on our campus. His death was a great loss to our campus and to science,” said Brown, and the dedication “acknowledges his incredible contributions as a teacher-researcher at Boston University.”

“Having Howard’s name here is so important. It’s a reminder of Howard and how important he was in getting us to where we are,” said Gloria Waters, vice president and associate provost for research. “He put BU neuroscience on the map.”