Howard Eichenbaum, the Principal Investigator for Laboratory of Cognitive Neurobiology, passed away on July 21st, 2017 at age 69.

CRAM 2018 Academic Retrospective: Memory researchers gathered at Boston University to celebrate Howard Eichenbaum’s academic work and to discuss how his career not only affect them personally but also Howard’s lasting impact on the theory of memory.

Howard’s close collaborators and a few of his colleagues in the Boston University Community have written pieces about what Howard meant to them.

Our lab remains operational and committed to the mission Howard has given us:

The research program of this laboratory is focused on four closely related projects that seek to understand the brain circuitry that supports memory. This research is guided by the hypothesis that our ability to remember specific experiences relies on an organization of memories about objects and events in the context in which they occurred. We believe that associations between objects and context is accomplished through the circuitry of the medial temporal lobe, in which parallel pathways represent information about objects and about context, and these streams of information converge within the hippocampus. A project central to this goal seeks to characterize how neurons in key components of the medial temporal lobe encode these different types of information and how components of this brain system interact with one another. Another project explores how the hippocampus is initially critical to associations between objects and context but eventually, these associations consolidate in cortical areas with which the hippocampus is connected. Another project explores how the prefrontal cortex controls the retrieval of memories as they bear on ongoing cognitive processes. And yet another project explores how hippocampal networks represent objects in the spatial and temporalcontext in which they occur. Together, these projects will provide new insights into how memories are organized within the medial temporal lobe memory system and how memories are retrieved when we recall our daily experiences. 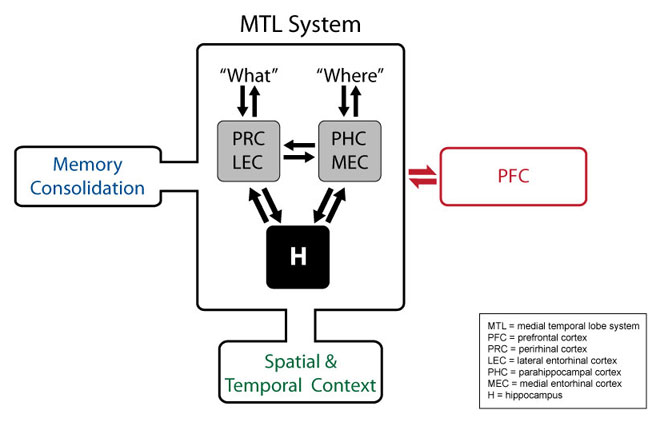