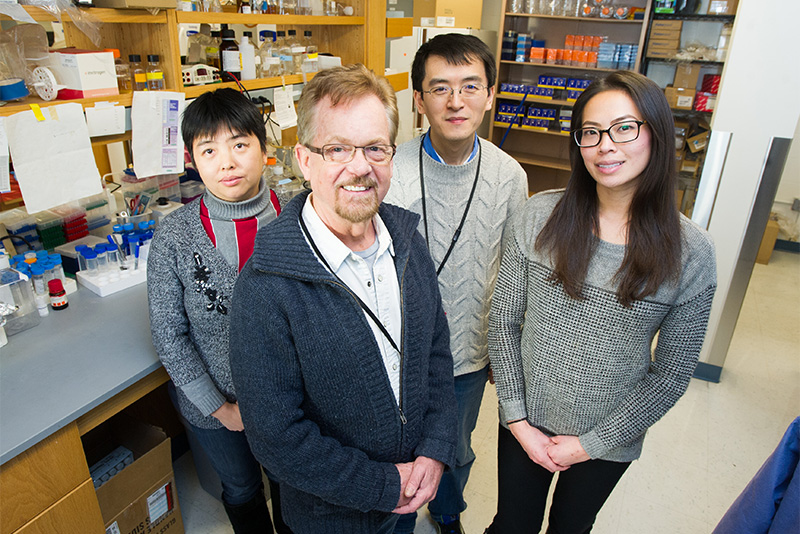 We’re all familiar with white fat—a bit too familiar, perhaps. White fat is the stuff bulging around our waists and thighs, the result of too little exercise and too much fast food. Today, with more than one-third of American adults and 17 percent of children obese, according to the Centers for Disease Control and Prevention, scientists are scrambling for new ways to treat obesity. One hope stems from a surprising place: brown fat, which is, in many ways, the alter ego of white.

Brown fat burns glucose and lipids to create heat, and it works in other ways to counter obesity, inflammation, and their ill effects. For many years, scientists thought that brown fat existed only in small mammals and newborn human babies, who need help staying warm. Then, in 2009, scientists found brown fat in adult humans, and suddenly it became one of the hottest topics in metabolism research.

Scientists have since found several ways to coax the growth of brown or “brown-like” fat in mice. The burning questions today: What is the best way to encourage the growth of brown fat or, even better, turn bad white fat into brown? And is there a way to turn this basic science into a drug for humans? If so, it would be the biological equivalent of turning lead to gold.

Now, a team of Boston University biochemists, led by Stephen Farmer, professor of biochemistry at the BU School of Medicine, and postdoctoral fellow Hong Wang, offers the latest word on brown fat alchemy. In work published on December 13, 2016, in Cell Metabolism, the researchers show that treating mice with the experimental chemotherapy drug Roscovitine (also known as Seliciclib or CYC202) produces patches of brown fat within the white, simultaneously increasing the mice’s energy expenditure and improving their metabolism. The group also developed a novel way to sort brown fat cells from white and sequence the cells’ genes. Their work uncovered three genetically distinct forms of brown fat, which they are calling “classic brown,” “beige,” and “brite,” all of which seem to arise from different pathways. The work is significant because it suggests multiple routes and methods through which brown fat might be encouraged to grow.

“This is a provocative study, which really illustrates that brown and beige fat are druggable targets in a meaningful physiological way,” says Bruce Spiegelman, professor of cancer biology at Harvard Medical School and a leading authority on fat cell regulation and differentiation. “Whether or not Roscovitine should be used is still an open question; it’s a toxic drug—but this study shows that drugs can be used.”

White fat looks white because it’s full of molecules called lipids, usually condensed into one large blob, that the body uses for long-term energy storage. Brown fat has lipids too, but they are broken into many droplets that the cell is constantly burning as fuel. Brown fat looks brown because it is packed with mitochondria, the bean-shaped powerhouses that make ATP, often called the energy currency of our cells. The mitochondria found in brown fat are a quirky lot, containing a special molecule called “uncoupling protein,” which allows the mitochondria to slack off on some of their ATP-making duties in favor of generating heat. The presence of this uncoupling protein, along with extra mitochondria and many lipid droplets, is the hallmark of brown fat.

The scientists already knew of two ways to induce the growth of brown fat cells in mice: with a diabetes drug called Avandia or by exposing them to cold—or a drug that mimics the body’s response to cold. In humans, Avandia makes white fat act healthier—producing more beneficial hormones and reducing inflammation. In mice, scientists have also found that the drug encourages patches of brown fat to grow within the white, a process called “beigeing.” But there are side effects: Avandia can cause, paradoxically, weight gain and heart problems in some patients.

“The ideal thing would be to have a drug that does all the good things Avandia does, without the side effects,” says Farmer, senior author on the Cell Metabolism study. “A lot of research now is focusing on what exactly the ‘beigeing’ fat is, how it functions, and how we can activate it.”

For their current research, Farmer’s group raised two groups of mice, feeding them either a normal diet or a high-fat, high-calorie diet to induce obesity. The mice were further subdivided into groups receiving Avandia, nothing, a drug called CL-316,243 that mimics the body’s response to cold, or the experimental chemotherapy drug Roscovitine. After eight weeks, they found that only Roscovitine produced positive effects like lower blood glucose, less weight gain, and increased beigeing of white fat, with no negative effects like fatty liver deposits.

Next came the genetic analysis. The group used special transgenic mice for the experiment, in which their white fat cells fluoresced red and brown fat cells fluoresced green. This fat cell color-coding allowed the team to separate the brown and white cells and then analyze their genes. The researchers found four very different genetic patterns: one for white fat cells, one for classic brown cells, one for cold-induced brown or “beige” cells, and one for Avandia- or Roscovitine-induced brown or “brite” cells. It’s not yet clear if the cells have truly distinct origins or simply have different gene programs activated by different drugs. The patterns included a handful of genes not formerly known to be involved with fat.

It’s too early to say whether this work will lead to new treatments for obesity in humans. But Roscovitine, already in phase 2 clinical trials for certain cancers, appears to offer some hope. “This drug has great potential,” says Farmer.

All Fat Is Not Created Equal

There are 4 comments on All Fat Is Not Created Equal