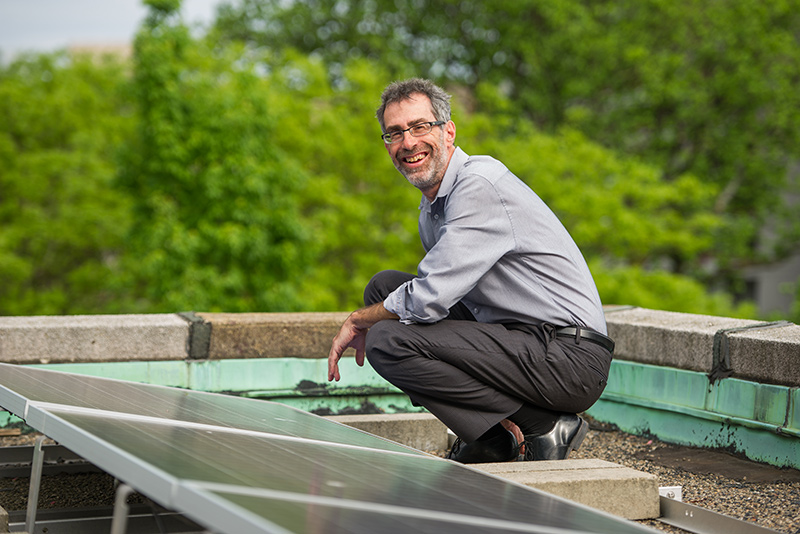 Hoping to reduce their greenhouse emissions, Kelley Hippler and her husband, Tom, installed solar panels on the roof of their Colonial-style home in suburban Sharon in summer 2015. “We had, like a lot of folks, become more aware of global warming and we wanted to look into forms of sustainable energy,” Kelley says.

The couple took advantage of a federal tax credit that lowered the cost of installing their system from $45,000 to $31,500. A state tax credit saved them another $1,000. The solar panels, also known as photovoltaics (PV) systems, have cut the electric bill for their 3,500-square-foot home from an average of $200 a month to basically zero, says Kelley. With the exception of the coldest winter months, they also send enough power back to their electric company most months to earn a small credit on top of the $200 savings. The couple has two meters, one showing how much electricity they draw from their utility company and one showing how much electricity they send back to it. Between September 2015 and April 2016, Kelley says, they earned $100 in credits.

It’s not surprising that the Hipplers are saving a considerable amount of money with their solar panels. What is remarkable is that, as revealed in a new study by Robert Kaufmann, a professor of earth and environment at Boston University’s College of Arts & Sciences, their solar panels, along with those of about 40,000 other Massachusetts households and community groups, are reducing electricity prices for all of the approximately three million electricity ratepayers in the state, even those with no solar panels.

“Until now, people have focused on how much was being saved by those who owned PV,” says Kaufmann. “What this analysis quantified was that it actually generates savings for everybody.”

Kaufmann’s study, which was co-authored by Devina Vaid, who helped with the research while she was an undergraduate at Vassar College, was published in the June 2016 edition of Energy Policy. It looked at the ways that electricity prices and consumption, power plant efficiency, and PV capacity utilization are related to one another on an hourly basis. “We’re the first ones to really calculate system-wide savings on an hourly basis,” Kaufmann says. He notes in his paper that using an hourly average for electricity prices, rather than a daily average—as many past studies have done—is a more accurate way to quantify how PV systems affect electricity prices, because such prices fluctuate greatly throughout the day.

“Until now people have focused on how much was being saved by those who owned PV. What this analysis quantified was that it actually generates savings for everybody.” Robert Kaufmann

There are about one million solar installments—private rooftop, community, and commercial—in the United States, and they account for about one percent of the electricity produced in this country. With the cost of PV systems continuing to fall, that number is expected to double in the next two years, according to the Solar Energy Industries Association (SEIA), a nonprofit trade association. In 1998, the average price of a residential system was $12 per watt; in 2014, it was $4. (The number of watts on a rooftop system varies; the Hipplers’ system is 8,160 watts.) The SEIA ranks Massachusetts sixth among states for solar power generation, as measured by installed solar capacity; the state currently has about 1,020 installed megawatts (MW), enough to power 163,000 homes. Massachusetts Governor Charlie Baker has set a goal of 1,600 installed megawatts for the state by 2020.

Solar power systems save money for all ratepayers because they generate most of their energy during the hot summer months, says Kaufmann, when “everyone has their air conditioners running,” and demand for electricity is at its highest in Massachusetts. Utility companies, which obtain electricity from a variety of sources, must constantly balance customers’ supply and demand. As demand goes up—say, during the morning hours after people wake up and begin turning on their devices—the companies buy electricity from more and more power plants. They start with plants that can produce electricity most cheaply and move up to more costly plants from there. If demand gets high enough, Kaufmann says, “they have to turn to plants that do not operate very often per year because they’re relatively small, relatively inefficient, and their fuel costs are high” and “that really drives up prices.”

These savings can be evaluated by comparing them to the subsidies that ratepayers make to owners of PV systems. One subsidy is termed a solar renewable energy credit (SREC). In order to receive SRECs, PV system homeowners like the Hipplers opened an account with the New England Power Pool Generation Information System (NEPOOL-GIS), an electronic registry run by APX, a California-based energy exchange company. The NEPOOL-GIS tracks the electricity generated by the PV system and issues an SREC for every 1,000 kilowatts (kW) it makes. An 8 kW system like the Hipplers’ should produce nine to ten SRECs a year, according to estimates from the Massachusetts Clean Energy Center, a government agency.

Homeowners can sell their SRECs to utility companies via online auction sites like SRECTrade.com, where the price is set by market forces of supply and demand, or at a special state auction at the end of the year. They also can use a broker/aggregator who pools SRECS from many PV system owners and sells them in bulk to utilities. In several states, including Massachusetts, utility companies have an incentive to buy SRECs because state law requires utilities to generate a percentage of their electricity from solar energy and other renewable energy sources. In Massachusetts, that number is 11 percent; it will increase by 1 percent each year until it reaches 15 percent in 2020.

Utilities purchase SRECs with money collected from all ratepayers in the form of a charge for renewables. Kaufmann’s study finds that this charge is about the same as the price reductions generated by PV systems. Each megawatt of electricity generated by PV systems in 2012 saved ratepayers about $303. This was about the same as the price for an SREC, $261 per megawatt. (Kaufmann used the 2014 SREC price). “Right now, it’s basically a wash,” Kaufmann says. “The savings generated by PVs basically cover the cost of the SREC, so in reality, consumers are paying nothing for the SRECs.”

Kaufmann’s study also notes that while the price savings that PV systems generate are about the same as the amount that consumers pay to subsidize SRECs, that dynamic will eventually change to the benefit of ratepayers. That’s because once the SREC program ends, sometime between 2020 and 2024, the savings that PV systems generate for all ratepayers will continue throughout the lifetime of each system, which averages 30 years. In other words, the Hipplers may receive SRECs until 2024, but their system will continue to contribute electricity to the grid—especially replacing the electricity from less-efficient, more expensive power during the high-use summer months—until about 2045.

“This study is fantastic in pointing out just one of the many benefits of solar energy and how it brings real economic value to all ratepayers,” says Nathan Phelps, program manager of distributed generation regulatory policy for the nonprofit Vote Solar, a California-based non-profit grassroots organization that advocates for solar energy and has offices in Boston. “The economic calculations, as far as total costs and total benefits, can be difficult for many entities, especially state entities, to calculate, because they don’t necessarily have the time or expertise.”

Peter Fox-Penner, director of BU’s Institute for Sustainable Energy, a professor of the practice at the BU Questrom School of Business, and a longtime energy consultant, notes that the customer savings found in the report are even higher for larger-scale community and utility-scale solar plants, without incurring any distribution rate impacts. He points out that a 2015 consulting study he conducted for a large solar firm and the utilities found that large-scale solar plants produced solar electricity at one-half the cost of identical rooftop systems and produced twice the carbon savings per dollar spent on solar.

“This study is fantastic in pointing out just one of the many benefits of solar energy and how it brings real economic value to all ratepayers.” Nathan Phelps

The Hipplers also receive a hidden subsidy in the form of net metering, a billing process in which PV system owners get a credit when their system is producing more electricity than they use—during daylight hours, for instance. This credit reduces their bill when their system is not producing much electricity, such as at night. At the end of the month, the bill is determined by the balance between the amount of electricity generated by PVs and the amount of electricity consumed by the homeowner. Because the Hipplers’ PV system produces more electricity than they consume, their bill is zero and they have earned a $100 credit.

While it seems fair—since people like the Hipplers produced more energy than they consumed—Fox-Penner notes that these consumers did not pay to install and maintain the wires that allow them to transmit electricity generated by their PV system or to obtain electricity when they consume more electricity than generated by their PV system. And without payments from the Hipplers, transmission and distribution charges on bills for those without PV systems rise.

Kaufmann’s study also shows that PV systems lower greenhouse gas emissions in Massachusetts slightly more than previously thought, a benefit that is also related to solar power’s summertime bonanza. Here’s how that works: Kaufmann says natural gas–powered utility plants are most efficient during the winter months because of the greater difference in temperature between the natural gas fire in the plant furnace and the outside air. The flow of hot air moving from the fire toward the colder outside air creates the power. That power spins the plants’ turbine blades, which generate electricity; the greater the temperature difference, the faster the turbines spin.

But when summer temperatures rise, the flow of hot air weakens. This slows the rotation of the turbine blades, so it takes more fuel to generate each unit of electricity. This results in greater greenhouse gas emissions, but fortunately that is also when solar systems generate the greatest amount of power. Utility companies can make use of solar power and rely less on natural gas plants.

Using a statistical analysis that took into account the fact that PV power generates the greatest amount of electricity when the state’s natural gas power plants are least efficient, Kaufmann’s study estimates that PV systems lower carbon dioxide emissions a little bit more, about 0.3 percent, than what other similar studies have estimated. This is because the earlier studies—while taking into account that PV systems lower emissions when they replace electricity that would otherwise be generated by natural gas plants—did not take into account additional savings from this inverse relationship between PV systems’ summertime energy generation and natural gas power plants’ summertime inefficiency.

Kelley Hippler says she likes the idea that the solar power system on her roof is lowering carbon emissions. She enjoys visiting a website managed by her solar installation company that shows the amount of carbon in pounds her solar panels have kept out of the atmosphere each month. It also indicates the equivalent of how many trees it would take to absorb that carbon. During a recent month, for instance, the Hipplers offset 1,400 pounds of carbon that would have otherwise ended up in the atmosphere; her installation company says that is the equivalent work of 16 trees.

“We do get satisfaction out of looking at that and seeing that we’ve helped (lower greenhouse gas emissions) each month,” Kelley says. As for helping her neighbors to lower their bills, she says, “I hadn’t thought about that, but it’s a great benefit as well.”

There is 1 comment on Solar Power Saves Everyone Money