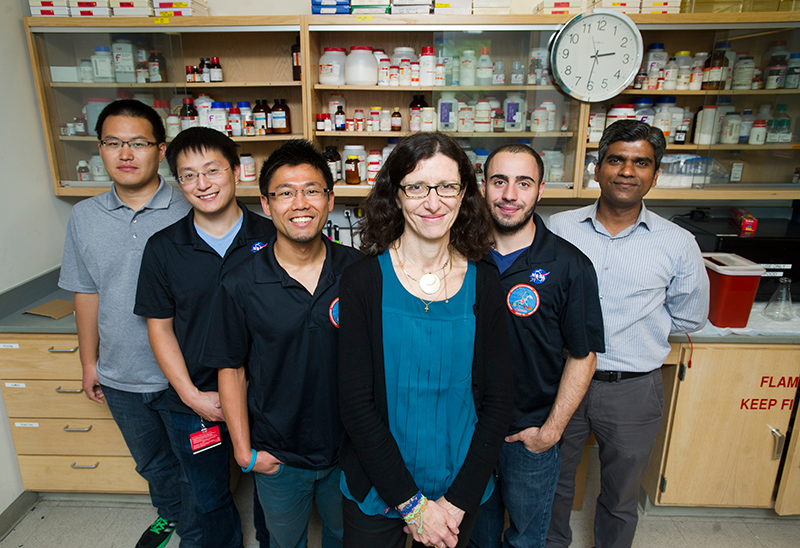 In May 2015, the SpaceX Dragon spacecraft splashed down in the Pacific, the last stage of its sixth mission to the International Space Station. Inside, it carried a briefcase-sized metallic container of bone cells that belong to Boston University researcher Paola Divieti Pajevic. The cells, which have experienced the extremely low levels of gravity on the space station, could contain clues about better ways to treat osteoporosis and other conditions that cause bone loss, and also ways to support astronauts on longer missions, such as a trip to Mars.

“Everything has worked perfectly well so far,” says Divieti Pajevic, an associate professor of molecular and cell biology at the Boston University Henry M. Goldman School of Dental Medicine. “Knock wood, we should have plenty of material to study.”

The experiment, which lasted seven days in space, was nearly five years in the making, so she has good reason to invoke a little supportive superstition. One reason for the long lead time is that the cells, called osteocytes, are challenging to study. They live deep inside hard bone, so they are difficult to isolate in a cultured cell line. Also, they turn mechanical signals—physical forces, such as those caused by the weight-bearing exercises doctors recommend to stave off bone loss, and the ever-present force of gravity—into cellular signals that build strong bones. Prodding them in a way that strengthens or weakens those forces isn’t so easy. You can’t exactly send a petri dish off to Gold’s Gym for a workout.

But you can send them into space.

By doing so, Divieti Pajevic hopes to gain a better understanding of the basic biology of osteocytes. “Ultimately, we hope to identify novel genes that could someday lead to new therapeutics,” she says.

In 2009, the National Institutes of Health (NIH) was looking for promising space research projects, so Divieti Pajevic, then at Harvard University, proposed sending up osteocytes. In 2014, she moved to the BU dental school. Teeth and bones have a lot in common biologically and both respond to mechanical forces, she says, so it’s a great location for her lab.

Osteocytes are of particular interest to NASA since many astronauts have lost bone mass, at a rate of about one percent per month, during space voyages. While it is clear that microgravity causes bone loss, exactly how it affects bone cells at a molecular level isn’t yet understood. The NIH’s National Institute of Arthritis and Musculoskeletal and Skin Diseases funded the project, called Osteo-4, as did the Center for the Advancement of Science in Space and NASA’s Kennedy Space Center.

The team’s first step was to create an osteocyte cell line suitable for a space journey. Bone researchers had so far developed only two models of cultured osteocyte cells, both derived from mice, but they fell short. For instance, neither reliably produced sclerostin, a protein recently discovered to slow bone formation. Today, several new drugs are in development to block sclerostin in osteocytes to treat osteoporosis.

Divieti Pajevic couldn’t very well send cells into space that lacked one of the most interesting new therapeutic leads for bone loss. Her new cell line of osteocytes, also derived from mice, produces sclerostin and several other factors related to bone growth. “Now there are three cell lines available for the scientific community, all slightly different,” says Divieti Pajevic. “And there is still room for more.”

In work published in 2015 in the Journal of Biological Chemistry, she validated the cell model by testing it in a NASA-developed microgravity simulator. The simulator, which is about the size of a soda can, slowly spins the cells to put them into a perpetual state of free fall, essentially counterbalancing the force of gravity. Time in simulated microgravity causes the cells to produce sclerostin, confirming that the cell model does, in fact, respond to reduced gravity. “It is very important to do this same experiment in space so we can have real microgravity, the real unloading of forces on these cells,” Divieti Pajevic says.

While development of the new cell model was a giant leap, work was only just beginning. It took another two and a half years to be flight ready.

The Osteo-4 team first chose a 3D structure made of polystyrene foam for growing their osteocytes. Cell growth in this scaffold mimics growth inside of bone but also allows experimental analysis later.

To develop trays to hold the bioreactors the cells would live in during the journey, the team worked with CALM Technologies, in Canada, which designs equipment for space and biomedical projects and had sent other cells into space. They also collaborated with Draper Laboratory, an independent lab in Cambridge, Mass., with a long history of aeronautics and astronautics research, to simulate the Dragon launch to make sure that the few minutes of intense vibration during takeoff wouldn’t alter the osteocytes and ruin the experiment.

One of the biggest challenges, however, was getting all of the air bubbles out of the bioreactors, because bubbles can scramble cellular signals. They have settled on a process that involves tapping the bioreactor tubes and vials with a rubber mallet to coax the bubbles to the top, and then sucking them out with a syringe. “We have become experts at de-bubbling,” says Divieti Pajevic.

Up in space, Italian European Space Agency astronaut Samantha Cristoforetti carried out the experiment. The Osteo-4 payload contained three trays of osteocyte-filled bioreactors, each connected to a variety of fluids, including liquid nutrients to keep the cells alive.

On three scheduled occasions over the course of seven days, Cristoforetti moved a tray-worth of bioreactors into cold storage. She did the work inside a glove box in case of a spill. In an Earth-bound lab, dripped chemicals just puddle on the table, but in space they would float around the ship and could interfere with equipment or become a health hazard.

Freezing the cells halts cellular functions and preserves a snapshot of the genetic activity. Divieti Pajevic will measure that activity through gene profiling. She will look at changes in levels of RNA, which is produced when a gene is turned on and provides the instructions for making molecular machinery, such as bone-building or bone-loss proteins. By freezing the cells after three different intervals of microgravity exposure—approximately two, four, and seven days—Divieti Pajevic will be able to see which gene expression levels change with extended exposure. “Our goal is to find novel genes that change their expression levels in microgravity,” she says.

In summer 2015, when analysis is expected to begin, Divieti Pajevic expects to see a rise in production of sclerostin. But, by looking across the whole genome for changes after time in microgravity, she also hopes to see much more.