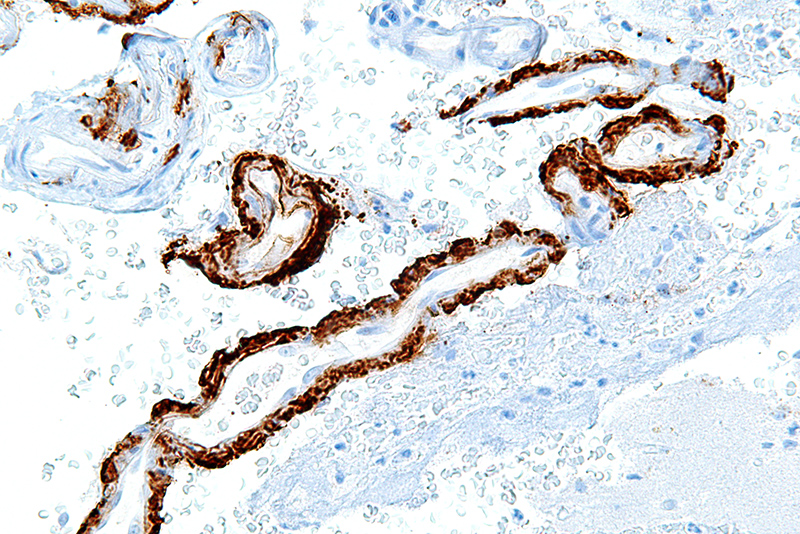 Amyloid beta protein—“Abeta” for short. In Alzheimer’s disease, the sticky strands clump into plaques that kill neurons. MED scientists have discovered a compound that may stop Abeta formation. Photo by Nephron via Wikimedia Commons

In the war against Alzheimer’s disease, one of the big villains is a protein called amyloid beta—“Abeta,” for short. In a diseased brain, sticky strands of the protein clump into plaques that kill nerve cells and choke the gaps between them. Under a microscope the plaques look sinister, even to the untrained eye—scattershot black blotches, splattered across healthy tissue.

Scientists, knowing the damage Abeta can cause, have searched for therapies that clear the protein from the brains of Alzheimer’s patients. So far, all clinical trials of this approach have failed. Though two trials are still ongoing, for now Alzheimer’s remains a disease with no prevention or cure.

Now Carmela Abraham, Boston University professor of biochemistry and medicine, and a team of scientists from the BU School of Medicine (MED) have discovered a new way to attack Abeta in the lab, with a compound that blocks its formation. They presented an unpublished preview of their discovery at the Society for Neuroscience annual meeting on October 19, 2015. This preliminary work, funded by the Alzheimer’s Association and the Cure Alzheimer’s Fund, may eventually lead to a novel treatment for this deadly disease.

“Alzheimer’s is now the number six killer of adults in the United States. Deaths from breast cancer and heart disease keep dropping, but Alzheimer’s increases every year,” says Abraham. “Caring for Alzheimer’s patients costs over $200 billion per year. The estimate for 2050 is $1.1 trillion, which means it will completely break the health care system. We have to find a drug.”

The brain creates Abeta with enzymes that chop a larger protein, called the amyloid precursor protein (APP), into smaller bits. Sometimes, for reasons scientists don’t quite understand, two APP proteins join together in a process called dimerization, which ultimately leads to increased Abeta. Abraham wondered: if scientists could stop dimerization, would that stop Abeta in its tracks? She decided to try.

Working with Harvard’s Laboratory for Drug Discovery in Neurodegeneration, Abraham’s team screened 77,000 molecules that they thought might affect APP dimerization. They focused on small molecules because large ones don’t easily cross the blood–brain barrier. “If you want to treat brain disease, you need small molecules,” says Abraham. “If you use large molecules like antibodies, only a very small percentage get into the brain, and they can have huge effects on the rest of the body.”

The drug screen turned up one significant hit. Abraham showed the molecule to her colleague John Porco, professor of chemistry and director of BU’s Center for Molecular Discovery. Porco identified the molecule almost immediately: it was a kinase inhibitor. These block the action of enzymes called kinases, which are common in many cellular processes.

“This was the big eureka moment,” says Abraham. “Once we knew what the molecule was doing, we could search to see what kinase it inhibits and better understand the mechanism.” Further work found that the molecule was acting on a kinase in a larger cell-signaling complex. Abraham hopes that more research will find the enzyme that acts directly on APP. “That would be the target,” she says.

Her team, which includes postdoctoral fellow Ella Zeldich, research assistant professor CiDi Chen, and assistant professor of chemistry Lauren Brown, is now looking for similar molecules that may work even better, and for other molecules in the pathway that may also become drug targets. The ultimate goal, says Abraham, though still years away, is an effective drug where none now exists.

“Right now there is nothing,” says Abraham. “We must find something new.”

There are 3 comments on New Research on Alzheimer’s