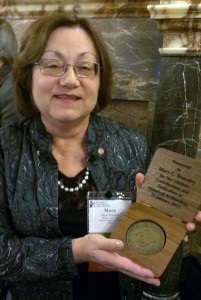 Established in 1981, the J.C. Harrington Award is named in honor of Jean Carl Harrington (1901-1998), one of the pioneers of historical archaeology in North America. The award, which consists of an inscribed metal, is presented for a lifetime of contributions to the discipline centered on scholarship. No more than one Harrington Medal is presented each year. It is considered Historical Archaeology’s highest honor. This year Professor Mary C. Beaudry received the award for her contributions to historical archaeology including her field research in North American, the United Kingdom, and the Caribbean, as well as her innovative and interdisciplinary work on material culture.