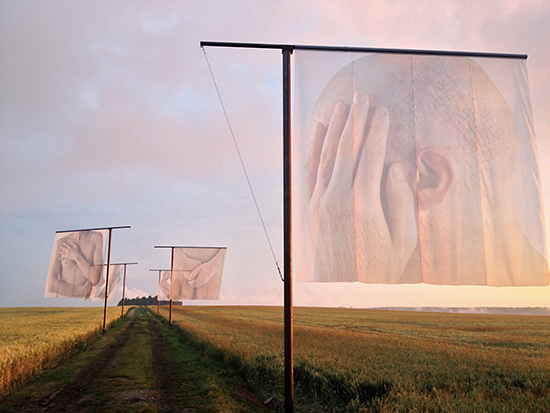 The South African artist Paul Emmanuel employs various media to reveal layered visions concerned with his identity living in the post-apartheid nation. Over the last decade, Emmanuel has conceived and implemented the ongoing Lost Men project, a series of site-sensitive elegiac counter-memorials installed, to date, in public spaces in South Africa, Mozambique, and France. Paul Emmanuel: Remnants is the artist’s first solo exhibition in Boston and features artworks related to the The Lost Men France, which was installed adjacent to the Thiepval Memorial to the Missing of the Somme in France during the summer of 2014. The Lost Men France, the third in the Lost Men series, comprises five large silk banners depicting images of the artist’s body bearing names of French, German, South African, and Allied servicemen impressed into his skin, without reference to rank, nationality, or ethnicity. Paul Emmanuel: Remnants underscores concepts of loss, memory, and processes of memorialization in an evocative installation centered around the literal “remnants” of the The Lost Men France banners, torn and battered by the summer winds of the Somme.

The banners are complemented by a series of ethereal drawings and prints as well as two video works.  The short documentary Remembering an Anti-memorial: Making The Lost Men France provides context and background for The Lost Men France and depicts the intense physical process that Emmanuel subjected himself to in the making of the Lost Men banners. The visually striking high-definition video Remember-Dismember further interrogates constructions of male identity through a progression of alternating closely-cropped vignettes of the artist’s body fully exposed or clothed in historic and contemporary military regalia and formal corporate attire.

Born in 1969 in Kabwe, Zambia, Emmanuel graduated from the University of the Witwatersrand, Johannesburg, in 1993. He currently lives and works in Johannesburg, South Africa.

Emmanuel has exhibited his work in South Africa and abroad. In 2008 his touring solo museum exhibition, Transitions, premiered at The Apartheid Museum, Johannesburg, featuring his critically acclaimed short, non-narrative film 3SAI: A Rite of Passage. The film won the 2009 jury prize at Edinburgh’s 4th Africa-In-Motion International Film Festival, UK, and the 2010 Best Experimental Film Award on the 5th Sardinia International Film Festival, Italy. Transitions debuted its 2010 international tour at the Smithsonian National Museum of African Art, Washington, D.C. In 2004, Phase 1 of his series of counter-memorials, The Lost Men, was launched at the Grahamstown National Arts Festival in Grahamstown, South Africa. In 2007, Phase 2 of this project took place in Maputo, Mozambique. In July 2014 The Lost Men France was installed adjacent to the Thiepval Memorial to the Missing of the Somme, Northern France.