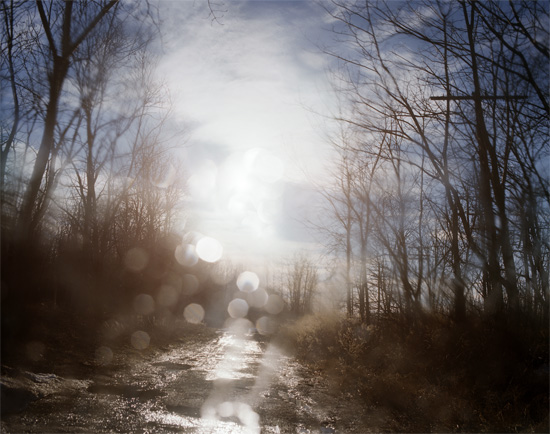 The Boston University Art Gallery is pleased to present Todd Hido: Excerpts from Silver Meadows, organized by the Transformer Station in Cleveland, Ohio.  The exhibition features over 100 of the internationally renowned photographer’s most recent iteration of work. Hido’s photographs are cinematic in scope, and offer a darkly dramatic glimpse into a world that reflects both the alienation and dislocation of suburban America and the inspiration of noir film and literature. A major new monograph published by Nazraeli Press accompanies the exhibition.

Named after the faded Midwestern suburb where Hido (a Kent, Ohio native) grew up, Excerpts from Silver Meadows represents the artist’s metaphorical reckoning with his own past. Boston University’s presentation includes an installation of childhood snapshots, newspaper clippings and other ephemera that served as inspiration for the series, further revealing the artist’s “trip through the innocence of childhood and adolescence and into the darker aspects of life beyond.”

TODD HIDO (b.1968, Kent, OH) is a San Francisco Bay Area-based artist who received his MFA from the California College of Arts and Crafts in 1996, where he studied under Larry Sultan, and his BFA from the School of the Museum of Fine Arts, Boston and Tufts University. His photographs have been exhibited internationally, including solo exhibitions at the Cleveland Museum of Art and the Kemper Museum of Contemporary Art in Kansas City, and are included in numerous museum collections, including the Whitney Museum of Art, Guggenheim Museum, San Francisco Museum of Modern Art, and the Los Angeles County Museum of Art, as well as in many other public and private collections. His work has been featured in Artforum, The New York Times Magazine and Vanity Fair, among others. Excerpts from Silver Meadows, published by Nazraeli Press, is Hido’s sixth monograph. He is an adjunct professor at the California College of Art, San Francisco, California.

, a 108 page monograph published by Nazraeli Press, accompanies the exhibition.