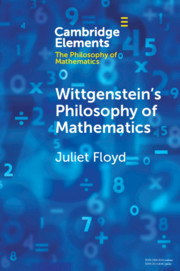 The book, published by Cambridge University Press, is described thus:

“For Wittgenstein mathematics is a human activity characterizing ways of seeing conceptual possibilities and empirical situations, proof and logical methods central to its progress. Sentences exhibit differing ‘aspects’, or dimensions of meaning, projecting mathematical ‘realities’. Mathematics is an activity of constructing standpoints on equalities and differences of these. Wittgenstein’s Later Philosophy of Mathematics (1934–1951) grew from his Early (1912–1921) and Middle (1929–33) philosophies, a dialectical path reconstructed here partly as a response to the limitative results of Gödel and Turing.”