Only a quarter of lawyers of the time attended law school; most learned their trade through apprenticeship. The Law School became BU’s second school, introducing the first three-year sequenced curriculum and entrance requirements to legal education. Unlike most schools, BU Law accepted women and people of all races and religious beliefs. 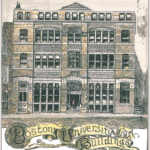 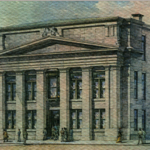 at the dedication of the new building. His speech shocked many with his view that the law was just a business, predicting what the next court will decide in the next case. He suggested that a contract was just an option either to perform or to pay damages, and noted that a “bad man” does not care about ethics or lofty ideals—rather, the “bad man” simply wants to know what will keep him out of jail or allow him to avoid paying damages.

BU Law became a charter member of the Association of American Law Schools.

William Howard Taft, who served as President of the United States from 1909 to 1913, lectured on legal ethics at BU Law from 1918 until 1921, when he was appointed Chief Justice of the US Supreme Court. 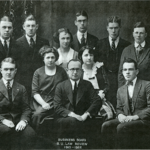 The Boston University Law Review was established, providing analysis and commentary on all areas of the law. The first issue began with a foreword by Melville Madison Bigelow, a founding faculty member who taught for almost 50 years at BU Law, and included an article on “The Evolution of a World Court” by a leading international lawyer. 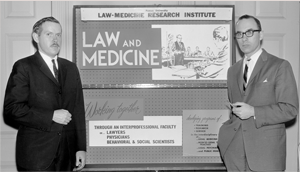 BU established the Law-Medicine Research Institute, one of the first medical-legal institutional collaborations in the United States. The Institute recognized the emerging field of health law, and was the foundation for today’s innovative Health Law Program.

BU Law was the first law school in New England—the second in the country—to offer a Master of Laws in Taxation program.

BU Law students begin participating in a voluntary defender program at Boston Municipal Court under the general supervision of members of the Massachusetts Bar. This program provided the basis for BU Law’s clinical program, which became formalized by the dean in 1965 as the Boston University Roxbury Defender Project. BU Law became one of the first law schools to staff its clinical programs with full-time faculty. It later added a civil litigation clinic, known as the Boston Legal Assistance Project, and the Student Prosecutor Program, in which student prosecutors handled misdemeanor and felony cases under faculty supervision. 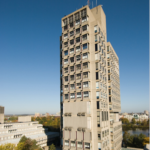 The School relocated to the Law Tower at 765 Commonwealth Avenue, which is now the central part of BU’s Charles River campus. Designed by Spanish architect Josep Lluis Sert, the tower is a leading example of Brutalist architecture, and the campus’ first high-rise building.

BU Law presented the first Silver Shingle Alumni Awards to distinguished alumni and friends in recognition of “notable contributions to the legal profession, leadership within the community, unfailing service to BU Law, and superlative contributions to society.”

The first issue of the American Journal of Law & Medicine is published. The quarterly journal, published jointly with the American Society of Law, Medicine and Ethics, is an interdisciplinary periodical containing professional articles, student notes and case comments; summaries of recent legislative and judicial developments; and book reviews in the area of health law and policy. Today, it is one of the country’s highest-ranked health law journals.

The Morin Center for Banking Law Studies, named in honor of Charles H. Morin (’49), was founded to conduct specialized research and provide educational programs in the field of banking and financial institutions.

The International Law Journal was established.

The Review of Banking & Financial Law published its first issue.

The Public Interest Project (PIP), a student organization, started raising funds to provide fellowships to first- and second-year students working in summer public-interest jobs. Its primary fundraising event is the annual PIP Auction, one of the most popular events on the School calendar.

BU Law launched the LLM Program in Banking & Financial Law, the first graduate program in the US to devote itself entirely to the study of banking and financial services law. 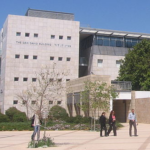 The Study Abroad Program began with programs in Tel Aviv, Israel, and Lyon, France. Today students can study all over the world in single-semester and one-year programs in Europe, Asia, the Middle East, and South America.

The LLM in American Law Program was established to provide foreign-trained lawyers with a basic grounding in American law and the US legal system by integrating them into the JD curriculum.

The Journal of Science & Technology Law was first published. 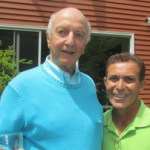 Professor Stanley Fisher helped launch the New England Innocence Project, which provides pro bono legal assistance to inmates challenging their wrongful convictions. In 2014, Victor Rosario was granted a new trial and released on bail, in part thanks to the work of Fisher and his students in BU Law’s Wrongful Convictions Clinic.

The Intellectual Property Law LLM Program was launched, accepting both domestic and international lawyers who wish to take advantage of the School’s extraordinary strength in intellectual property teaching. 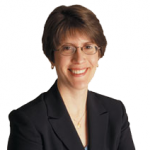 Maureen A. O’Rourke became the first woman leader of BU Law, serving as acting dean for two years prior to accepting the post of Dean of the School of Law in 2006. In 2014, she was named one of the 25 most influential people in legal education by The National Jurist and made the Lawdragon 500 list of “The Leading Lawyers in America”.

The Pro Bono Program was created. Students dedicate their developing legal skills, volunteering pro bono during the school year to provide unmet legal services in the Boston area, throughout the US, and around the world. 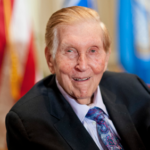 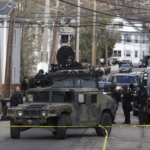 Two bombs exploded at the Boston Marathon on April 15, killing several people, including a BU student, and injuring hundreds more. The groundbreaking ceremony for the Sumner M. Redstone Building, originally scheduled for April 19, was cancelled due to the City of Boston’s “shelter in place” policy while law enforcement pursued the Boston Marathon bombing suspects. 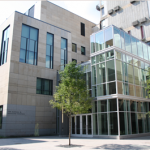 BU Law held the dedication ceremony for the Sumner M. Redstone Building on September 19, 2014. Sandra Lynch (’71), Chief Judge for the US Court of Appeals for the First Circuit, delivered the keynote address. The new five-story building houses 15 classrooms, McCausland Commons, and the Butler Atrium. 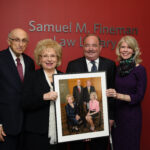 The law tower reopened after a complete renovation.

The Samuel M. Fineman Law Library was dedicated on September 25, 2015. 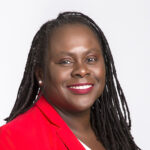 Dr. Angela Onwuachi-Willig joined BU Law as dean following a nation-wide search. A notable scholar of law and inequality, Dean Onwuachi-Willig has garnered widespread recognition for her writing and leadership on matters of employment discrimination, race, diversity, and family law.

Related to History of Boston University School of Law

BU Law has admitted qualified students without regard to race, gender, or religion since 1872.