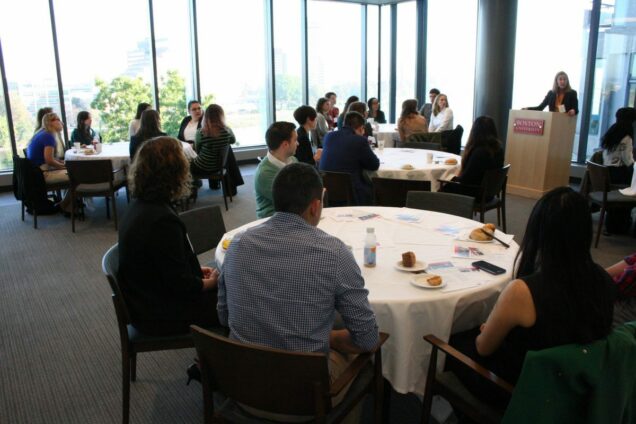 Elena Noureddine is PAIR’s Legal Director and a staff attorney at PAIR. Elena specializes in removal defense, criminal immigration, asylum, and Special Immigrant Juvenile Status. She is a recognized expert in detention and removal issues and unaccompanied minors cases and often participates in legal training and immigration-related outreach events. She received her B.A. in Political Science and Criminology from the University of Florida and her J.D. from Boston University School of Law. In law school, Elena participated in Boston University’s Asylum and Human Rights Clinic, representing clients in USCIS interviews and before the Executive Office for Immigration Review. She focused on the representation of juveniles facing deportation who, because of their age, are often neglected for services and go unrepresented. She is a native Spanish speaker and also speaks Arabic and Italian. Elena joined PAIR in 2014.

Vivian Huelgo joined the American Bar Association Commission on Domestic & Sexual Violence as Chief Counsel in 2010. Under her leadership, the Commission has expanded its reach and solidified its mission to increase access to justice for victims of domestic & sexual violence by mobilizing the legal profession. Over the last several years, Vivian has established a broad, inclusive vision for the Commission’s work, sponsoring critical policy, increasing its online presence, doubling funding for training and technical assistance to lawyers nationally, and establishing the Task Force on Human Trafficking, while also celebrating the 20th anniversary of the Commission.

Vivian has worked at the intersection of law and gender-based violence for twenty years. She started her legal career as a prosecutor in the New York County District Attorney’s Office. Vivian served as Director of Legal Services at Safe Horizon, Inc. the nation’s largest crime victim’s agency. As Community Law Project Director at Sanctuary for Families, she managed staff attorneys and pro bono lawyers representing domestic violence and human trafficking victims from marginalized populations including immigrant and LGBT communities.

Vivian led planning for a Family Justice Center at the Office of the Mayor, City of New York. She has lectured for the US Department of State, Coalition against Trafficking, and the ABA globally on Gender Based Violence, Human Trafficking, and Access to Justice. In 2015, Vivian was chosen as a selected fellow of Move to End Violence, a program of the NoVo Foundation. She is also a recipient of the Flor de Maga Award for Women in the Legal Profession from the Puerto Rican Bar Association. Ms. Huelgo is a graduate of Fordham University School of Law where she served as an Adjunct Associate Professor of Law and received both the Andrew A. Rivera Alumni Achievement Award and the Louis J. Lefkowitz Public Service Award.