Abstract:  Herein, we report the development of continuous flow photoreactors for large scale ESIPT-mediated [3 +2]-photocycloaddition of  2-(p-methoxyphenyl)-3-hydroxyflavone and cinnamate-derived dipolarophiles. These reactors can be efficiently numbered up to increase throughput two orders of magnitude greater than the corresponding batch reactions.

Abstract: Multiple myeloma (MM) is a frequently incurable hematological cancer in which overactivity of MYC plays a central role, notably through up-regulation of ribosome biogenesis and translation. To better understand the oncogenic program driven by MYC and investigate its potential as a therapeutic target, we screened a chemically diverse small-molecule library for anti-MM activity. The most potent hits identified were rocaglate scaffold inhibitors of translation initiation. Expression profiling of MM cells revealed reversion of the oncogenic MYC-driven transcriptional program by CMLD010509, the most promising rocaglate. Proteome-wide reversion correlated with selective depletion of short-lived proteins that are key to MM growth and survival, most notably MYC, MDM2, CCND1, MAF, and MCL-1. The efficacy of CMLD010509 in mouse models of MM confirmed the therapeutic relevance of these findings in vivo and supports the feasibility of targeting the oncogenic MYC-driven translation program in MM with rocaglates.

The National Institutes of Health (NIH) has awarded a four-year grant to Center for Molecular Discovery researcher Lauren Brown and collaborators Leah Cowen (University of Toronto) and Luke Whitesell (Whitehead Institute for Biomedical Research at MIT) on "Targeting Hsp90 in crytococcal fungal pathogenesis." The assembled team combines expertise in fungal biology (Cowen), medicinal chemistry (Brown) and pharmacology/experimental therapeutics (Whitesell) with the goal of developing drug-like small-molecule probes for use in studying disease mechanisms of the fungus Cryptococcus.

Invasive Cryptococcus infections pose a grave threat to human health and have enormous economic consequences. Cryptococcal meningitis, the major clinical manifestation of the disease, has a 100% mortatlity rate if left untreated. Even with the best available therapies, mortality rates remain high at 35-40% due to a limited number of drug classes available, and compromised usefulness of these drugs caused by both dose-limiting toxicity and the emergence of high-grade antifungal drug resistance.

In this project, the team will collaborate to develop small molecule chemical compounds to study a critical molecular mechanism that supports both fungal virulence and the onset of drug-resistance. These compounds will also impact clinical care by serving as promising leads for the future development of new, more effective antifungal drugs.

The National Institutes of Health, Institute of General Medical Sciences (NIGMS), has awarded Professor John Porco and coworkers a five year MIRA (R35) grant entitled “Chemical Synthesis of Complex Natural Products for Translational Science.”  The Maximizing Investigators' Research Award (MIRA-R35), an Outstanding Investigator Award, is a grant that provides support for all of the research in an investigator's laboratory that falls within the mission of NIGMS. Within these bounds, investigators have the freedom to explore new avenues of inquiry that arise during the course of their research. The goals of the MIRA (R35) research program are to continue chemical syntheses of bioactive molecules and expand efforts and capabilities in translational science. The MIRA effort effectively replaces two previous NIGMS-funded RO1 grants (Biomimetic Synthesis of Complex Natural Products (GM-073855) and Chemical Synthesis of Bioactive Flavonoid and Xanthone-Derived Natural Products (GM-099920) which were highly productive and led to 41 publications from 2010 – 2015. As part of the MIRA project, the Porco group will continue development of novel synthetic methodologies for concise entry to bioactive classes of natural products including oxaphenalenones, meroterpenoids, polyprenylated acylphloroglucinols, tetrahydroxanthones, and dimeric chromones. The project will also continue major emphasis on collaborations to study biological properties and mode of action (MoA) of target molecules for ultimate use as pharmacological therapies for human cancers as well as viral and bacterial illnesses.

Congratulations to Dr. William Devine and Professors Aaron Beeler and John Porco on their paper “Fine-tuning of macrophage activation using synthetic rocaglate derivatives” in Nature Scientific Reports, published April, 2016. This work, on novel activity identified for the rocaglates, was done in collaboration with the Beeler group, the CMD and with our collaborator Igor Kramnik, and coworkers, at the BU NEIDL.

Abstract: Drug-resistant bacteria represent a significant global threat. Given the dearth of new antibiotics, host-directed therapies (HDTs) are especially desirable. As IFN-gamma (IFNγ) plays a central role in host resistance to intracellular bacteria, including Mycobacterium tuberculosis, we searched for small molecules to augment the IFNγ response in macrophages. Using an interferon-inducible nuclear protein Ipr1 as a biomarker of macrophage activation, we performed a high-throughput screen and identified molecules that synergized with low concentration of IFNγ. Several active compounds belonged to the flavagline (rocaglate) family. In primary macrophages a subset of rocaglates 1) synergized with low concentrations of IFNγ in stimulating expression of a subset of IFN-inducible genes, including a key regulator of the IFNγ network, Irf1; 2) suppressed the expression of inducible nitric oxide synthase and type I IFN and 3) induced autophagy. These compounds may represent a basis for acrophage-directed therapies that fine-tune macrophage effector functions to combat intracellular pathogens and reduce inflammatory tissue damage. These therapies would be especially relevant to fighting drug-resistant pathogens, where improving host immunity may prove to be the ultimate resource.

Professor Porco spoke at The 33rd Herbert C. Brown Lectures in Organic Chemistry, Purdue University, on April 15, 2016. His talk was entitled “Chemical Synthesis and Biological Studies of the Rocaglates and Derivatives.”

Abstract:  The plant genus Aglaia produces a number of secondary metabolites including the cyclopenta[b]benzofuran silvestrol. Cyclopenta[b]benzofuran natural products possess potent anticancer properties due to modulation of the activity of the RNA helicase eukaryotic initiation factor 4A (eIF4A), which is involved in loading ribosomes onto mRNA templates during translation initiation, a step frequently deregulated in cancer. In this presentation, we will describe our efforts to synthesize silvestrol and rocaglate analogues using photocycloaddition of 3-hydroxyflavones with various dipolarophiles, and evaluation of the rocaglates produced as inhibitors of eukaryotic protein translation. 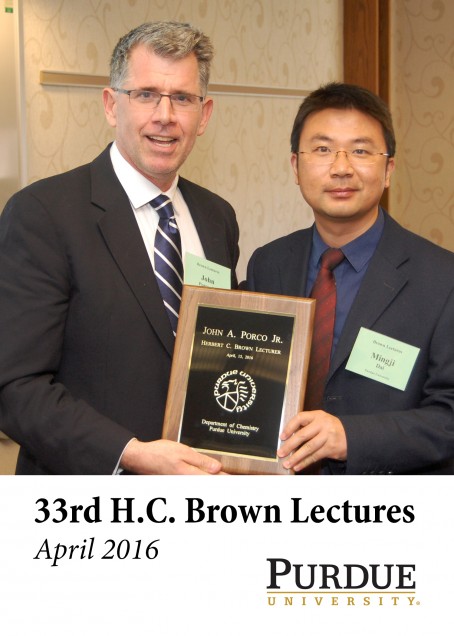