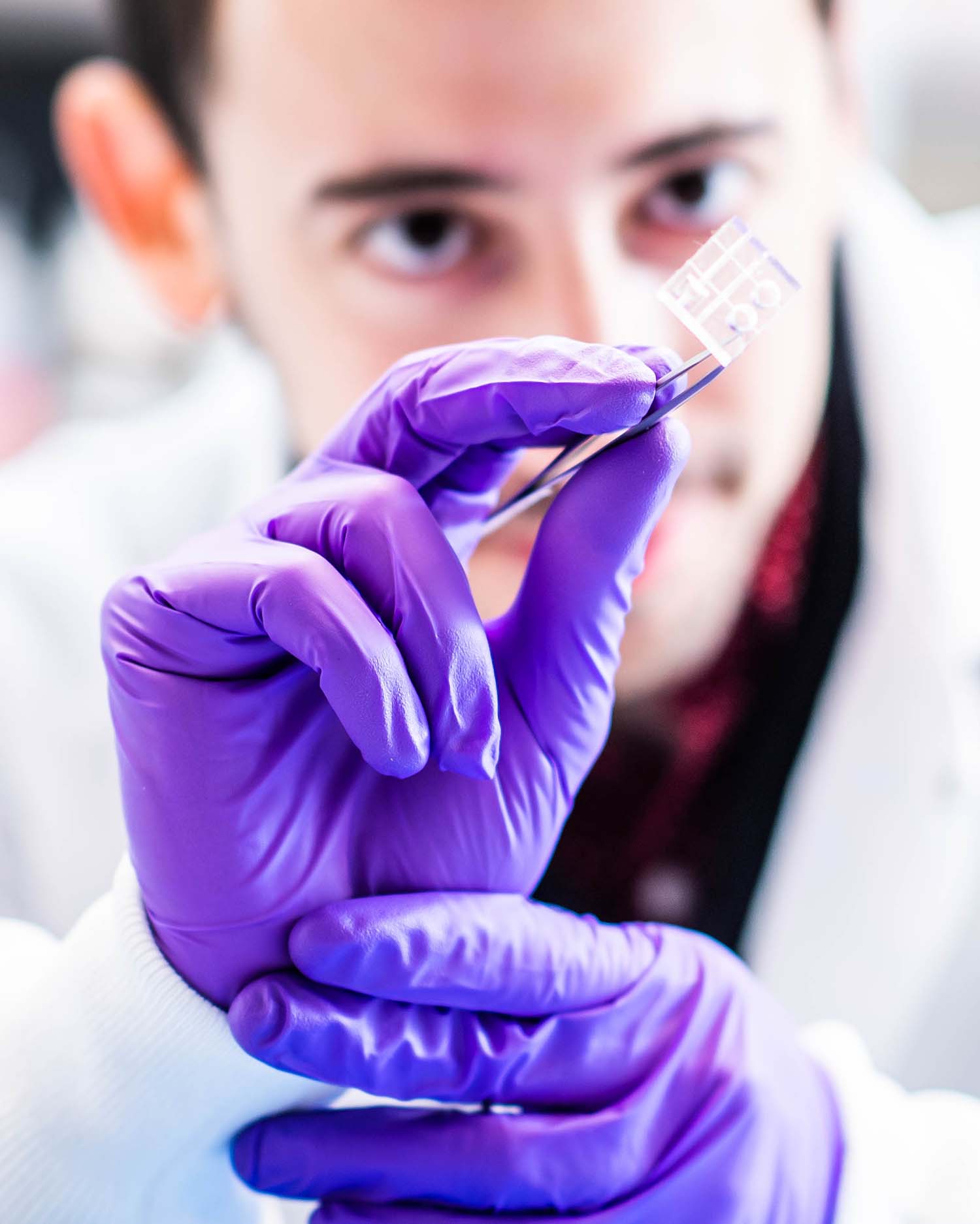 A miniature replica of a heart chamber made from engineered parts and tissue from stem cells—and all contained on a chip not much bigger than a postage stamp—could help researchers study disease and test new treatments. Photo by Jackie Ricciardi

There’s no safe way to get a close-up view of the human heart as it goes about its work: you can’t just pop it out, take a look, then slot it back in. Scientists have tried different ways to get around this fundamental problem: they’ve hooked up cadaver hearts to machines to make them pump again, attached lab-grown heart tissues to springs to watch them expand and contract. Each approach has its flaws: reanimated hearts can only beat for a few hours; springs can’t replicate the forces at work on the real muscle. But getting a better understanding of this vital organ is urgent: in America, someone dies of heart disease every 36 seconds, according to the Centers for Disease Control and Prevention.

Now, an interdisciplinary team of engineers, biologists, and geneticists has developed a new way of studying the heart: they’ve built a miniature replica of a heart chamber from a combination of nanoengineered parts and human heart tissue. There are no springs or external power sources—like the real thing, it just beats by itself, driven by the live heart tissue grown from stem cells. The device could give researchers a more accurate view of how the organ works, allowing them to track how the heart grows in the embryo, study the impact of disease, and test the potential effectiveness and side effects of new treatments—all at zero risk to patients and without leaving a lab.

The Boston University–led team behind the gadget—nicknamed miniPUMP, and officially known as the cardiac miniaturized Precision-enabled Unidirectional Microfluidic Pump—says the technology could also pave the way for building lab-based versions of other organs, from lungs to kidneys. Their findings have been published in Science Advances.

“We can study disease progression in a way that hasn’t been possible before,” says Alice White, a BU College of Engineering professor and chair of mechanical engineering. “We chose to work on heart tissue because of its particularly complicated mechanics, but we showed that, when you take nanotechnology and marry it with tissue engineering, there’s potential for replicating this for multiple organs.”

According to the researchers, the device could eventually speed up the drug development process, making it faster and cheaper. Instead of spending millions—and possibly decades—moving a medicinal drug through the development pipeline only to see it fall at the final hurdle when tested in people, researchers could use the miniPUMP at the outset to better predict success or failure.

The project is part of CELL-MET, a multi-institutional National Science Foundation Engineering Research Center in Cellular Metamaterials that’s led by BU. The center’s goal is to regenerate diseased human heart tissue, building a community of scientists and industry experts to test new drugs and create artificial implantable patches for hearts damaged by heart attacks or disease.

“Heart disease is the number one cause of death in the United States, touching all of us,” says White, who was chief scientist at Alcatel-Lucent Bell Labs before joining BU in 2013. “Today, there is no cure for a heart attack. The vision of CELL-MET is to change this.”

There’s a lot that can go wrong with your heart. When it’s firing properly on all four cylinders, the heart’s two top and two bottom chambers keep your blood flowing so that oxygen-rich blood circulates and feeds your body. But when disease strikes, the arteries that carry blood away from your heart can narrow or become blocked, valves can leak or malfunction, the heart muscle can thin or thicken, or electrical signals can short, causing too many—or too few—beats. Unchecked, heart disease can lead to discomfort—like breathlessness, fatigue, swelling, and chest pain—and, for many, death.

“The heart experiences complex forces as it pumps blood through our bodies,” says Christopher Chen, a BU William F. Warren Distinguished Professor and a BU College of Engineering professor of biomedical engineering. “And while we know that heart muscle changes for the worse in response to abnormal forces—for example, due to high blood pressure or valve disease—it has been difficult to mimic and study these disease processes. This is why we wanted to build a miniaturized heart chamber.”

At just 3 square centimeters, the miniPUMP isn’t much bigger than a postage stamp. Built to act like a human heart ventricle—or muscular lower chamber—its custom-made components are fitted onto a thin piece of 3D-printed plastic. There are miniature acrylic valves, opening and closing to control the flow of liquid—water, in this case, rather than blood—and small tubes, funneling that fluid just like arteries and veins. And beating away in one corner, the muscle cells that make heart tissue contract, cardiomyocytes, made using stem cell technology.

On the left, a chamber of the miniPUMP beats thanks to the contraction of the cardiac tissue. As the tissue beats, it ejects fluid out of the chamber (right)—just as a human heart would pump blood. Credit: from Michas et al., Sci. Adv. 8, eabm3791 (2022). This work is licensed under CC BY-NC

“They’re generated using induced pluripotent stem cells,” says Christos Michas (ENG’21), a postdoctoral researcher who designed and led the development of the miniPUMP as part of his PhD thesis.

To make the cardiomyocyte, researchers take a cell from an adult—it could be a skin cell, blood cell, or just about any other cell—reprogram it into an embryonic-like stem cell, then transform that into the heart cell. In addition to giving the device literal heart, Michas says the cardiomyocytes also give the system enormous potential in helping pioneer personalized medicines. Researchers could place a diseased tissue in the device, for instance, then test a drug on that tissue and watch to see how its pumping ability is impacted.

“With this system, if I take cells from you, I can see how the drug would react in you, because these are your cells,” says Michas. “This system replicates better some of the function of the heart, but at the same time, gives us the flexibility of having different humans that it replicates. It’s a more predictive model to see what would happen in humans—without actually getting into humans.”

According to Michas, that could allow scientists to assess a new heart disease drug’s chances of success long before heading into clinical trials. Many drug candidates fail because of their adverse side effects.

“At the very beginning, when we’re still playing with cells, we can introduce these devices and have more accurate predictions of what will happen in clinical trials,” says Michas. “It will also mean that the drugs might have fewer side effects.”

Thinner Than a Human Hair

One of the key parts of the miniPUMP is an acrylic scaffold that supports, and moves with, the heart tissue as it contracts. A series of superfine concentric spirals—thinner than a human hair—connected by horizontal rings, the scaffold looks like an artsy piston. It’s an essential piece of the puzzle, giving structure to the heart cells—which would just be a formless blob without it—but not exerting any active force on them.

“We don’t think previous methods of studying heart tissue capture the way the muscle would respond in your body,” says Chen, who’s also director of BU’s Biological Design Center and an associate faculty member at Harvard University’s Wyss Institute for Biologically Inspired Engineering. “This gives us the first opportunity to build something that mechanically is more similar to what we think the heart is actually experiencing—it’s a big step forward.”

To print each of the tiny components, the team used a process called two-photon direct laser writing—a more precise version of 3D printing. When light is beamed into a liquid resin, the areas it touches turn solid; because the light can be aimed with such accuracy—focused to a tiny spot—many of the components in the miniPUMP are measured in microns, smaller than a dust particle.

The decision to make the pump so small, rather than life-size or larger, was deliberate and is crucial to its functioning.

“The structural elements are so fine that things that would ordinarily be stiff are flexible,” says White. “By analogy, think about optical fiber: a glass window is very stiff, but you can wrap a glass optical fiber around your finger. Acrylic can be very stiff, but at the scale involved in the miniPUMP, the acrylic scaffold is able to be compressed by the beating cardiomyocytes.”

Chen says that the pump’s scale shows “that with finer printing architectures, you might be able to create more complex organizations of cells than we thought was possible before.” At the moment, when researchers try to create cells, he says, whether heart cells or liver cells, they’re all disorganized—“to get structure, you have to cross your fingers and hope the cells create something.” That means the tissue scaffolding pioneered in the miniPUMP has big potential implications beyond the heart, laying the foundation for other organs-on-a-chip, from kidneys to lungs.

According to White, the breakthrough is possible because of the range of experts on CELL-MET’s research team, which included not just mechanical, biomedical, and materials engineers like her, Chen, and Arvind Agarwal of Florida International University, but also geneticist Jonathan G. Seidman of Harvard Medical School and cardiovascular medicine specialist Christine E. Seidman of Harvard Medical School and Brigham and Women’s Hospital. It’s a breadth of experience that’s benefited not just the project, but Michas. An electrical and computer engineering student as an undergraduate, he says he’d “never seen cells in my life before starting this project.” Now, he’s preparing to start a new position with Seattle-based biotech Curi Bio, a company that combines stem cell technology, tissue biosystems, and artificial intelligence to power the development of drugs and therapeutics.

Christos Michas taking a real-time side view image of the miniPUMP in the lab. The scaffold that gives structure to the heart cells—without exerting any active force on them—can be seen through the tissue. Photo by Jackie Ricciardi

“Christos is someone who understands the biology,” says White, “can do the cell differentiation and tissue manipulation, but also understands nanotechnology and what’s required, in an engineering way, to fabricate the structure.”

The next immediate goal for the miniPUMP team? To refine the technology. They also plan to test ways to manufacture the device without compromising its reliability.

“There are so many research applications,” says Chen. “In addition to giving us access to human heart muscle for studying disease and pathology, this work paves the way to making heart patches that could ultimately be for someone who had a defect in their current heart.”

Other researchers on this project included Kamil Ekinci, a BU College of Engineering professor of mechanical engineering and of materials science and engineering, Jeroen Eyckmans, an ENG research assistant professor of biomedical engineering, M. Çağatay Karakan (ENG’22), and Pranjal Nautiyal, a postdoctoral researcher at the ​​University of Pennsylvania who recently completed his PhD at Florida International University.