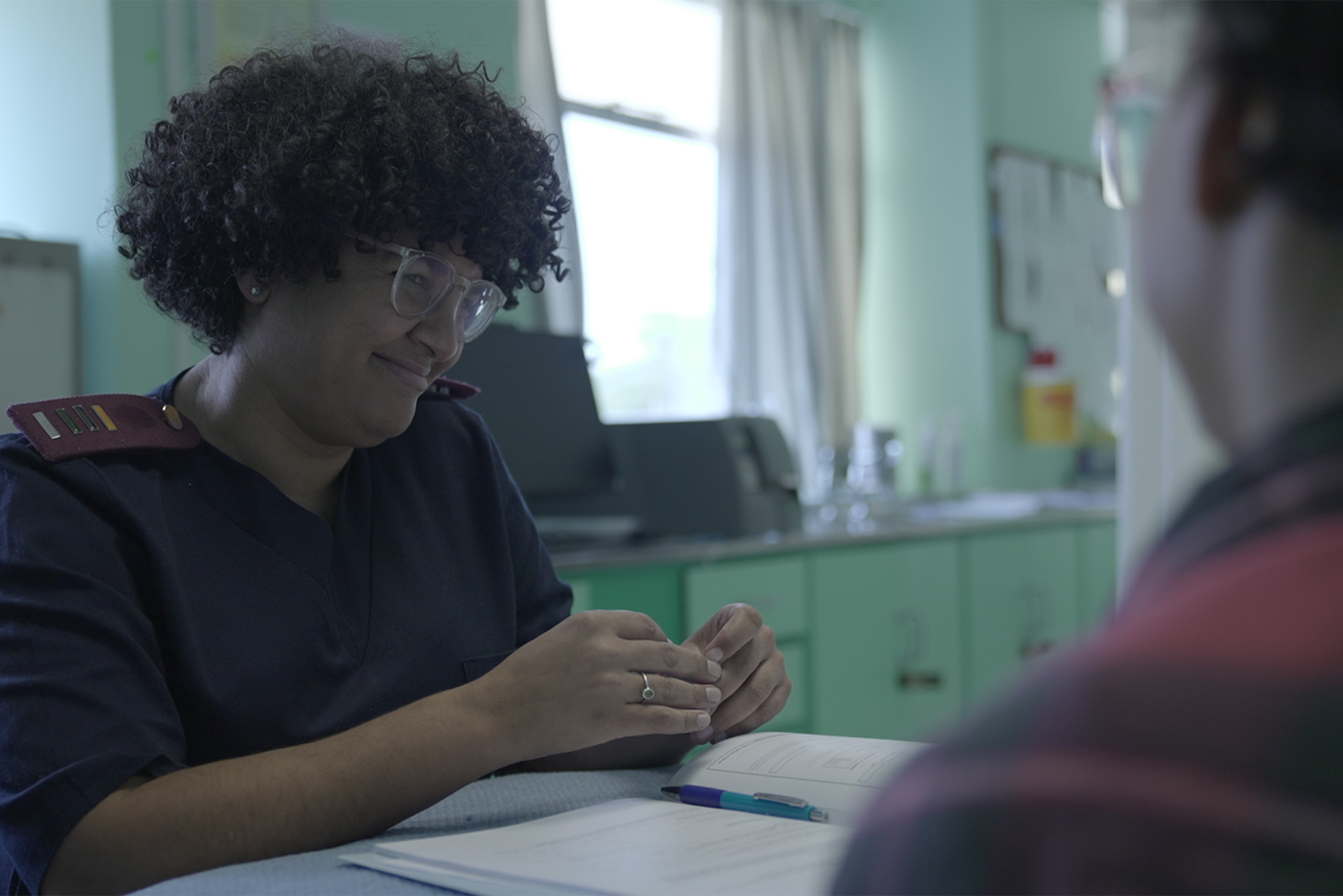 South Africa has one of the highest rates of perinatal depression in the world; a new research-infused clinician training film aims to get patients the help they need

Your baby is the size of a lentil, now a grape, a lemon, an apple, finally, a small pumpkin. Fueled by reading weekly emails comparing growing babies to progressively bigger fruits and reaching milestones like first ultrasound images, pregnancy can be a time of intense anticipation and excitement. But there can be dark moments, too—for some, the light doesn’t even edge in at all. Carrying, having, and caring for a baby can put parents at increased risk of mental health disorders during and after pregnancy, including depression and anxiety, even psychoses.

In the United States, 1 in 8 women experience postpartum depression, according to the Centers for Disease Control and Prevention, but globally the number is much higher—closer to 1 in 6. At Boston University College of Health & Rehabilitation Sciences: Sargent College, researchers have been studying a nation with some of the highest rates in the world: South Africa. One analysis found that in pregnancy, 21 to 39 percent of South African women were at risk of, or were suffering from, antenatal depression; the figure remained between 16 and 32 percent postnatally.

Sargent researchers have found that limited access to services, as well as socioeconomic and social factors—including high levels of HIV and food insecurity—are all to blame for the stubbornly high rates. Now, a new initiative aims to turn that research into action.

After working in the country alongside the Cape Town–based nonprofit Perinatal Mental Health Project (PMHP), occupational therapist Leah Smith (Sargent’22) has codeveloped a training film for maternity care workers to help them better support their patients. Her film, which will be shared nationwide by South Africa’s National Department of Health, walks providers through a series of clinical scenarios, suggesting different approaches and outlining best practices.

“South Africa has one of the highest maternal mental health burdens in the world,” says Smith. The training film—including an accompanying report outlining the research underpinning it and lessons from its production—was her doctoral capstone. “After diving into the literature, I found digital education and video education methods are a feasible way to scale up psychosocial support in middle-income countries.”

Smith’s research has focused on the emerging role of occupational therapists in caring for expectant and new parents. Occupational therapy is most commonly associated with helping people with disabilities or injuries develop, regain, or maintain the skills they need to function and participate in everyday activities, or occupations. But Smith sees a broader application for the profession—one she applied to the film project. “Mental health impacts functioning,” says Smith, who’s conducted qualitative research interviews with healthcare providers around the world about her profession’s potential to better support mental health. “Occupational therapists are trained to consider the context and environment of their clients in order to enable meaningful participation, which is out-of-the-box thinking from traditional biomedical models.”

A Right to Healthcare

Just as Americans have the rights to free speech, religion, and assembly, South Africans have a constitutionally guaranteed right to healthcare. In practice though, things don’t always work out so neatly, particularly when it comes to perinatal mental health care.

A series of papers—coauthored by Shelley Brown, a Sargent clinical assistant professor of health sciences—have shown that South African women face multiple barriers to getting the help they need while pregnant. Brown conducted in-depth interviews with South African doctors, doulas, nurse-midwives, and psychologists, finding that a lack of funding prevented many clinics from delivering on the constitution’s promise. She discovered that mental health care is often sidelined in favor of physical treatment, there aren’t enough antenatal and mental health providers (and existing ones don’t get enough training and support), and social determinants impacting patients—like their home environment or personal relationships—aren’t always considered by clinicians.

The gap between aspiration and reality was brought home to Smith during her time in the country. In May, she traveled to South Africa as a graduate student representative on a service-learning trip for undergraduates, using the visit as an opportunity to advance her research and work on the film. Sitting in a busy Cape Town antenatal waiting room filled with expectant mothers, Smith watched with astonishment as nurses heckled, rebuked, and belittled those in their care.

“I was shocked at the way nurses interacted with patients,” says Smith, who spent much of her time in Cape Flats, a notorious area of townships and housing projects that was blighted by apartheid and is considered one of the most dangerous in South Africa. “They would yell names, humiliate those who didn’t have partners with them, especially if it was an unplanned pregnancy or if there was a younger patient, reprimand them if they didn’t know the date of their last menstrual period.”

And there was no privacy: only curtains separated consultation rooms from busy corridors packed with waiting patients. Even a private humiliation ended up having an audience.

One maternity care worker told Smith the obstetric violence was “subconscious, we’ve learned it. It’s a systemic problem and goes beyond nurses. There is a lot that is being put on us. It has always been like this, staff are overburdened.”

Connection between Mental Health and Function

Filmed on location in a Cape Town maternity hospital, the video, No Maternal Health Without Mental Health, includes four fictional scenes showing midwives discussing how they provide psychosocial support to patients, including the challenges they face and ways to more positively and empathetically engage with families. Each scene is interspersed with discussion questions to guide viewers, while on-screen text highlights key skills and messages. Smith was an assistant director on the film, working with a local director and actors.

She says she drew on her doctoral research, as well as that of Brown, to write the scripts and “highlight the connection between mental health and functioning at work, at home, and in the community.” After sketching out her initial drafts, she worked with PMHP to contextualize the film for South Africa and the nurses who’d be watching it, especially those in areas with limited resources.

According to Simone Honikman, founding director of PMHP and an associate professor of public mental health at the University of Cape Town, Smith was “mindful of her role as an outsider coming into our service setting.” She says Smith also helped guide her organization’s counselors, Liesl Hermanus and Tyla Prinsloo, on how occupational therapy (OT) could support their work.

“She described the debilitating features of these conditions in OT terms and how OT approaches provide an opportunity to provide holistic support so that clients are enabled to participate fully in many aspects of life,” says Honikman. “Leah also touched on the interventions used by occupational therapists, such as behavioral activation, tapping into the resilience of clients, psychoeducation, and CBT [cognitive behavioral therapy]. This was a great learning experience for our team, given our limited access to an occupational therapist on site.”

Bringing a research spin to the film’s production, Smith conducted stakeholder interviews after the first cut was in the can, connecting with activists, academics, and health professionals to refine the film. One big change: the film’s closing scene, showing a positive engagement between a nurse and patient in the clinic, was cut way back.

“It was very long and resembled more of a counseling session than something nurses could reasonably implement,” says Smith. “We didn’t want it to feel intimidating—we significantly cut that part of the script.

In addition to being shared with health providers by South Africa’s National Department of Health and PMHP, Honikman says the 20-minute film will be used during in-person training sessions.

“Given the high levels of disrespect and abuse in maternity care settings, and the high prevalence of common mental health conditions among women who are pregnant or who have recently given birth,” says Honikman, “the film is likely to have significant impact in terms of maternal well-being.”

After watching an early version and speaking with Smith, the healthcare workers in that busy Cape Town antenatal clinic—the one with the waiting room heckling and lack of privacy—have already decided to make some changes. Patients are now called to appointments more respectfully and no longer have to wait in corridors or within hearing distance of private consultations.