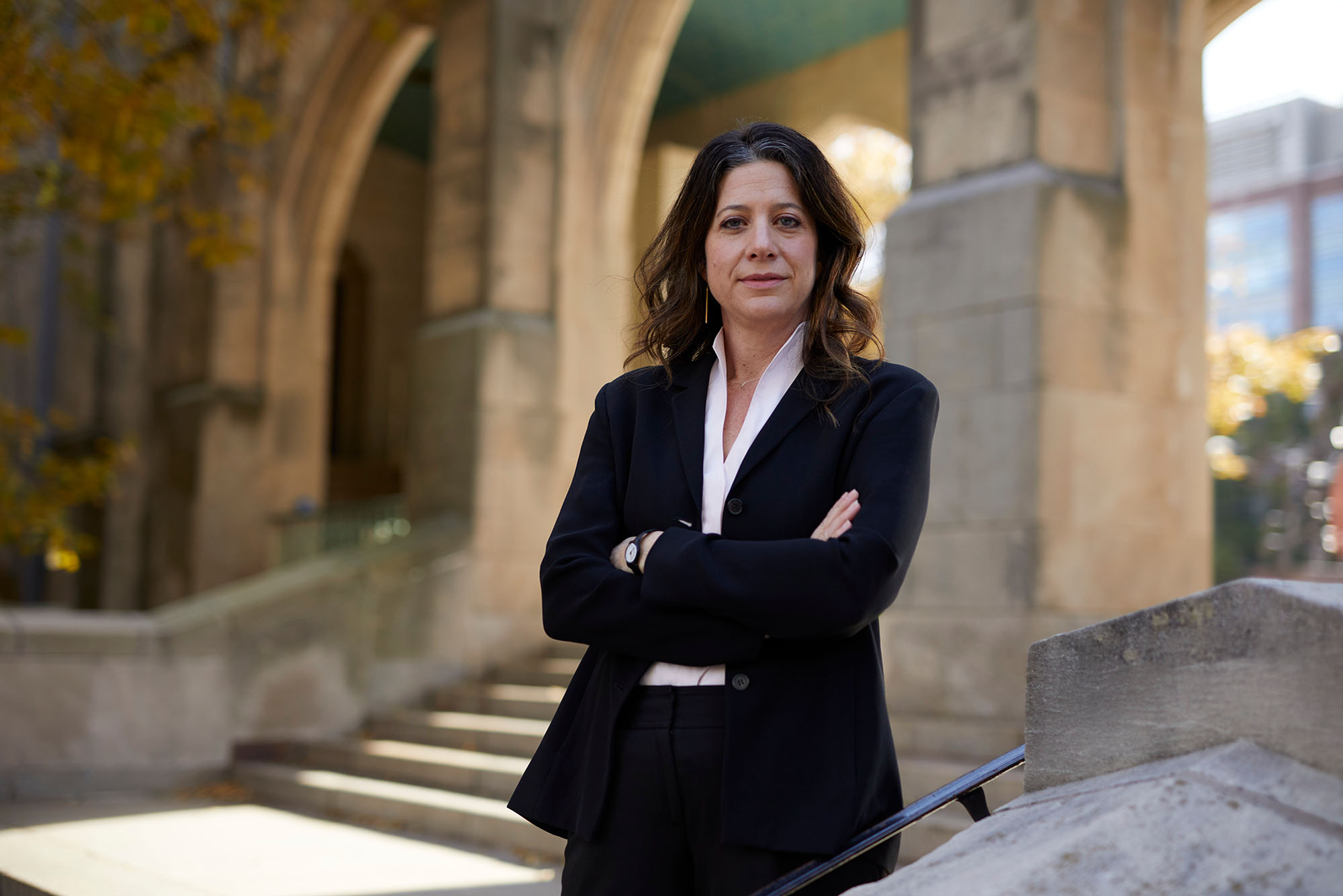 As a graduate student, Jessica Silbey earned a dual JD and PhD in comparative literature: “I see the statutes and cases, even the Constitution, as narrative explanations of how we think the world is or should be,” she says. Photo by Kent Dayton

How Copyrights, Patents, and Trademarks May Stifle Creativity and Progress

Intellectual property scholar Jessica Silbey argues laws haven’t kept pace with the digital era and are enriching individuals and corporations at the expense of society, equality, and innovation

In a moment when the fabric of American society is fraying to threadbare, intellectual property law may seem like an unlikely battleground for social justice. But constitutional and intellectual property law expert Jessica Silbey believes challenging the legal conventions that protect creators and artists is vital to the pursuit of a fairer world.

Silbey is the author of Against Progress: Intellectual Property and Fundamental Values in the Internet Age (Stanford University Press, 2022) and her research takes aim at a central principle of intellectual property (IP) law—that money is an essential driver of human ingenuity and risk-taking and is key to fostering scientific and societal progress. A Boston University School of Law professor of law, she argues that instead of advancing the public good, IP law is being used to enrich individuals and corporations at the expense of human values like equality, privacy, fairness, dignity, and community.

“We’ve lost the idea of public-mindedness, what it means to work for the collective rather than the individual,” says Silbey, a Yanakakis Faculty Research Scholar and 2018 Guggenheim Fellow. “I’m not against progress. I’m against the kind of progress that’s about the accumulation of things, without questioning the values they might undermine or promote.”

Innovation in the Digital Age

The traditional view of IP law is that copyrights, patents, and trademarks give creators a limited monopoly on their inventions or works so they can reap the financial benefits. According to Silbey, it presumes a creator’s paramount incentive is temporarily excluding others, preventing copies. “The right of exclusion is the way we talk about property. If I own something, I can prevent you from having it too,” says Silbey. “The paradigm case is land and trespass.” It’s an idea that has long struck her as too simplistic when it comes to IP.

As a graduate student at the University of Michigan—she earned a dual JD and PhD in comparative literature—Silbey marveled at the extraordinary art and writings, like those of poet Anna Akhmatova and novelist Aleksandr Solzhenitsyn, that came out of the Soviet Union “under deeply oppressive situations.” Later, as a young attorney practicing patent law, she saw how closely innovation was intertwined with collaboration and iteration. “We celebrate the idea of the sole mythic inventor, but teams innovate together all the time,” she says. If a team comes up with an idea, she asks, who owns it? And what about when unrelated teams in different places come up with the same innovation simultaneously?

“If you think about the old-fashioned IP rules as assuming that an inventor is the owner, then there is no problem,” says Silbey. “But that’s not the way most innovation happens today. When teams all around the world are working on the same problem, and come up with similar results, the first to file for the patent gets the patent. So, it becomes a race that can frustrate professional standards and ethics.”

For her 2015 book, The Eureka Myth: Creators, Innovators, and Everyday Intellectual Property (Stanford University Press), Silbey interviewed dozens of authors, artists, and inventors about the effect of IP law on their work. “What my first book showed—and many other later independent studies confirmed—is that most people aren’t incentivized by IP rights,” she says. “IP rights don’t function like a carrot. They’re just one small piece of a much larger puzzle of how creators earn to sustain their lives.”

Using extensive legal analysis of court cases, as well as interviews with creators, Silbey shines a light on the complex societal questions that have been obscured in today’s disputes around intellectual property. In Against Progress, she tells the story of Stan Rowin, an accomplished photographer who has shot for glossy titles like National Geographic and Vogue. In the early 2000s, when negotiating an assignment with publisher Condé Nast, Rowin (Questrom’73) encountered his first standardized freelance contract. Where before photographers typically retained copyrights to their images and licensed usage for fees, the terms of this new contract would transfer the copyright to the publisher in perpetuity, for no additional compensation. Rowin knew immediately that he couldn’t agree. He hired a lawyer—Andrew D. (Drew) Epstein (CAS’69, LAW’72)—fought back, and kept his copyright.

Rowin won the battle but lost the war. “After I signed the contract,” he told Silbey, “I never got work from them again.” By then, the market was awash with young digital photographers looking to make their mark. They cared less about copyrights than getting exposure. Veteran photographers like Rowin lost their leverage, and the standardized contract has become the norm, resulting in a dramatic decrease in freelance pay and, says Silbey, a lowering of professional quality.

“Does copyright have anything to do with it?” Silbey asks. “Who owns the copyright is one relevant fact, but it hasn’t fixed anything. Copyright doesn’t give me enough leverage to negotiate against Condé Nast. It doesn’t solve the problem of power dynamics or professional integrity. It actually prevents us from talking about the things we need to talk about: fair wages, labor equity, and abusive contracting provisions that take advantage of weaker parties.”

What’s more, Silbey argues, current IP law hasn’t evolved to keep pace with what innovation looks like in the digital age. Today, it’s more about sharing, adapting, and improving than conjuring ideas from scratch. Silbey advocates for shorter IP terms (currently, copyright lasts for 70 years past the death of the author) and for narrowing the scope of coverage. “Less would be protected, and more goes directly into the public domain, so everyday people could play or tinker…without facing lawsuits,” she says.

In the last 30 years, the US Supreme Court has decided IP cases at more than double the rate of previous decades. And the system is rife with abuse. Patent trolls have weaponized the legal system. These predatory companies buy up low-quality patents, not to speed new products to market, but for the sole purpose of extorting companies on the cutting edge, suing innovators who infringe on a patent they had no intention of developing. By some estimates, such litigation costs defendants $29 billion per year, and creators say the effect on research, development, and advancement is chilling.

“We need to make sense of the world as it is lived by everyday people,” Silbey says. “I’m arguing for a rebalancing of the private and public. IP is not about private property full stop. It’s about the public domain and its benefits to all. I’m asking for a reset.”

“A System of Living Together”

Silbey’s dual training in literature and the law continues to shape her views and her advocacy. During her time as an undergrad at Stanford University and a graduate student at Michigan, Silbey studied revolutionary Russian and French art and literature, later traveling to the Soviet Union and Ukraine, where she witnessed the latter country’s transition to independence in the early 1990s. It convinced her of “the power of language to change things.”

When she started her law career, Silbey clerked for two judges and worked at a Boston law firm where one of her major clients was Planned Parenthood. Those experiences brought home the far-reaching impacts of the law on the lives of real people. “I never think about law as isolated from everyday life,” she says. “I see the statutes and cases, even the Constitution, as narrative explanations of how we think the world is or should be.” And while Silbey knows reconceiving intellectual property won’t fix societal problems, she believes changing the conversation is a powerful first step.

“I wish we would think of IP more as a system of living together, rather than a system of exclusive rights,” she says. “I wish we could flip the IP script to talk more about what we have in common, what we share, and how to build a more sustainable public domain.”

How Copyrights, Patents, and Trademarks May Stifle Creativity and Progress

How Copyrights, Patents, and Trademarks May Stifle Creativity and Progress
0
share this