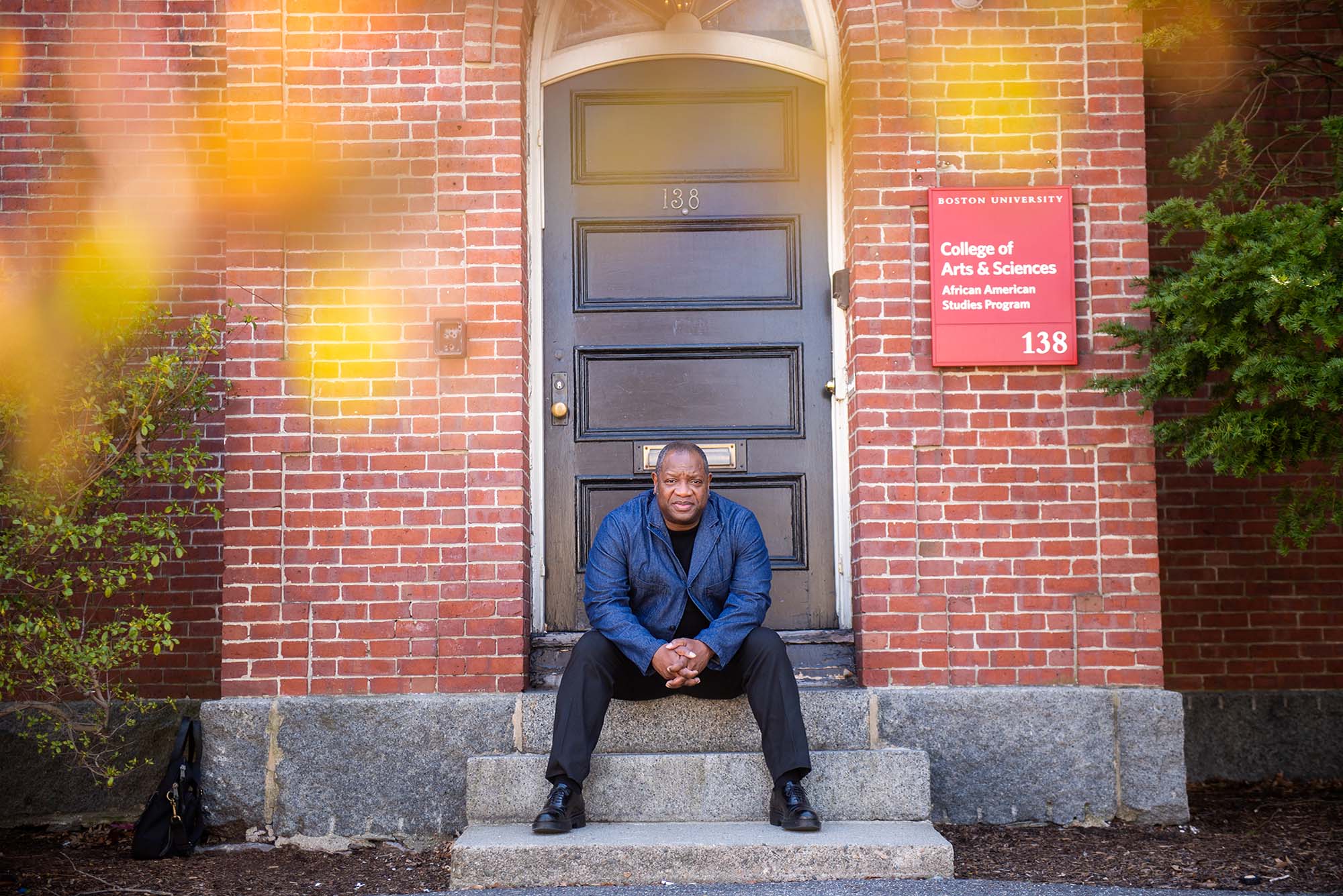 “Everyone was on board” with the new African American and Black diaspora studies major, says Louis Chude-Sokei, director of the African American Studies Program, “not just the remarkable AFAM faculty and staff, but [also] CAS and BU.”

To see how Louis Chude-Sokei has reshaped Boston University’s African American Studies Program in the five years since he became director, all you have to do is check out the course catalog: the 29 new offerings (some cross-listed with religion, law, political science, history, medicine, and other subjects) include Race, Memory, and Diaspora in US Popular Music; The Prison and Black Writing; Reparations, Restitution, Restorative Justice for Slavery and Jim Crow Segregation; and Race, Sex and Science Fiction (taught by Chude-Sokei, a lifelong science fiction aficionado).

Under the leadership of Chude-Sokei, the George and Joyce Wein Chair in African American Studies and a College of Arts & Sciences professor of English, the program has also added five new faculty and six faculty affiliates, with the goal of adding many more. The number of students signing up for the African American studies minor each year has grown from a handful to more than 40 at one point, with hundreds more taking individual classes.

Now comes the latest sign of the growing interest in, and the University’s support for, the program: African American studies, or AFAM, will become a major at BU this fall.

Along with its array of courses old and new, the program will include community internships, international travel, a more global approach to African American studies, which Chude-Sokei favors, and a new title that reflects that approach: African American and Black diaspora studies.

“African American studies at BU has always had a global component,” says Chude-Sokei, whose critically acclaimed memoir, Floating in a Most Peculiar Way (Houghton Mifflin Harcourt, 2021), is the story of his journey from the former nation of Biafra, where he was born, to a refugee camp in Gabon to Jamaica to Washington, D.C., to South Central Los Angeles, where he came of age navigating multiple Blacknesses. “It’s always been interested in Black peoples all over the world. But now the program is much more formally comparative, looking at different racial formations and experiences across the world. It’s also more interested in issues of gender, sexuality, and immigration.”

Founded in 1969 by the sociologist Adelaide Cromwell (Hon.’95), BU’s multidisciplinary African American Studies program is the country’s second oldest such program after San Francisco State University’s and is the first to offer a graduate degree in the subject. When Chude-Sokei arrived at BU five years ago, one of his goals was to establish African American studies as a major, a step that many of BU’s peer institutions had long since taken.

“BU was ready for it,” says Chude-Sokei, who is an expert on race, literature, music, and technology in the Black diaspora and the editor of Black Scholar, one of the country’s oldest and most respected Black literary journals. “I certainly didn’t do it alone. Everyone was on board with these goals.”

Crediting Chude-Sokei with strengthening the program, building a sense of community, and “rallying his colleagues to envision and organize the new major,” Stan Sclaroff, dean of Arts & Sciences and a professor of computer science, says African American and Black diaspora studies “taps an impressive range of talented, interdisciplinary faculty, who are scholars working at the leading edge of this exciting and important field of study.”

One of Chude-Sokei’s most enthusiastic colleagues is Saida Grundy, an assistant professor of sociology and African American studies, whose courses are always oversubscribed and whose class on race and ethnicity is so popular a second section has been added.

“Louis has built that program from a cottage to a tower,” says Grundy.

Keanna Goddard (CAS’25), who has a double major, in philosophy and psychology, and a minor in African American studies, says she and a group of other students learned about the new major a few weeks ago over dinner at the AFAM House with Chude-Sokei and Mary Anne Boelcskevy, who is the program’s director of undergraduate studies and a senior lecturer, master level. “I was, like, ‘Yes!’” says Goddard.

Goddard, who plans to pursue a career in law, says she’ll declare African American and Black diaspora studies as her second major, in addition to philosophy in the fall. “I’m really interested in law and critical race theory and how the two are intertwined and how that affects people,” she says. “When it comes to learning about African American studies, it’s not just history—it ties into culture and how race plays a part in politics. You can never have that conversation and be done with it. People’s views are always changing.’’

The African American studies classes she’s taken at BU “have definitely opened my eyes to different points of view,” Goddard says. “If I’m sitting in a classroom with 10 other people who all have different views, I’ll come out of it with, wow, I never thought of it like that. It makes me want to do more research.”

A’yanna Rouse (CAS’25) is minoring in African American studies, with a major in computer science. She says she views the new major as “another step toward inclusion” and diversity at BU. “People are more open to speaking about the history of America now—the history of oppressed minorities, who was part of it, who did what to whom.”

Chude-Sokei says the African American Studies Program has secured the funding for community internships for students majoring in African American and Black diaspora studies. For example, two faculty affiliates—Spencer Piston, a CAS associate professor of political science, and Michael Birenbaum-Quintero, a College of Fine Arts associate professor of music—are working with the city of Lynn on police reform and AFAM is building a related internship for students.

“That’s a model that we hope to expand beyond Lynn,” says Chude-Sokei. He adds that he and his colleagues also hope to add more international travel for students. The program currently offers an annual trip to Cuba to study the African diaspora in Latin America.

There is no singular definition of antiracism or a singular, homogenous Black community…. What you learn in my class…and what I foment in our program is the range of diverse and sometimes conflictual perspectives on race and Black experiences on planet Earth.

Chude-Sokei says that with the quality and skyrocketing number of applications to the graduate program that Adelaide Cromwell started more than a half century ago, he and other faculty also hope to expand the graduate program. “We’re trying to build on that history,” he says.

“There are so many ways to answer that question,” says Chude-Sokei. “The most obvious is that African American studies, from the late ’60s to the present, has argued that race, gender, and sexuality would be the primary way of understanding and organizing knowledge and culture. And the rest of the world has come to finally catch up to that assertion. Organizing knowledge and culture around race can be problematic, but we show how it can also be liberatory because it’s about negotiating human and political differences.

“African American studies has been the space where ideas, research, arguments, and experiences around race have been collated,” he adds. “It’s rooted in the broad, diverse histories of multiple thinkers, writers, and sometimes opposing perspectives of writers, art makers, culture makers, activists, and political thinkers across the entire Black diaspora.”

In BU’s African American Studies Program, “there is no singular definition of antiracism,” Chude-Sokei says, “or a singular, homogenous Black community. There are multiple Black intellectual positions and communities from past centuries to the present, not all of which agree with each other. What you learn in my class [Black Thought], for example, and what I foment in our program is the range of diverse and sometimes conflictual perspectives on race and Black experiences on planet Earth.”