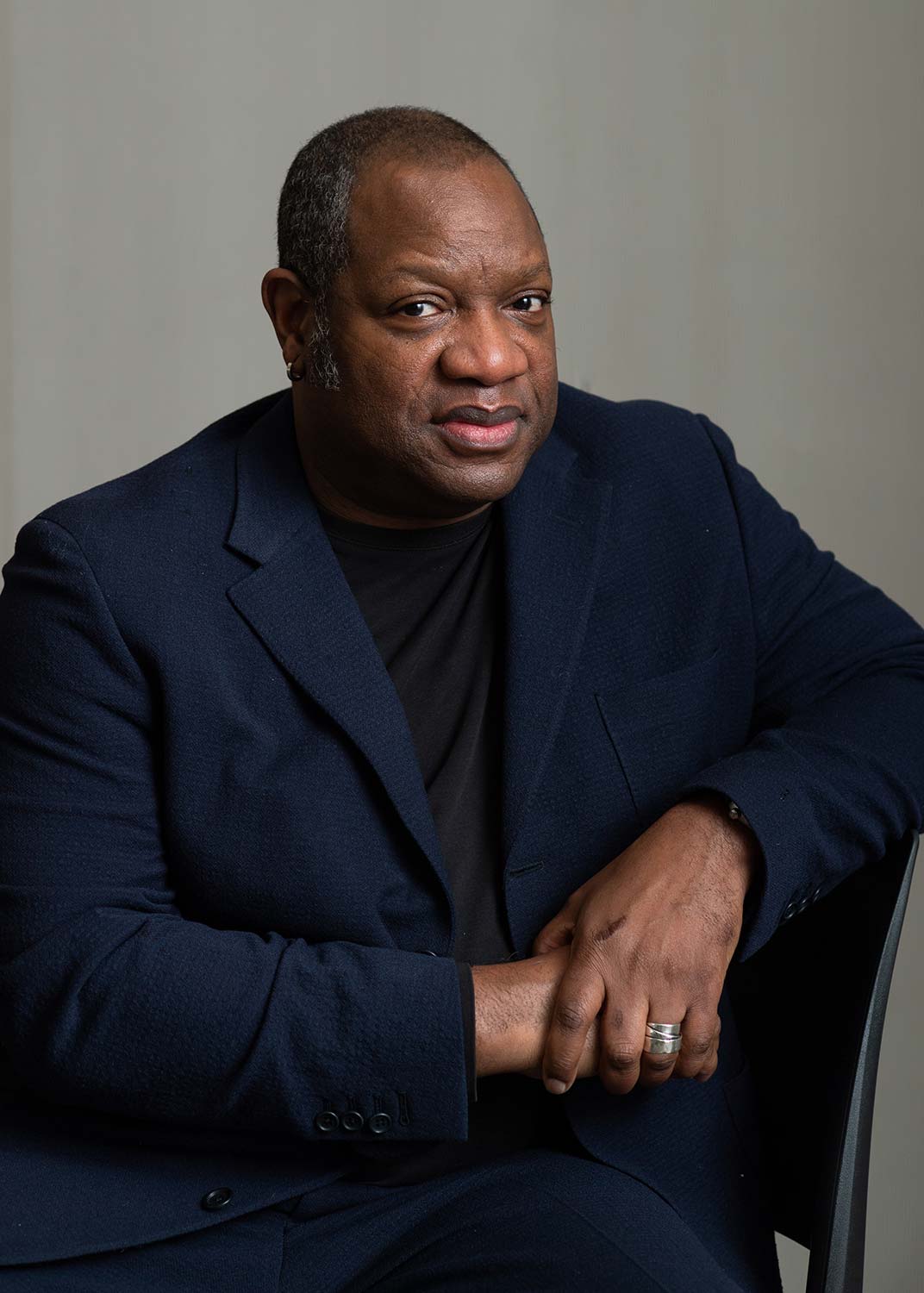 Louis Chude-Sokei’s Nigerian father helped lead the Biafra rebellion and was killed fighting for that short-lived country in 1968, before his son turned two. His Jamaican mother set up hospitals for the wounded and airlifts for starving Biafran children. By the time Chude-Sokei was a teenager, he’d moved from a refugee camp in Gabon to a strict religious home for “left behind” children in Jamaica to the gang-ridden Los Angeles neighborhood where he and his mother eventually settled. There he lived amongst the vibrant African diaspora of his extended family—all the while hearing people tell stories of his parents, “the JFK and Jackie O of Biafra.”

Growing up, he secretly read David Copperfield and other British Victorian novels in Jamaica, became a devoted fan of David Bowie, and got good enough at football—a game he didn’t even like—to make his high school football team so he could avoid the violence of his neighborhood.

“This is the story of a young Black man trying to find himself in a world where he never quite seems to belong,” Ijeoma Oluo writes in the New York Times Book Review. The author is “too African for Jamaica, too Jamaican for America, too American for Nigeria,” Oluo writes.

Chude-Sokei is also editor-in-chief of The Black Scholar, ranked by Princeton as the top journal of Black studies in the United States, and an expert on the literature and music of the Black diaspora and the relationship between race and technology, from robotics to artificial intelligence, among many other subjects.

BU Today talked with him about Floating, which owes its title to a David Bowie lyric, and how in writing it he set out to reconcile the “multiple Blacknesses” of his life—Igbo, African, Jamaican, Black American—and to challenge readers to see beyond the conventional narrative of Black/white in America.

BU Today: What have you been told about your father?

Chude-Sokei: Very charismatic. Good-looking, tall—really tall. Myth and romance make everyone tall. He was the titular head of the family clan and supposed to marry an Igbo woman from a titled clan. My mother, however, came from this Jamaican lower middle-class family, where she’d been taught that Africans were primitive. Yet she married an African, six weeks after they met in colonial London. And moved with him to Nigeria.

BU Today: What was your sense of yourself at Jamaica’s Seventh Day Adventist Home for children, where you lived from about age four to nine, when you joined your mother in Washington, D.C.?

Chude-Sokei: My goal was to be just like a Jamaican kid. Though Jamaican kids all wanted to be like African Americans we’d see on TV.

BU Today: You write that when your mother was at work you would dig into her boxes stuffed with newspaper clippings about Biafra and the war and photos of your father and your godfather, who was the president of Biafra. Was that sort of like your first archives?

Chude-Sokei: Absolutely. She worked multiple jobs as a nurse at different hospitals, and didn’t talk about the Biafra war, or the genocide. I started looking through all the boxes in the apartment trying to figure out—what is all this stuff? And I’d pull out a magazine with my godfather on the cover. Or a photo of my dad! And clippings about the plight of the Igbos and pictures of emaciated kids.

BU Today: How were you starting to form your identity as a boy in Washington, D.C.?

Chude-Sokei: In the same way I did in Jamaica. What’s the Blackness here? As I tell in the book, that’s when I discovered the American skin color thing by being called the “n-word” by a white kid. I didn’t know what it meant. I don’t think he knew what it meant, either, other than it’s something you say to a Black kid to make him angry. I also got insulted by an African American teacher who said Africans are an embarrassment to “real” Black people because of the post-colonial violence on the continent.

That was a moment of realizing that American racial differences are very different from what I’d known. In Jamaica there is awareness of racism and colonialism, but it’s more abstract because everybody is Black. People in positions of authority are Black, same thing in West Africa. When you come to America, you feel minority status. That status and its implications are what I began to learn.

Because I was always surrounded by immigrants, it was hard to be subsumed into the American Black/white narrative. They may have gotten on my nerves, but you could never get away from the African diaspora. Folks would sit around and drink beer and eat curry goat and there’d be the Yoruba, and the Igbo and the Jamaicans and the Trinidadians and Haitians and South Africans. It was not academic, nor was it politically correct. A lot of them thought racism was simply Black Americans complaining about America, a country these immigrants almost died trying to reach. They’re like, we just survived a genocide! Trying to argue with them about systemic or structural racism was indeed a challenge.

We know that America by 2050 or so is going to be browner and less white. Well, Black America is going to be less traditionally Black because of Black immigrants, more of whom have arrived here over the last few decades than during the slave trade.

BU Today: Your mother tells you that you first heard David Bowie in the refugee camp in Gabon. What was it about Bowie that so mesmerized you?

Chude-Sokei: It’s easy now to talk about the metaphoric alien that refuses to assimilate, or the Spaceman who decides it’s better to float than come down. But these meanings came from growing up in a Seventh Day Adventist House in Jamaica where reggae was forbidden because it was Rasta or secular. We could only listen to gospel and country and western, which is popular in Jamaica. We couldn’t listen to pop music, except when the girls would sneak in a radio and listen to the Jackson Five. But imagine if that’s your musical universe. Then you hear Bowie. To discover that much of what he was singing was essentially science fiction bolstered my interest in that genre.

BU Today: Can you talk about that big turning point in high school, when you let a bunch of your neighborhood friends into the gym one night, unlocked the storage room, and they stole sports equipment? You didn’t take anything, but you were all caught and faced a disciplinary hearing.

Chude-Sokei: One of many turning points. I’d also been a victim of serious violence. Friends were jailed or shot. There was a time when it was about fists and knives, but then guns began to show up. I was kicked off the football team and shunned by all the cool guys because the assumption was that I was a snitch.

That’s when I started hanging out with the nerdy kids. Some white, some not. But the white ones all loved Bowie. And were shocked by this Black kid with impeccable sports and thug credentials listening to Bowie and obsessed with sci-fi.

That period is also when I discovered, behind the gym, the college guidance counselor’s office. I was trying to figure out what’s next. I didn’t want to get killed. I didn’t want to go to jail. And I wanted to placate my immigrant family. College was the answer.

BU Today: What do you hope people take away from your story?

Chude-Sokei: That this is also a book about the complexities of race and racism, not the simplistic binary that is currently dominant. It is safer to reduce race to a Black-and-white debate, when there are so many other nuances and ethnic groups at work at the same time.

This is a story of someone who’s navigated that, internationally and nationally, for his whole life. When I got to college, I was already interested in this thing called diaspora, which you can’t talk about without talking about colonialism and racism, but also immigration. Of course, while learning about this, the cops are harassing my friends and me all the time. We would be pulled over and thrown into gutters, with them stepping on our backs or tossing us in jail overnight only to release us with no charges. That came from being a Black American kid around South Central LA. But amidst all of this, there is still xenophobia within the African American social world and a privileging of African American experiences over other Black or immigrant struggles.

The book is also the story of someone who knows that American notions of race and ethnicity are changing. We know that America by 2050 or so is going to be browner and less white. Well, Black America is going to be less traditionally Black because of Black immigrants, more of whom have arrived here over the last few decades than during the slave trade. Black people with different experiences of race and racism are changing the dynamics, and that is one of the most important facts about Black America today in my estimation.

As the director of African American Studies and editor of The Black Scholar—one treats American Blackness with respect and acknowledgment, because it is intellectual and politically essential to all Black thought and experiences. But at the same time, one is something else. That something else still awaits a full emergence. That’s what this book is trying to signal.

In this BU Center for the Humanities podcast, Caryl Phillips, a Yale University Professor of English, interviews Louis Chude-Sokei about Floating in a Most Peculiar Way.