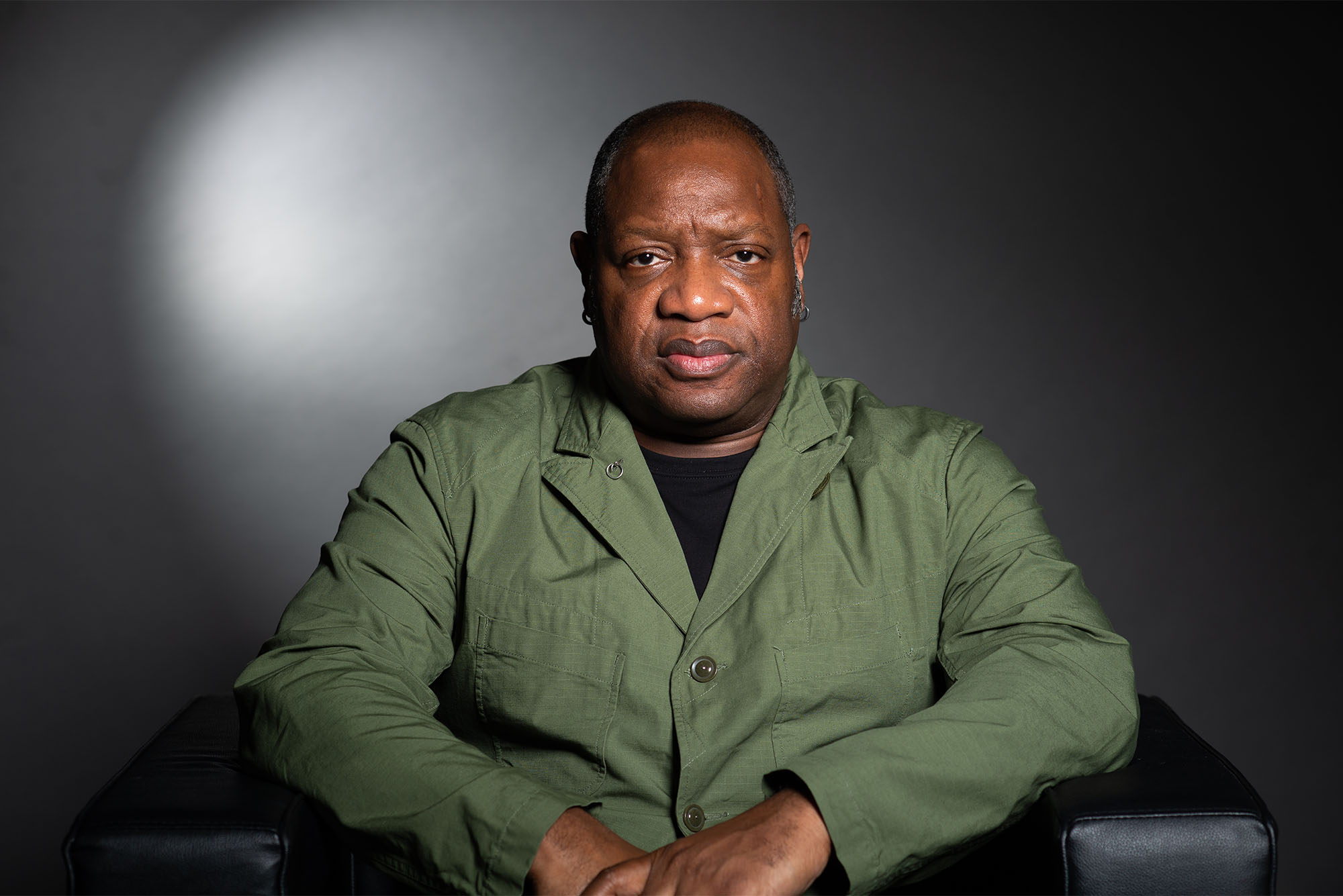 Louis Chude-Sokei, director of the African American Studies Program, George and Joyce Wein Chair in African American Studies, and a College of Arts & Sciences professor of English, will deliver the annual University Lecture, titled “Beneath and Beyond Human: Race and Technology Between Singularities,” Wednesday, March 23, at 7 pm, at the Tsai Performance Center. Photo by Cydney Scott

When Louis Chude-Sokei speaks about race and technology—the subject of the annual University Lecture he’ll deliver Wednesday night at the Tsai Performance Center—you can be sure he’s not talking to techies.

That is, unless they want to learn about the roots of AI and digital media in slavery and industrialization, the racial origins of the word robot, the DIY genius of cybercrime fraudsters working from Nigeria’s internet cafes—and how one scholar began connecting music, science fiction, race, and technology as a young immigrant navigating the African diaspora in Nigeria, Jamaica, and the United States.

Chude Sokei, the director of BU’s African American Studies Program, the George and Joyce Wein Chair in African American Studies, and a College of Arts & Sciences professor of English, has spent much of his academic career challenging conventional narratives about literature, culture, and the Black diaspora and the relationship between race and technology. His books include The Last Darky: Bert Williams, Black on Black Minstrelsy and the African Diaspora (Duke University Press, 2006), The Sound of Culture: Diaspora and Black Technopoetics (Wesleyan University Press, 2016), and his coming-of-age memoir, Floating in a Most Peculiar Way (Houghton Mifflin Harcourt, 2021), which recounts his journey from the former nation of Biafra to a refugee camp in Gabon to Jamaica to South Central Los Angeles, where he spent his adolescence navigating the multiple Blacknesses of the African diaspora in America.

He is also editor-in-chief of The Black Scholar, one of the leading journals of Black studies in the United States, and has collaborated with a number of artists, performers, and programmers on projects focused on sound, music, and technology. For example, he recently worked with the iconic Berlin electronic artists Mouse on Mars to produce the AI-powered album Anarchic Artificial Intelligence (Thrill Jockey Records 2021). In addition, he is the lead artist/curator of a yearlong sound art experiment in Nuremberg, Germany, focused on Nazi Party historical sites, which netted him the Kulturstiftun Des Bundes Award from the German Federal Cultural Foundation, and he is a curator of Carnegie Hall’s 2022 Afrofuturism Festival, which runs through March.

BU Today caught up with Chude-Sokei recently to talk with him about the upcoming University Lecture, “Beneath and Beyond Human: Race and Technology Between Singularities,” and how he hopes to challenge his audience to think about race and technology in new ways.

BU Today: We know you don’t want to give away too much, but can you tell us a little about what you’ll be talking about?

Louis Chude-Sokei: It’s not a lecture aimed at techies. I’m not a techie, I’m a humanist, a writer and scholar. It’s aimed at a broader audience, which is why I plan to tell a series of stories about how race and technology have shaped who we are and are shaping what we are becoming.

What are the connections between race and technology that go all the way back to the origins of our modern world? Stories about that. Stories also about someone [himself] whose interest in science fiction and music leads him to discover the interactions between race and technology, and how in studying those interactions, finds that the origins of AI and much of contemporary technology is rooted in the coinciding historical factors of slavery, industrialization, and colonial expansion.

Overall, I want to tell a story about how technology has developed and continues to develop in relation to race, culture, human difference, and the very question about what it is to be human—that’s the question that links the humanities with contemporary technology.

I may be a scholar, but everything I do at this stage is narrated as a story. Most of my peers who study race and technology, when they look at AI and algorithms and facial recognition technology for example, tend to reduce it all to just racism. I’m pointing out that there is far more than that. For example, the questions we’ve been asking about robots or AI—are these things human, can they think, do they have consciousness—there is a reason why they replicate the same questions that were asked about African slaves in the 19th century: are they human, do they have intelligence? Do they have souls? And how will we make sense of new technologies when they supposedly begin to operate, if not think for themselves?

And if you look closely at the history, the people writing and studying technology have always made these parallels between Africans and machines, race, and technology.

BU Today: Can you give some examples?

Louis Chude-Sokei: As I’ve written about many times, the first use of the word robot was in 1921, by the writer Karel Capek, in a play called Rossum’s Universal Robots. The word was actually created by his brother, who would be murdered by Nazis in a concentration camp. Robot means coerced labor in Czech, which when translated means slave. Capek was also obsessed with Jim Crow America.

BU Today: It seems like the fact that you’re not a techie somehow frees you up to make all these connections that other people miss.

Louis Chude-Sokei: I’m doing this work because I’m not a techie. Techies often rely on the fact that we don’t understand what they do. Critical race theorists tend to do the same thing. But I’m trying to find a new approach to talking about race and technology that’s not for techies and not explicitly for people who do critical race theory. I’m coming from both those places, but I’m putting together a narrative via publicly accessible stories.

I also don’t want to reduce thinking about race and technology just to racism. All my intimacy with machines comes out of my obsession with sound recording and digital sound design and music. That’s why in my parallel career I don’t make music, I work with sound itself. But music and sound are precisely how Blacks have always engaged technological reproduction.

When I was growing up, it seemed that although people were describing the “digital divide” as something that was inhibiting Black people from getting access to technology, I was in a culture where boys, and sometimes girls, too, were obsessed with knobs and buttons and cables and speakers and synthesizers and samplers. We were obsessed with reggae and hip-hop and techno and bedroom production and science fiction–themed sounds. But what we were actually doing was coding and programming. I mean, these young Black folks would eventually reshape hardware and software in order to do new things with sound that these machines were not made to do. Repurposing technology has always been a very Black thing. Those changes that were made by young Black people would be then picked up by the makers of those instruments and software, who would restructure their products to appeal to this new sensibility. It seemed to me that we weren’t isolated from technology—we were engaged with it. It was just being disguised or dismissed as “music.”

And the same thing would happen when I would travel in Nigeria. The largest history of cybercrime is in West Africa, where none of these people had their own computers. The whole African world and how it engages with machines and technology is another history of technology and informatics, from music and piracy to increasingly legitimate engagements. Think about the fact that the number of Black engineers and the Black IT world are overwhelmingly Nigerian immigrants and Africans. No one points that out. The largest percentage of Black women involved in AI are African. There are so many more stories about race and technology that we miss by simply declaring tech as racist and sexist. But even these stories are secondary to what I’m talking about tonight. They just enable me to paint a picture of where we are going, where race will shape technology in non-technological ways.

The annual University Lecture, “Beneath and Beyond Human: Race and Technology Between Singularities,” is Wednesday, March 23, at 7 pm, at the Tsai Performance Center, 685 Commonwealth Ave. Admission is free, and the public is invited. Find more information and register here. Note: the University Lecture will be hosted under the current BU health protocols. While not formally required for public events on campus, all attendees are strongly encouraged to have been vaccinated for COVID-19.