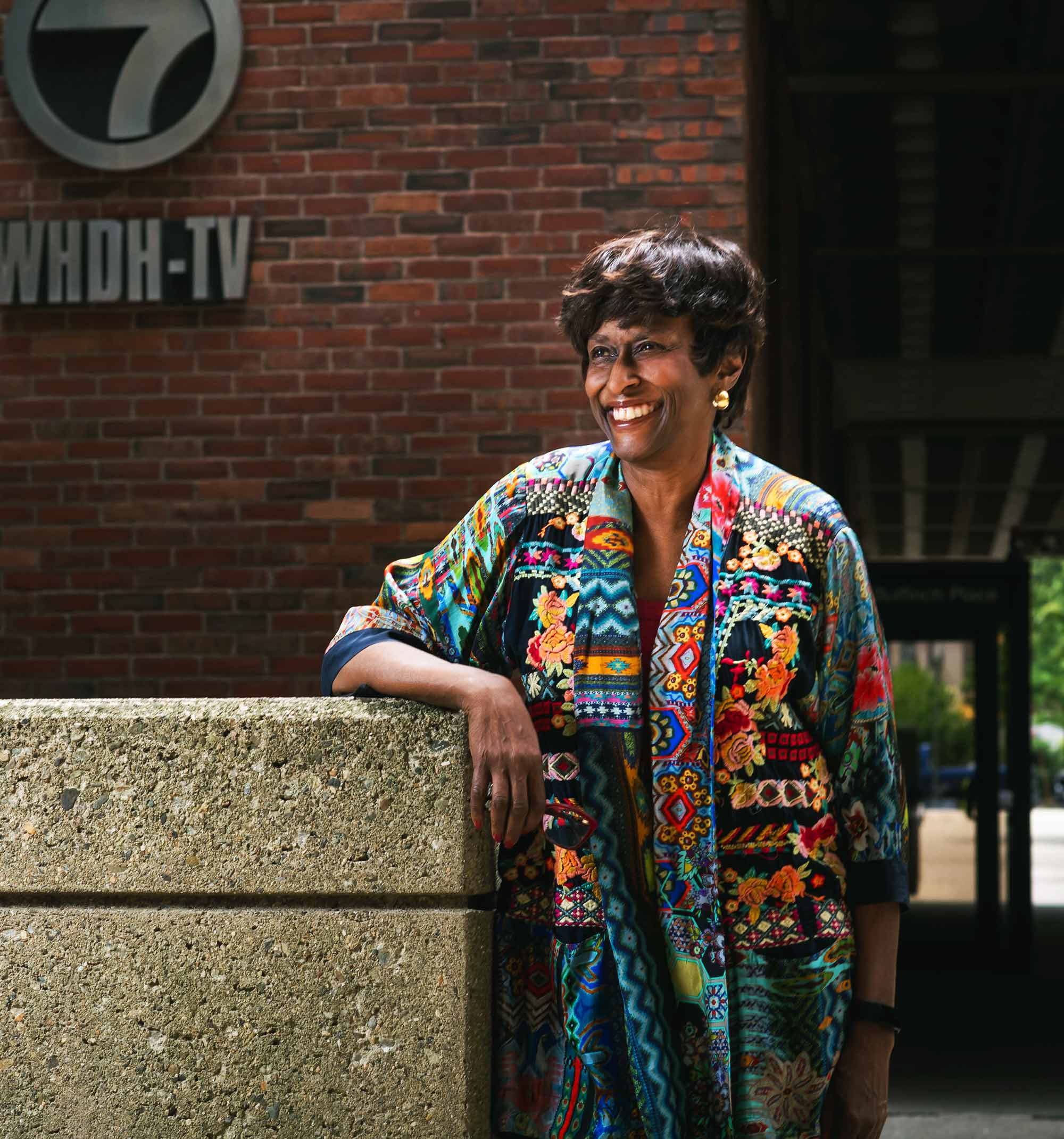 Carmen Fields was in the vanguard of Black women journalists who propelled the long, slow struggle to diversify America’s newsrooms, and in the process, change how communities of color are reported on and seen. In 1973, she became one of only two female Black reporters in a Boston Globe newsroom dominated by white men. Fields (COM’73) was on the Globe team that won a Pulitzer Prize for its coverage of the bitter racial divide over court-ordered busing to desegregate the city’s schools in 1975. She went on to win awards and acclaim as a local television reporter and coanchor and was selected for a Nieman Fellowship at Harvard University, a program for accomplished and promising journalists. For the past 24 years she’s hosted and produced the long-running monthly WHDH-TV Channel 7 public affairs show Higher Ground.

The 100th anniversary of the 1921 Tulsa race massacre last spring brought renewed attention to one of her crowning journalistic achievements—the 1993 PBS American Experience documentary Going Back to T-Town. Fields, who grew up in a segregated Tulsa in the 1960s, wrote the script for the film, which documents how Tulsa’s segregated Greenwood community had prospered until 1921, when it became the target of one of the nation’s most lethal race massacres, and how it eventually rebuilt.

Bostonia sat down with Fields, who serves on BU’s Black Alumni Leadership Council, to talk about the barriers she broke and the mentors she had.

Bostonia: You’ve described the vibrant, segregated community you grew up in and how important that was in shaping you and giving you the confidence to go out into the larger world. Can you talk more about that?

Carmen Fields: I think part of the advantage of that era is the fact that the teachers and the other role models lived in your same community. So you would see them in the supermarket, at church, at the bus stop, or wherever your life took you. And all of these people were like your parents. I think someone said in the T-Town documentary that we had the uppers, the middles, and the lowers—we were all just kind of there together. And so that gives a context that I think is missing in today’s society. My very real experience was of a nurturing and encouraging community. They cheer you on when you give your Easter speech at church or at the Christmas Pageant. They made you feel like you can do it.

My mother [Bernice Copeland Fields] taught third grade and later on became a reading specialist. Her motto was, “If you can read, you can do anything,” and that meant reading anything from a recipe to an instruction manual to a history book.

Reading was the font of knowledge and accomplishment. We were very familiar with the library. I can remember when they built a big, citywide library downtown and we were able to go to that. That was a big deal. Any time my mother said, “Entertain yourself,” reading was the go-to activity.

Bostonia: You’ve mentioned that your seventh grade English teacher was the person who introduced you to journalism.

Carmen Fields: Juanita Lewis, who later married and was Juanita Hopkins. For part of the school year, she had a unit on journalism. And we would take turns writing up the school news and submitting it to the Oklahoma Eagle [Tulsa’s Black newspaper]. That was my first experience with seeing my stuff in print, and feeling affirmed in some seventh-grade kind of way. That really opened my eyes to this field of journalism.

When I was a senior in high school, Jeanne Goodwin, who wrote a column for the Eagle—her family still runs the Eagle today—invited me to write a couple of columns while she was away on vacation. That was an important opportunity.

Bostonia: You majored in journalism at Lincoln University, in Missouri, one of the nation’s historically Black colleges and universities. What was that like?

Carmen Fields: It was a fabulous experience, and I’d recommend it for every student of color. It was so affirming to see African American PhDs everywhere. They were your teachers, the heads of the departments, the president of the university, the head librarian. The head of the music department, who was also the choirmaster—I was in the choir—was Oscar Anderson Fuller, and he was the first African American in the United States to get a PhD in music. Dr. Lorenzo Green, who was the head of the history department, was a close friend and colleague of [pioneering Black historian] Carter Woodson, who started the Association for the Study of African American Life and History, and out of that grew Black History Week, which is now Black History Month.

Bostonia: When you were accepted to BU’s broadcast journalism program in the early 1970s, were you aware of Boston’s reputation as a city that was hostile to Black people? And what was your experience as a Black student at BU?

Carmen Fields: I had no sense of Boston’s reputation whatsoever. And what was shocking for me was that for the first time in my entire life, I was the only person of color in the classroom. It was very intimidating to me. It was very lonely. I think the first semester was probably the worst three months of my life. I kept thinking, what am I doing here? I reminded myself of the importance of education, and the importance of representing.

There were two things that helped smooth over that time for me. I had a high school classmate who was married to a brother who was in the School of Law. She was working as something like a dorm mother. They had an apartment on the BU campus over on Bay State Road, and she had a little budget to host dinners there. And so we would help her cook and set up the room and serve. Afterward, we would have the leftovers. There was a sense of normalcy and friendship there. I also sought out, and affiliated with, the graduate chapter of my sorority, Alpha Kappa Alpha [the sorority that Vice President Kamala Harris joined as a Howard University student]. And that introduced me to a wider Black community that was very nourishing and nurturing at that time.

Bostonia: When did you feel like, “Okay I belong here, at BU?”

I don’t know that I ever did. It was just all about getting the grades and finishing and then looking for a job. I was very conscious of not wanting to be a burden on my family. That was the purpose—to find a job, and what did they say in the movie Shawshank Redemption—”Get busy living or get busy dying”?

Bostonia: Who were your mentors?

Sarah-Ann Shaw, who was the first Black on-air reporter at Channel 4 WBZ-TV. She was like my journalistic godmother. And she was good about calling me and saying, “How you doing? I was at this meeting—it’s not much of a television story. But you may want to call so-and-so of this coalition, and see if you can do something in the Globe.”

I learned from another mentor: a Christian Science Monitor reporter, Luix Overbea, [the second Black reporter hired at the Monitor and a cofounder of the National Association of Black Journalists]. He had worked for the Oklahoma Eagle in Tulsa. One time when I was having trouble with some kind of story, he said, “Never tell them [your editors] you can’t find the story. You find some story!”  That’s such great advice. You know, you come back with some kind of a story—and that was my mission and my motto.

Bostonia: From what you knew and saw and reported in the 1970s battles over busing, what was it about Black moms and dads that made them keep sending their kids to Boston schools in the face of all that hatred and danger?

I can’t emphasize or overemphasize the importance Black people have placed on education since slavery days, when we weren’t supposed to learn how to read and write. And that same spirit was infused in a lot of the Black parents, and the educators of [the 1970s], as well.

Bostonia: Considering where you came from and what you had to put up with along the way, how do you feel looking back at what you’ve accomplished?

For a kid from Tulsa, Okla., in a town like Boston that was hostile and unfriendly to people of color, I’ve had few complaints. I won’t say no complaints. I’ve had my byline on the front page of the Boston Globe. I’ve had the lead story and live shots and all on television. And now I’m producing my own monthly public affairs show. Not bad.