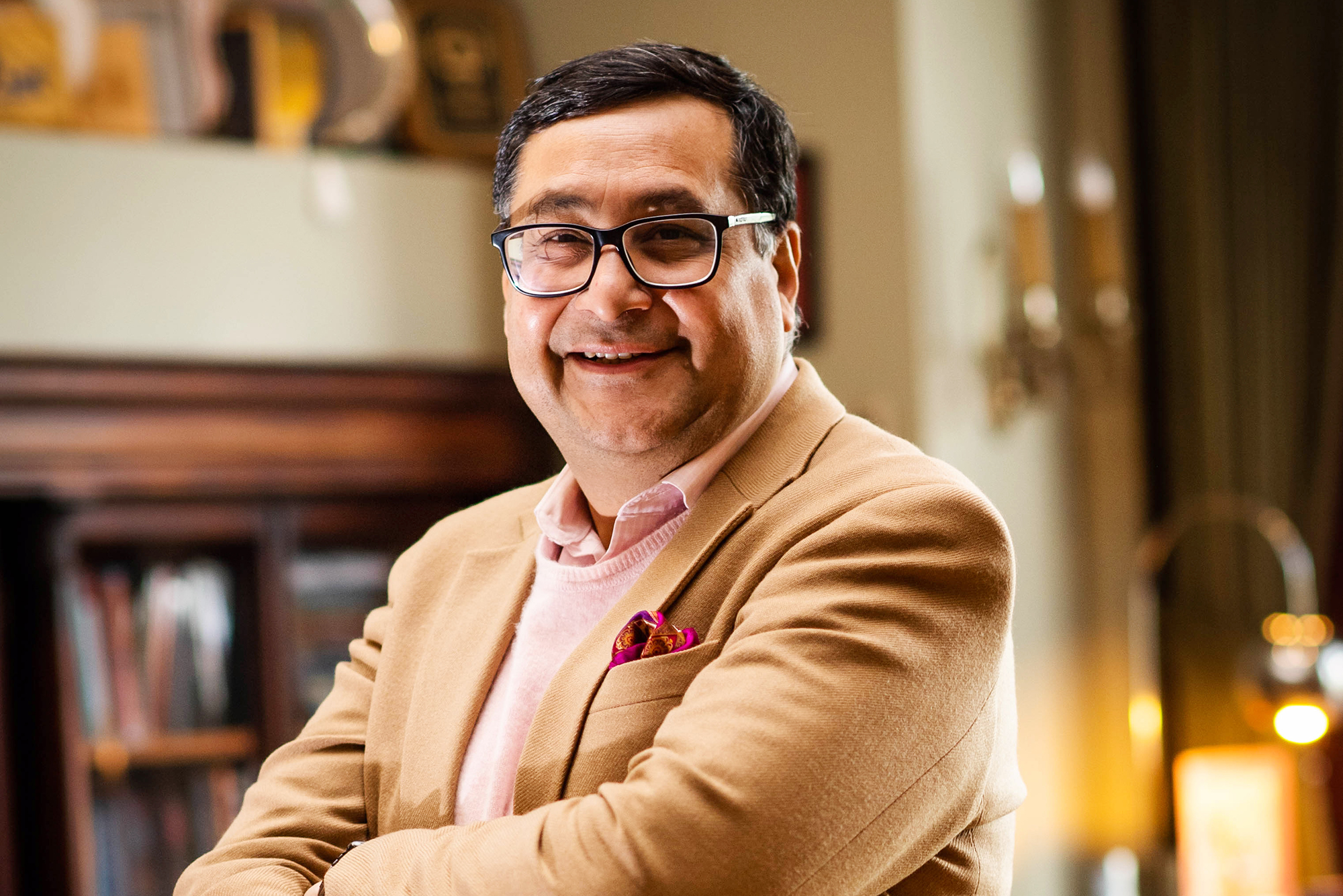 After he steps down as dean of BU’s Frederick S. Pardee School of Global Studies, Adil Najam will return to his main focus as a widely recognized scholar of global climate change policy in developing countries.

Adil Najam Leaving Post as Pardee Dean Next May

One unexpected impact of climate change: Adil Najam is stepping down as the inaugural dean of the Frederick S. Pardee School of Global Studies at the end of this academic year.

OK, environmental upheaval isn’t the only reason, maybe not even the main one. By then he will have held the dean’s post for eight years, and Pardee is thriving, which means he’s done the job he set out to do. And he’d like to devote more of his energies to the classroom.

But global climate policy is a main focus of Najam’s research, and it has an urgency about it these days.

“In many ways, it is a bad time for the environment, but it’s a good time to do something about it,” Najam says. “The amount of attention it has now is off the charts. The urge to contribute to that moment is there, when you can hope you will have an impact because the political and social noise is there, the scientific urgency is there. So you say, ‘It’s time to roll up my sleeves and do my bit too.’”

Najam, a lead author of the Third and Fourth Assessments of the Intergovernmental Panel on Climate Change, which garnered the 2007 Nobel Peace Prize for advancing public understanding of climate change for its scientific panel, is a widely recognized scholar of global climate change policy in developing countries.

Even setting aside climate change, Najam is eager to set down his administrative duties and—after a sabbatical—return to research and teaching full-time. “I’ve always insisted that what gives me the kicks is really the classroom and the research, and I want to get back there before I have to be dragged out,” he says with a smile.

A College of Arts & Sciences professor of international relations and of earth and environment, he first joined BU in 1997 and was named inaugural director of the Pardee School in 2014. He was director of BU’s Frederick S. Pardee Center for the Study of the Longer-Range Future from 2007 through 2011.

Frederick S. Pardee (Questrom’54,’54, Hon.’06) donated $25 million in 2013 to endow the Pardee School of Global Studies. Today, the school, headquartered at 121 Bay State Road, has 40 full-time or affiliated faculty members, more than 900 undergrad and graduate students, five undergraduate majors and eight minors, and several graduate programs. Undergrads can study international relations, Latin American studies, or Muslim societies/Muslim cultures, among others, while graduate programs include a master’s in global policy and dual degree programs matching an MA in international relations with a law degree from the School of Law or an MBA from the Questrom School of Business.

“As the global nature of its mission grows more consequential with each passing day, the school’s future grows correspondingly brighter,” Jean Morrison, University provost and chief academic officer, wrote in a letter to the University community announcing Najam’s decision. “Professor Najam has been a vital part of that, and we thank him for his leadership.

“He has been a community builder,” she said, “whose focus on policy leadership, intellectual rigor, and collaborative partnerships has helped the Pardee School produce highly relevant research and programming that advance its core mission of improving the human condition.”

Najam says the school built on existing strengths at BU, such as international security and diplomacy. And it has developed a deep expertise in issues of the global south, or developing countries, and growing areas of study in gender and justice.

“We consciously said we have to span the globe. You can’t have a person on every country, but certainly on every continent and every region,” Najam says.

And in each area, Pardee’s expertise spans both traditional and new approaches, adding issues like the environment and migration, broadening the usual geopolitical concerns beyond military and diplomacy. “If you think about how we talk about security, for example, we have Jack Weinstein [a professor of the practice of international security and a former Air Force lieutenant general] to people like Jessica Stern, [a research professor] who is working on war and terrorism, to people, like myself, who work on human security—water insecurity, climate insecurity, COVID. This morning I was giving a talk [remotely] to the National War College on climate insecurity.”

What gives me the kicks is really the classroom and the research, and I want to get back there before I have to be dragged out.

This is a necessary approach for a 21st-century school of international relations that wants to take on the world’s great problems, he says, which tend to have three characteristics—they’re global, they’re long-term, and they’re interdisciplinary.

“It is a good time for the school,” Najam says. “I think it is in a good place for new leadership to take it to the next step. My job was to create something.

“Before you know it, you blink your eyes and it’s eight years down and the school is established, and we are recognized across campus,” he says. “People no longer ask what Pardee is or confuse us with someone else. And our faculty is fantastic, so outside there is much greater recognition that Boston University has a school of international affairs. People think we are much older than we are!”

A national search is planned to find the next dean, and several faculty members will be named soon to a search advisory committee. It’s hoped the committee will conclude its work by April 2022, with a new dean appointed soon after.

“It is a good time for someone new to come in,” Najam says. “We are doing well financially and in the quality of students, and in some ways not entirely planned. The hope is that, by the time I step down, the dark clouds of COVID are behind us. That would be a good time for a regeneration. So it is a good time to hand the baton to the next person.”

Adil Najam Leaving Post as Pardee Dean Next May