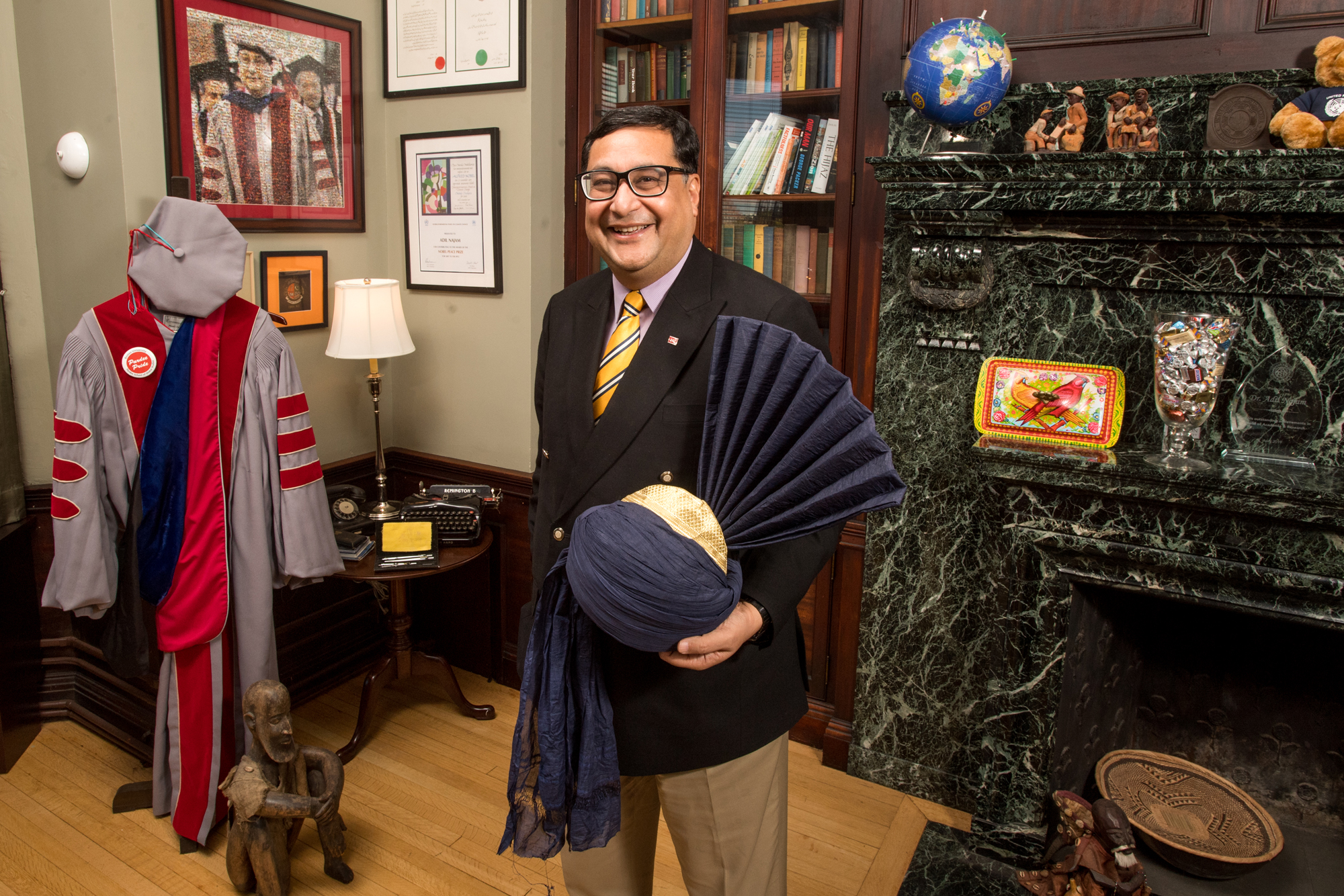 Click on the circles above to see more of what Dean Adil Najam displays in his office at the Pardee School.

A renowned expert on global public policy and diplomacy, Adil Najam’s office on Bay State Road is a small museum of curiosities and conversation pieces. There’s a majestic Punjabi kulla cap on a table, sunbaked South African sculptures on a mantle, and a painting of Nairobi women at work purchased from a street artist in Kenya.

“It has no art value, but to me it has value,” Najam says of the painting, mounted on the wall across from his desk. “It’s so real in terms of depicting ordinary people’s ordinary lives.”

The inaugural dean of the Frederick S. Pardee School of Global Studies and a College of Arts & Sciences professor of international relations and earth and environment, Najam’s office reveals as much about his values as a scholar, intellectual, and humanitarian, as it does his travels.

On a paneled wall hangs what Najam calls his “Pseudo Nobel”—an award from the Intergovernmental Panel on Climate Change recognizing his lead authorship of work that helped the organization win the 2007 Nobel Peace Prize for its “efforts to build up and disseminate greater knowledge about man-made climate change.”

Displayed on a nearby table is the compass and protractor kit he used as an undergraduate student at the University of Engineering and Technology in Lahore, Pakistan. The shiny tools were among his most expensive possessions as a student, he says.

Many other objects on display are gifts from family and friends who know about his appreciation for earthy and colorful Pakistani “truck art.” Others were acquired after intensive negotiations with street artists. Najam says he purchased a wooden sculpture of a sitting man in Senegal after lengthy negotiations with a vendor, noting that he enjoys such interactions and often leaves paying full price anyway.

“He’s done me a service, given me this thing,” Najam says of street vendors. “Plus he’s giving me a story and a conversation. … That means something.”

A rough-hewn collection of South African clay statues depicting a dentist’s visit and a shoe shine are among his favorite pieces. Najam says he likes the ordinariness of the scenes it captures, calling it “art that’s not trying to be art.”

“It’s stuff made for tourists,” Najam says. “And I have no shame in seeing the divine from the outside.”

In our series “Office Artifacts,” BU Today highlights interesting artifacts professors and staff display in their office. Have a suggestion about someone we should profile? Email amlaskow@bu.edu

There are 3 comments on Office Artifacts: Adil Najam