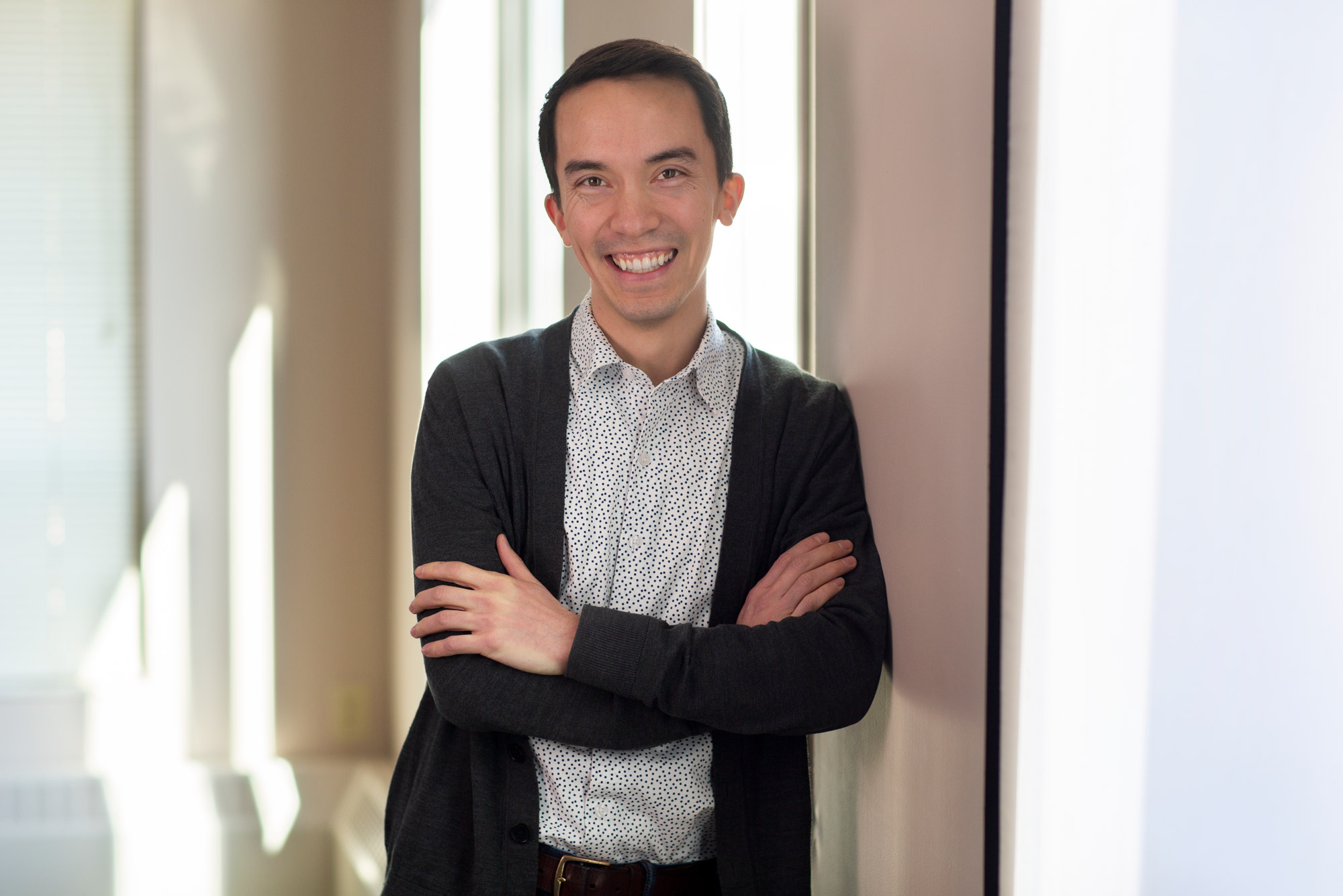 As a gay Asian American and an environmentalist, Tyler Sit (COM’11) started a Minneapolis church, ministering to a young and diverse congregation. Photo by rau+barber

They are Boston University alumni, faculty, and staff—of every race, ethnicity, age, and gender—and they are “Opening Doors” for the next generation.

It may sound odd, but biography and biodiversity inform Tyler Sit’s spirituality. “As a queer person of color who is living on this planet,” says Sit (COM’11), “when I wake up, I don’t get to choose if I’m Asian today, or whether I’m gay, or whether I breathe air. I am all of those things, all of the time, and I strive for justice in all of those areas because my survival depends on it.”

Biodiversity entered into it during his BU Study Abroad, as he relates in his upcoming book, tentatively titled Staying Awake: The Gospel for Changemakers, when he walked in the Amazon rain forest: “Monkeys swinging overhead, big footprints of giant anteaters, neon-rainbow lizards—that kind of thing. I had a spiritual experience in that rain forest, because I realized that living among difference is part of what it meant to be alive.”

He combines these commitments as founding pastor of Minneapolis’ New City Church, a United Methodist parish stressing social and environmental justice. Its weekly service, begun in 2017, draws almost 130 people. Its part-time staff of seven serves an overwhelmingly millennial and Gen Z congregation, Sit says, who mirror the racial demographics of the surrounding city. “On any given Sunday, about half of the people are part of the LGBTQ+ community, and about 40 percent of our community does not actively identify as Christian,” he says.

Bostonia talked to Sit about church planting to promote harmony among people, and between people and planet.

Bostonia: How did you get started in environmentalism and racial–LGBTQ+ justice? How hard was it for you to get your foot in the door?

Tyler Sit: One, there was discrimination within each of these movements that was not held accountable—[for example] racism in the LGBTQ+ rights movement—and two, social justice movements had to artificially construct categories for the sake of getting stuff done. In community organizing, things often boil down to a yes/no question: will the governor allow a pipeline to be built across indigenous land, or not? Will the public schools get funded, or not? Yes/no questions tend to render yes/no activism, which to a certain extent requires separated-out categories of people.

I am hopeful that our justice movements will continue to understand these intersections of identity more and more deeply as we move forward. In fact, that is part of the reason I started New City Church in the first place. We wanted to see if a multiethnic, LGBTQ-affirming church that does environmental justice work could meaningfully stick together through Christian practice. Fortunately, lots of people agreed!

When I was ordained, I made a list of mentors/teachers/best friends to thank for their support of me in my work. The list had over 100 names. The leaders of Marsh Chapel were some of those people, for sure, and the wonderful people at the Howard Thurman Center for Common Ground—two of the most underrated places at BU, in my opinion.

What are the more subtle forms of intolerance you’ve faced?

Asian Americans are at such a critical juncture of identity formation right now. While the Chinese Exclusion Act [of 1882, which banned Chinese immigrants to the United States for six decades], indentured servitude, and internment camps are not terrorizing Asian American lives as they were in previous generations—thanks almost entirely to community activism, mind you—we are leveraged as “model minorities” against other people of color, not as an affirmation of our accomplishment, but as a bludgeon to other groups. We are persistently seen as outsiders, assistants, and sidekicks who have conditional access to space depending on wealth and current events. Our clothing, food, and rituals are appropriated without recognition or hesitation.

I’m also an openly gay pastor in a denomination that does not currently ordain LGBTQ+ people, so there were certainly obstacles there.

New City would not be able to be the community it is without the concept of “centering marginalized voices.” We try to have our community be one where people who are not typically heard in broader society—people of color, queer people, undocumented people, etc.—can have their experiences and stories centered in our community. This gives people with dominant identities an opportunity to create space for these perspectives, which in itself is valuable for spiritual growth.

For example, it’s hard for a white agnostic person to attend church, but it is much harder for a Black, transgender agnostic person to attend church—period. And if we don’t acknowledge that different people had to take different levels of risks to be in the room, it will always privilege the people who are the most comfortable. This is one of the fatal flaws that “color-blindness” creates. As well intentioned as it is to say, “I don’t see you as Black or Latina or white, I see you as human,” it fails to name that if a woman is Black, or Latina, or white, she has had a very different experience in America than if she was not. The opposite of this denial is centering marginalized voices, and we try our best to do it every time we gather.

Can you talk about the current political climate for diversity?

In the end of the Bible, there is the word “apocalypse,” which means “revealing.” We are in an apocalyptic moment in America. White supremacy, which has always been a part of America, is coming out of the shadows. The spike in mass shootings, especially race-motivated mass shootings, is an outward manifestation of internalized hatred.

Our climate is contentious only because oppression has been “revealed,” and oppression is by definition a polarizing thing. I took a class with [Nobel Peace Prize laureate] Elie Wiesel (Hon.’74) while he taught at BU, and he was very clear that neutrality in the face of violence is an endorsement of the side that is committing the violence. The way we will heal as a country is not simply by kindness and decency, as helpful as those are, but by facing head-on the ways that some people are stepping on other people’s necks.

What I see at New City is that reconciliation is possible, if we risk confessing, transforming, and reconciling our wrongdoing. We can be honest and hopeful only if we are connected to a community committed to making things better.

What policies did you set to keep the church diverse, inclusive, and welcoming?

We can’t “think” our way out of racism. No amount of articles or trendy words will stop racism. Racism lives in the body as well as the mind, and in addition to reading articles we need to heal our bodies. An example is when a white member of our community is lovingly confronted for something they said or did that was racist, and they experience a full-body shutdown. Instead of staying engaged, they fall into a shame spiral, which takes them out of relationship. A lot of the antiracism training that we do at New City addresses this by training the body (and not just our minds) to stay engaged in relationship even when we are having big reactions.

Have you encountered any kind of resistance?

The greatest pushback is not from people who are conservative, but people who consider themselves progressive but haven’t let those beliefs deeply change them. For example, there are people, particularly white people, who visit New City Church, telling me, “I want to be a part of a diverse community.” Then, when we confront them about something that they did or said that negatively impacted a person of color, they push back hard. “But I didn’t mean to be racist!”

Anyone who steps into New City likely has good intentions and does not intend to be racist. However, intentions are different from impact, and we must be held accountable for our impact. Once our community members grasp this, they make leaps and bounds of progress.