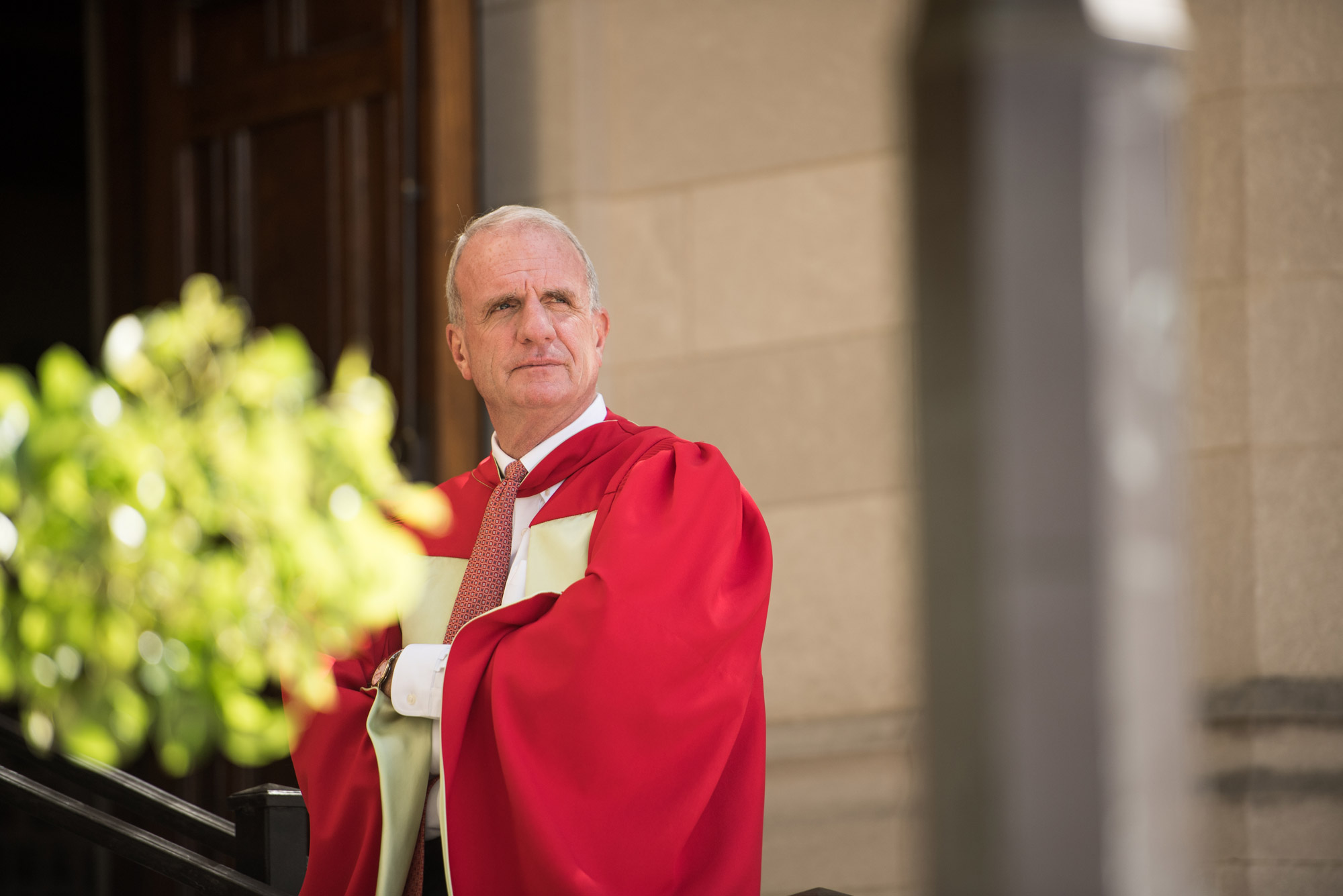 Marsh Chapel Dean Robert A. Hill says he would welcome a gay-accepting Methodist Church, but grieves about the possibility that the denomination may split in two this spring. Photo by Doug Levy

Marsh Chapel has been the venue for same-sex marriages for several years, its interdenominational status conferring autonomy from any particular church’s jurisdiction. But none of those weddings have been performed by its Methodist dean. The Rev. Robert Allan Hill personifies BU’s heritage (the University began as a Methodist seminary in 1839), but his church forbids its ministers to officiate at marriages for gay couples.

That will change for Hill if Methodists approve a plan to break with conservative congregations. The second largest Protestant denomination in the United States, with half of the world’s 13 million Methodists, will cleave in two if its global general conference approves the split when it convenes in Minneapolis May 5 to 15.

Under the plan, anti–gay marriage congregations would leave and form at least one new denomination, with the majority remaining in the newly gay-friendly United Methodist Church, marrying and ordaining gay people. Hill says he isn’t certain whether the 850 conference delegates will approve the plan.

But he is certain, as a School of Theology professor of New Testament and pastoral theology, that same-sex opponents “falsify” scripture.

“How many verses [in the Bible]? Thirty-three thousand. How many of those 33,000 deal with homosexuality? Six,” he says. “How many of those did Jesus speak about? None. The Bible is about love and freedom.” He also compares rights for gay worshippers to the early Christian church’s welcome of uncircumcised Gentiles despite their genital differences with the circumcised Jewish followers of Jesus—“and that’s a central story of the New Testament.”

STH, the country’s oldest United Methodist seminary, might be affected structurally by a schism, says Mary Elizabeth Moore, school dean. “We may have to decide how STH will align with the new structures. The mission will not change. The school will continue to offer rigorous theological studies, spiritual and professional formation, groundbreaking research, and contributions to faith communities,” she says, while continuing to “welcome all people and to build community that envisions and works toward the common good.”

Hill, a longtime supporter of LGBTQ rights, last year criticized the church’s decision to sanction clergy who performed gay marriages. He spoke with BU Today earlier this week about the potential split in the church he has served his entire adult life and what the effects of a schism would be on Marsh Chapel.

With Dean Robert A. Hill

BU Today: If the plan passes, the only BU ministers affected would be the two Methodists, you and Rev. Victoria Gaskell, Marsh’s minister for visitation, correct?

Hill: That’s right. The operation, program, and ministry of Marsh Chapel won’t be affected very much at all. We have employed gay clergy in the past. We’ve had a strong ministry among, and with, the gay community here.

Do you think Marsh Chapel will lose some conservative worshippers if the church splits?

No. We have been a strong liberal voice for a long time. It’s been a liberal pulpit. The perspective of Marsh Chapel has been consistent. Marriage and ordination—those are fairly conservative things—why wouldn’t conservative people affirm them? I affirm the need to have gay people engaged in both of those because it’s a wonderful thing!

We’re at this impasse [in the broader church] because we still have a fair amount of work to do in teaching a proper historically, critically, theologically astute biblical theology. The Bible makes ample space for slavery; are we going to affirm slavery? No. The Bible has verses about women not speaking in church; are we going to silence women in church? I’ve served 10 pulpits; not one of them would allow silencing of women. I’d be out and tarred and feathered—rightly so.

We’re going to get to a time when the same thing’s going to happen with LGBTQ+ ministry. It’s not going to be Mary Jones. It’s going to be John Smith—a gay man. That’s lived experience.

You’ve wanted to officiate same-sex marriages for a long time. This potential schism opens that door, but at a price. That must be bittersweet.

In 2019, I spoke and preached and taught in Florida, Texas, California, Ohio, in upstate and downstate New York, in New England. On 50 out of 52 Sundays, I was preaching somewhere. I tried to gather people around where we almost got last year [when the conference came close to passing a plan holding the church together and letting individual congregations decide gay marriage and ordination].

I’m proud to be a Methodist. I think it is one of the finest expressions of Christianity, because it’s a combination of a deep personal faith and an active social involvement.