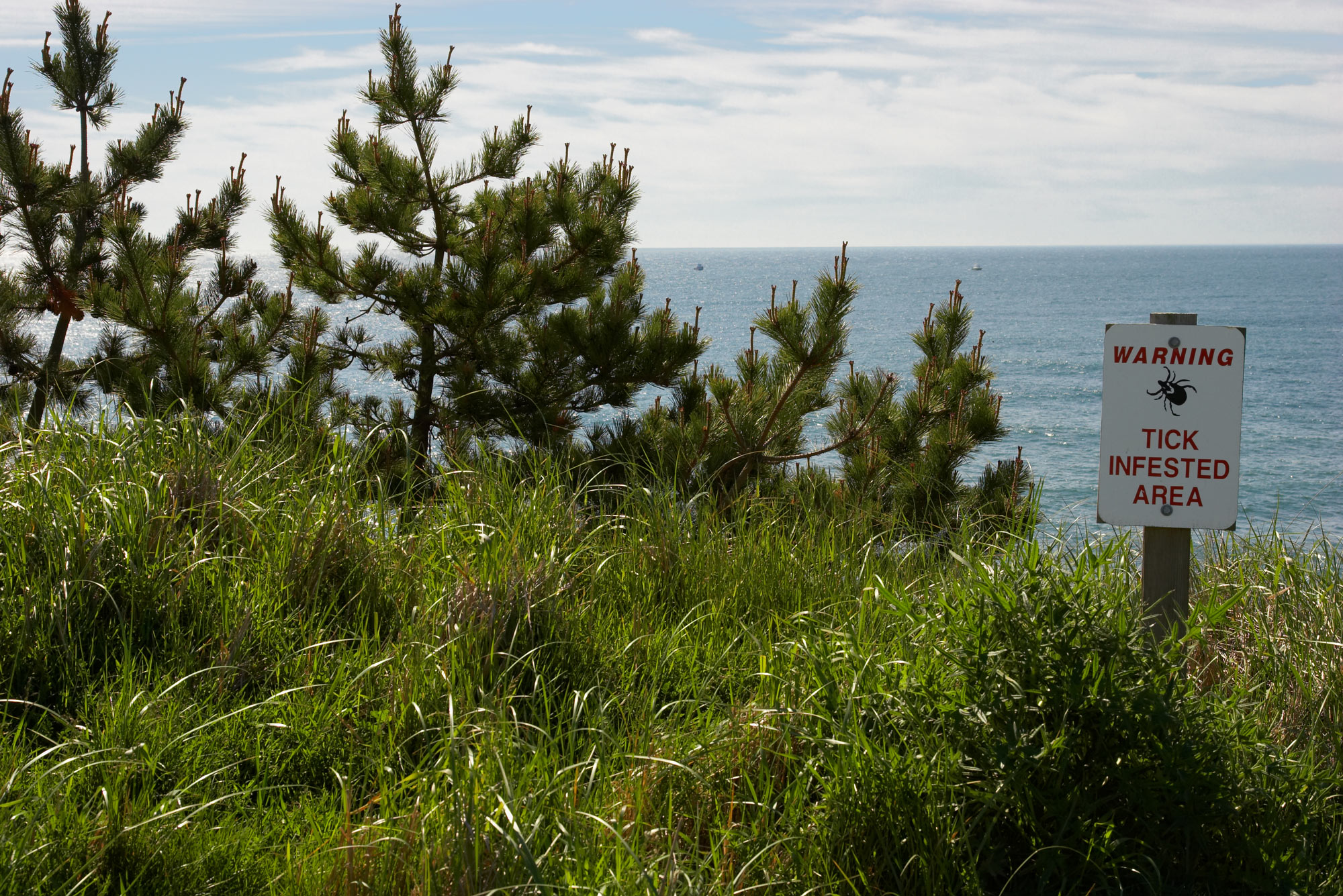 Signs warning visitors of the lurking danger of ticks are common to New Englanders and visitors who enjoy exploring the shore of Cape Cod, or hiking in the Northeastern wilderness. As global temperatures continue to rise and the number of confirmed COVID-19 cases spike in more places, scientists at Boston University worry that vector-borne diseases from ticks and mosquitos will become more prevalent as a result of climate change and other environmental factors. Photo by LIDPS/iStock

As the global pandemic of the novel coronavirus continues on—with cases on the rise in some countries and US states—the world also just experienced the hottest month of May ever recorded, and atmospheric levels of carbon dioxide reached unmatched heights at the Mauna Loa Observatory in Hawaii, which has been monitoring gases in the atmosphere since the 1950s.

But is there a relationship between the coronavirus pandemic and the increasing signs of climate change being detected?

SARS-CoV-2, the virus responsible for COVID-19, is believed to have spilled over from wildlife to humans—bats being the probable culprit. Besides the fact that both climate change and COVID-19 pose serious health risks, scientists have pointed out that some of the root causes of climate change also increase the risk of pandemics—such as rapid deforestation and urbanization, which can promote close contact between wildlife and people and increase the chances for viruses to cross over to humans. The origins of COVID-19 have prompted bold calls to reexamine how people and communities are encroaching on wilderness areas and how to prepare for the spread of diseases in a world increasingly altered by climate change, which exacerbates the problem as different species—their territories shifting with the climate—intermingle in new ways.

“The pandemic has given me a new sense of urgency around big problems that take time to solve, and climate change is certainly a huge problem,” says Gregory Wellenius, a Boston University School of Public Health professor of environmental health, who joined BU in January to establish a program dedicated to studying the impacts of climate change on human health. When it comes to parsing out the ways climate change affects human lives, according to Wellenius, often what first comes to mind are catastrophic natural events—wildfires, hurricanes, searing heat waves—which can lead to immediate injuries and traumatic losses of human life.

“Extreme weather events are increasing in frequency and severity over time,” says Wellenius. But, he says, there are also many slower-moving, less direct ways that climate change—and the human-related activities that increase carbon and pollution in the atmosphere—can harm a person’s well-being, such as displacement from sea level rise, breathing in smoggy air, worsened allergy seasons, as well as a rise in vector-borne illnesses from ticks and mosquitoes, species that have more room to roam north as a result of rising temperatures.

Maine isn’t suddenly going to be as hot as New Orleans, but it’s a gradual effect that could affect our grandchildren. At the rate we’re going, it will happen eventually.

“In the US Northeast, we worry a lot about Lyme disease,” says Wellenius. “Because of the warming temperatures, the ticks that are vectors for Lyme disease survive now further north in areas that they didn’t used to be able to survive.”

Deer ticks—tiny, blood-sucking arthropods that live in forests and grasslands across much of the United States—can carry bacteria responsible for Lyme disease. The disease is found in every state, and causes more than 300,000 illnesses each year, but is most highly concentrated in the Northeastern United States. Though it is considered treatable with antibiotics, it can cause serious, long-lasting, and debilitating symptoms. Michael Dietze, an ecologist at Boston University, also worries that Lyme disease–carrying ticks are quickly expanding their numbers and range.

“Warmer weather lets [ticks] increase reproductive capacity, and in general warming allows most insects to grow faster and expand northward,” says Dietze, BU College of Arts & Sciences associate professor of earth and environment. Disease-carrying ticks, according to Dietze, thrive in warm, wet, forested environments. And as ecological patterns get altered by human activities—such as increasingly frequent wildfires due to global warming or from loggers and farmers chopping down trees—the abundance and spread of ticks will change along with them.

This trend is also true for disease-carrying mosquitoes, according to Tonya Colpitts, a virologist who studies dengue virus, yellow fever virus, Zika virus, and other mosquito-borne illnesses like Eastern Equine Encephalitis (EEE) at BU’s National Emerging Infectious Diseases Laboratories (NEIDL). Global warming, observed by scientists for decades now, also allows mosquitoes accustomed to warmer, wetter weather in the Southern Hemisphere to gradually move north, where the climate would, under normal conditions, not be favorable to the tropical bugs.

“Aedes aegypti is the main human virus vector from those habitats in the Southern Hemisphere, which can steadily change [its territory] due to the climate warming,” says Colpitts, a BU School of Medicine assistant professor of microbiology and director of the Arthropod Containment Laboratory, Level 3 (ACL-3)—an insect laboratory used for research on arbovirus transmission, some of which is currently being occupied for research on coronavirus.

Colpitts says Culiseta mosquitoes—a common species in the United States—are adapted to the seasonal changes and can adapt to cooler months with mechanisms to wait out the winter. But if winter months become warmer due to climate change, mosquitoes in the Southern Hemisphere can begin to migrate north and survive alongside species that already live there. According to Colpitts, different types of Aedes mosquitoes, which normally inhabit warm, tropical climates, have caused minor outbreaks of dengue in warmer states like Florida and Texas. In recent years, they’ve also been spotted as far north as Connecticut.

“Maine isn’t suddenly going to be as hot as New Orleans, but it’s a gradual effect that could affect future generations,” says Colpitts. “At the rate we’re going, it will happen eventually.”

Vector control is currently the only viable solution to combating mosquito-borne illnesses, since vaccines haven’t been developed to prevent diseases like Zika or EEE in humans. But Colpitts and her team are working to develop transmission-blocking vaccines to prevent diseases in mosquitoes—halting their ability to spread disease—as well as working to identify proteins in mosquito saliva that contribute to infection in humans.

Anything we can do to minimize future climate change is likely to have immediate health benefits now and in the future.

“Vector control only works until mosquitoes develop resistance to it,” she says. “We need to both develop vaccines and to control the mosquito population.”

Along with climate change, land use patterns also greatly influence the spread of ticks. As a result of lands being cleared for agriculture and development, states in the Northeastern United States have been reforesting—a win for nature, and unfortunately a win for ticks. With his team of graduate researchers at the Ecological Forecasting Lab, Dietze and his team are working to better predict tick activity by accounting for all of these changes, with the goal of being able to more precisely predict the abundance and activity of ticks on a week-by-week basis during peak season, typically summer months in the Northern Hemisphere.

“We need better methods of identifying tick-borne diseases that weren’t identified before in certain areas, in order to know how they are shifting,” he says. And even as preventive measures like stay-at-home orders were mandated as a way to control the spread of coronavirus, Dietze notes that one of the few activities that has remained acceptable throughout the pandemic is hiking or running outdoors.

”We might actually be exposing ourselves [to Lyme disease] even more as an unintended consequence of COVID-19,” he says.

As far as long-term solutions go, Wellenius encourages preparation for climate-induced phenomena at all levels of government, since the challenges and threats from climate change are unique from place to place.

“These climate hazards are not distributed equally across the country or across the world,” says Wellenius. “We need to certainly focus on the community-level factors, as well as the individual-level factors.”

And as global temperatures continue to rise, the impacts of climate change—whether it’s mosquitoes migrating as a result of warmer weather or stronger hurricanes or wildfires—will become increasingly difficult to ignore, he says. Wellenius is working to develop a program housed at BU’s School of Public Health to more fully understand and quantify the impacts of climate hazards in order to bring more complete, data-backed recommendations to local officials and policymakers.

“Climate change is not a problem of the future or of people far away—it’s here, right now,” says Wellenius. “It impacts our families and communities today and will continue to do so, and those effects will get more pronounced. Anything we can do to minimize future climate change is likely to have immediate health benefits now and in the future.”

There is 1 comment on Ticks and Mosquitoes, Infectious Disease Carriers, Are Expanding Their Range

Ticks and Mosquitoes, Infectious Disease Carriers, Are Expanding Their Range
1
share this