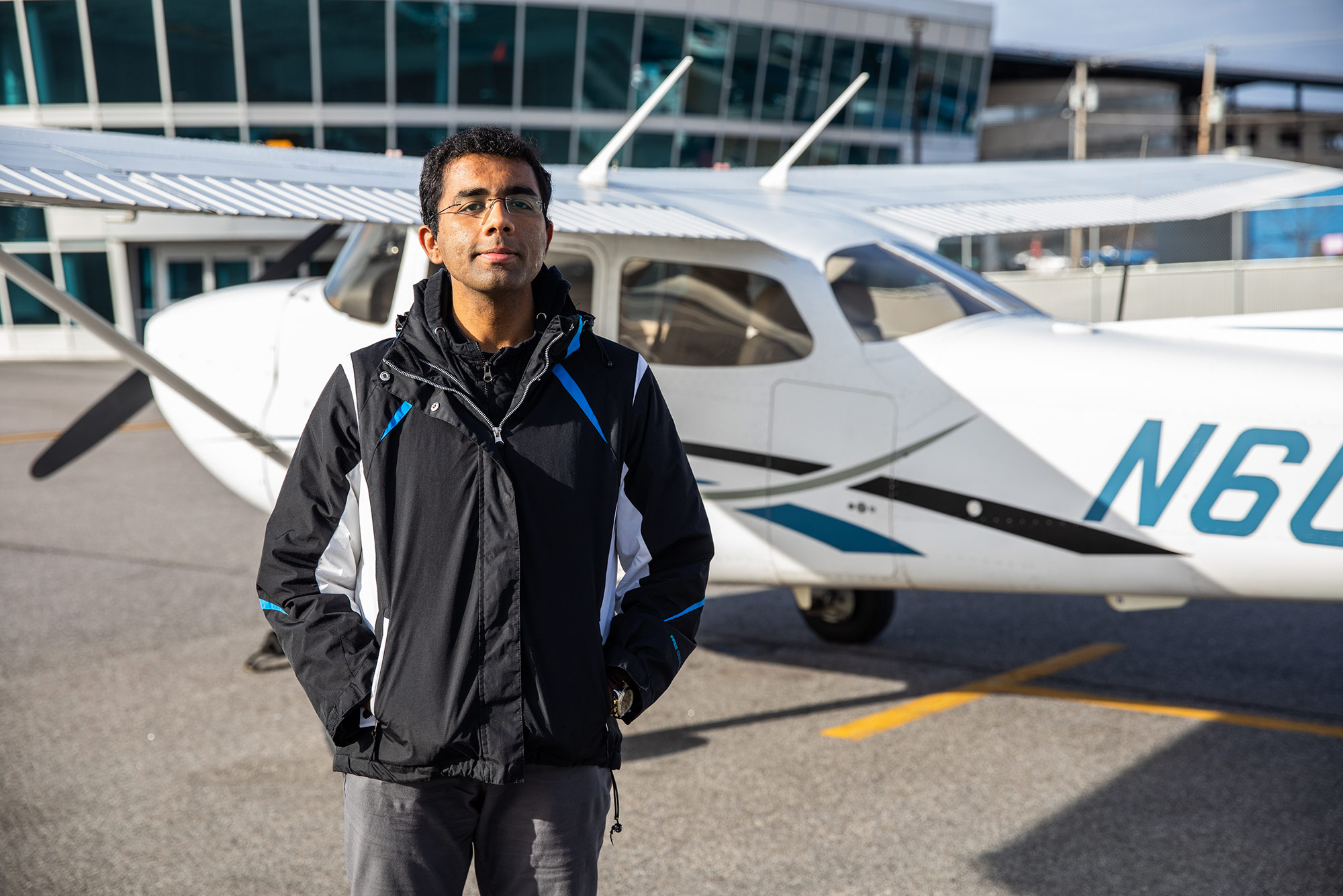 Pilot Dharmesh Tarapore of BU Spark! has invented a device that could end midair near misses

Flying northbound 2,500 feet above Kennebunk, Maine, pilot Dharmesh Tarapore nods to the west and says, “He was coming from that way when it happened.”

“It” was a midair near miss three years ago that inspired Tarapore (CAS’18) to develop a system that could mark a major flight-safety improvement for all small planes.

“He came out of nowhere,” Tarapore says, his voice coming directly into our headsets, so we could hear him over the engine’s whine. “I could make out the pilot’s T-shirt.”

Tarapore was flying from Portland, Maine, back to Massachusetts with a friend. They were in a rented four-seat Cessna 172 much like ours, which is light enough to feel every gust of wind or twitch of the wheel.

It was one of the most frightening flights of my life. I landed and I didn’t know if I would ever go back up again.

Then Portland air traffic control said, There’s an aircraft very close to you, rapidly approaching your position. The other plane may have been on a longer trip or just practicing takeoffs from southern Maine’s Sanford Seacoast Regional Airport, where there’s no tower. The pilot wasn’t in radio contact with Portland or anyone else. They’re well within 500 feet of you, watch out.

“My friend and I were frantically looking out the window, trying to make out this airplane, because a collision means certain death,” Tarapore says. “I spotted the airplane, far too late frankly. It passed a little less than 200 feet below us. By that point, it was just a stroke of luck that the aircraft missed us. There was no way I could have taken evasive action.

“It was one of the most frightening flights of my life. I landed and I didn’t know if I would ever go back up again.”

Close as it was, though, he says, “the only really deadly part of that experience was explaining to my mother when she found out.”

After filing an Aviation Safety Report on the incident, Tarapore began studying reports of similar close calls, wondering what could be done differently. Big passenger and cargo jets—commercial aviation—must be equipped with collision avoidance systems to warn them when another plane gets too close. But there’s no similar requirement for small planes, civil aviation.

Air traffic controllers can help in the immediate vicinity of airports, at least the ones big enough to have a control tower. But everywhere else, safety for civil aviation basically depends on pilots keeping their eyes peeled. That and the long odds of a collision in all that airspace, the Big Sky Theory.

Tarapore wants to change that paradigm.

His own particular interest is extracting useful information from large datasets, which comes in handy in collision avoidance. Every small plane is now required to have a type of transponder called an ADS-B transmitter that broadcasts information about its location and movement. Tarapore has designed and built a device for small planes that uses the ADS-B information to detect other aircraft on an intersecting path and issues alerts, as well as directions for avoiding a collision. He calls it the ACAS, for Aircraft Collision Avoidance System, but he’s mulling a better name.

Our flight in early March—from Hanscom Field in the Boston suburb of Bedford to Portland International Jetport and back—was scheduled as a demonstration run.

One other factor shaped our flight plan, Tarapore admits with a sly smile: “I usually fly to Portland because I want to have these donuts that are made of mashed potatoes. They’re the best.”

A Turbulent Journey to the Aviation Industry

Tarapore was raised mainly in Mumbai, India, where his mother was a professor of organic chemistry and his father ran a construction company. In 2008, he and his mother took a commercial flight that experienced nasty turbulence. “That spurred a comically irrational fear of flying, to the point where I would opt to travel ridiculous distances by train or road, unless I absolutely did not have a choice,” he says. Eventually, he realized he faced a 20-hour air marathon if he wanted to study in the United States: “When I began reconsidering my decision to go to school here, my dad suggested flying lessons.”

A couple of beginner lessons helped, imparting an understanding that pilots go through rigorous training and use redundant safety procedures; a TV documentary helped him better understand the physics holding a plane together in the air. “This finally helped me get over my fear of flying, and I began to see turbulence as little more than roller-coaster rides,” he says. When he arrived in the United States and saw that there was a thriving general aviation community, he decided to get his license.

“I cannot think of anything more liberating than flying,” he says. “It really is a form of mindfulness—an expensive one.” He typically takes a “wet rental” (aka fuel included) for around $165 an hour.

Warning pilots about an imminent threat isn’t novel. ACAS’ novelty stems from its ability to formulate and recommend an avoidance strategy. The algorithm really is the secret sauce.

Tarapore got his pilot’s license in 2016 and his bachelor’s degree in computer science in 2018. He became a BU Spark! fellow in 2017 and technical director the next year. He’s also founder and CEO of ACAS Technologies Inc., dedicated to developing his device for small planes. He founded the company with his friend Vincent Wahl (CAS’19, GRS’19), who has since returned to his native Norway. The company has half a dozen full- and part-time employees besides Tarapore.

“Dharmesh is the quintessential hacker with a mischievous sparkle in his eye, who literally rubs his hands together in anticipation when presented with problems that he thinks he can help solve,” says BU Spark! executive director Ziba Cranmer. “His enthusiasm is even greater when he has a personal stake or conviction in solving the problem.

“Obviously, making sure he doesn’t die while flying his plane is an example of a problem that would matter to him,” Cranmer adds.

While the Cessna’s gas tanks are topped up at the civil aviation terminal at Portland International Jetport, Tarapore grabs the keys to a courtesy car and drives downtown to the sacred storefront of the Holy Donut on Exchange Street in the Old Port, where he opts for his favorite flavor, dark chocolate with sea salt.

Talking tech with Tarapore quickly leads the uninitiated down algorithmic rabbit holes. The ACAS device runs on an algorithm perfected over thousands of software simulations, processing ADS-B signals from other aircraft to understand how they are moving relative to the “ownship” (the aircraft carrying the ACAS unit). If the device detects a collision hazard, it will calculate an avoidance strategy and broadcast this and an alert to a smartphone or tablet via Wi-Fi, with Bluetooth Low Energy as a backup. Green alerts are notifications of a plane within 20 miles, orange signals a potential threat, and red means “you need to act to avoid a collision,” says Tarapore. The device advises pilots to bank (turn), climb, or descend.

“Warning pilots about an imminent threat isn’t novel,” Tarapore says. “ACAS’ novelty stems from its ability to formulate and recommend an avoidance strategy. The algorithm really is the secret sauce.”

The device can also provide audio alerts via crew headsets, and perhaps eventually, upon FAA approval, send messages to the plane’s avionics system, so the pilot can see them on the screens built into the dashboard. It is currently in a third prototype, though COVID-19 pushed back late spring and summer testing plans. There just weren’t enough planes flying to justify testing, says Tarapore.

By 11 am, we are back in the air, banking to the south and heading toward Bedford. It’s early March, but there are few small planes in the air along the seacoast. Tarapore tweaks the ACAS parameters to cover a wider-than-usual area and is happy when not far past Sanford an oncoming plane passes just close enough to set off the device, popping up an alert on his iPad, along with advice for adjusting his flight path.

Despite the COVID-19-enforced delays to subsequent testing, he’s preparing a paper to submit to a major aviation conference that he hopes will bring investor support and a pathway to production.

“The National Airspace System in the United States is among the most professional and competent systems I have had the privilege of flying in, and yet near-midair collisions occur far too often,” he says. “As technology progresses, it is incumbent on both pilots and engineers to use it to improve safety.

“Once our work is formally validated, I plan on making it available to every member of the general aviation community. I never want another pilot to go through what I went through in 2017.”

This article was originally published in the fall 2020 edition of arts&sciences Magazine.

There are 3 comments on Could Alum’s New Device Improve Flight Safety for Small Planes?