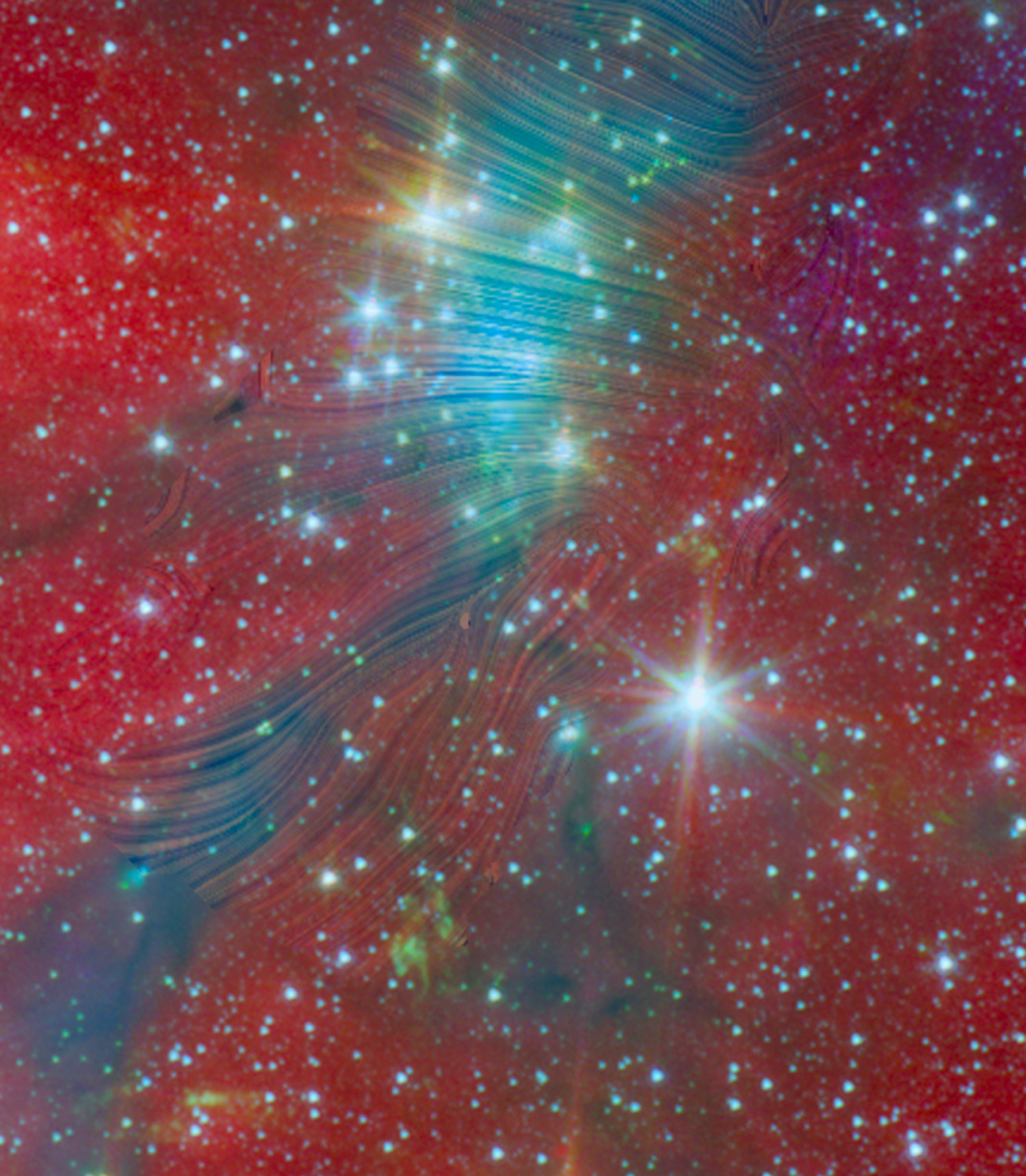 BU astronomer captures first images of magnetic fields reorienting near the site of star formation in a cluster of young stars 1,400 light-years away

To make a star, the universe needs three major ingredients: gravity, turbulence, and a magnetic field. Along with a mixture of gas and dust, the interplay of these three forces manages to achieve the conditions necessary to create the twinkling, bright balls of light we’re all so familiar with gazing at in the night sky. Astronomers have been probing the galaxy for years in order to understand how each factor plays a role when a star is born. Now, one piece of the puzzle just became a bit clearer.

In a paper published in Nature Astronomy, BU astronomer Thushara Pillai finds that magnetic fields within molecular clouds—formations made of cosmic dust and gas—help feed young, growing stars. Pillai’s research helps solve some of the mysteries about how stars come to be and to what extent molecular clouds in interstellar space play a role.

By using high-resolution telescope images of polarized infrared light, Pillai is able to pinpoint where the magnetic field surrounding the group of stars becomes weaker, changes direction, and is pulled back toward the cluster along with the surrounding particles and dust.

These charged particles flow along the field, almost like a conveyor belt, into the cluster of stars. It’s believed that many stars form at the intersection of filaments, vast patterns of cold cosmic gas threaded through every molecular cloud in the interstellar medium—the region of space beyond the bubble of heat and charged particles that emanate from our sun, called the heliosphere.

“The change in direction of the magnetic field…that is what is new about this science,” says Pillai, a College of Arts & Sciences senior research scientist at BU’s Institute for Astrophysical Research. She made the discovery by observing star formation in Serpens South, a nearby cluster of about 60 stars, only about 1,400 light-years away from Earth, that was discovered in 2008. The stars in the cluster are relatively young. Their proximity to Earth and young age provided Pillai with an ideal vantage point for observing the conditions of the molecular cloud surrounding the young stars.

Once stars form within a molecular cloud, the environment is altered in a way that makes it impossible to tell what things were like when the process began. “By capturing filaments like Serpens South in a very young state, we capture them in a very unique moment,” Pillai says.

Magnetic fields in the universe are invisible to most telescopes—plus, the interstellar magnetic field is about 10,000 times weaker than Earth’s magnetic field, making measuring magnetic strength extra difficult. By using data from NASA’s Stratospheric Observatory for Infrared Astronomy (SOFIA)—a specially outfitted Boeing 747 airplane that flies into the stratosphere and observes the universe with an onboard, high-powered camera called HAWC+ that is capable of capturing infrared wavelengths of light invisible to the eye—Pillai, along with BU astronomer Dan Clemens and their collaborators can see dust grains as they align perpendicular to the fields, allowing them to infer the strength and direction of the magnetic field. This is a level of detail that couldn’t be achieved with a ground-based telescope, Pillai explains. She compared data from HAWC+ to different observations captured by a telescope based on land.

Clemens, a CAS professor and chair of astronomy, says the combination of observations from SOFIA and ground telescopes creates a powerful new tool for revealing the vital details of how molecular clouds play a role in star formation.

Pillai captured this stunning image of Serpens South by layering four different telescope wavelengths that expose different aspects of the region at the same time. The color image, originally obtained by the Spitzer Space Telescope, revealed the young stars and the dusty molecular cloud out of which they are born. This image was overlaid with data from SOFIA, revealing the dazzling, threadlike black structure that illustrates the direction of the magnetic field. The bright spots, which look almost like green beads on a celestial string, are the young stars, called protostars, that formed at the intersection of the filament. With this full picture, Pillai and her team can see that stars much like our own sun prefer to form in dense star clusters at these intersections.

“We have reached a point with the SOFIA telescope where we can resolve the structure of the cloud in a way that we can see where the magnetic field actually starts to become weak, pulled in by the tremendous gravitational attraction of the cluster,” says Pillai. The flows of gas traveling toward the cluster center are so dense that they carry and warp the magnetic fields, eventually compressing together so densely that the region collapses under the influence of its own gravity, raising the temperature so high that atoms fuse and give birth to a new star.