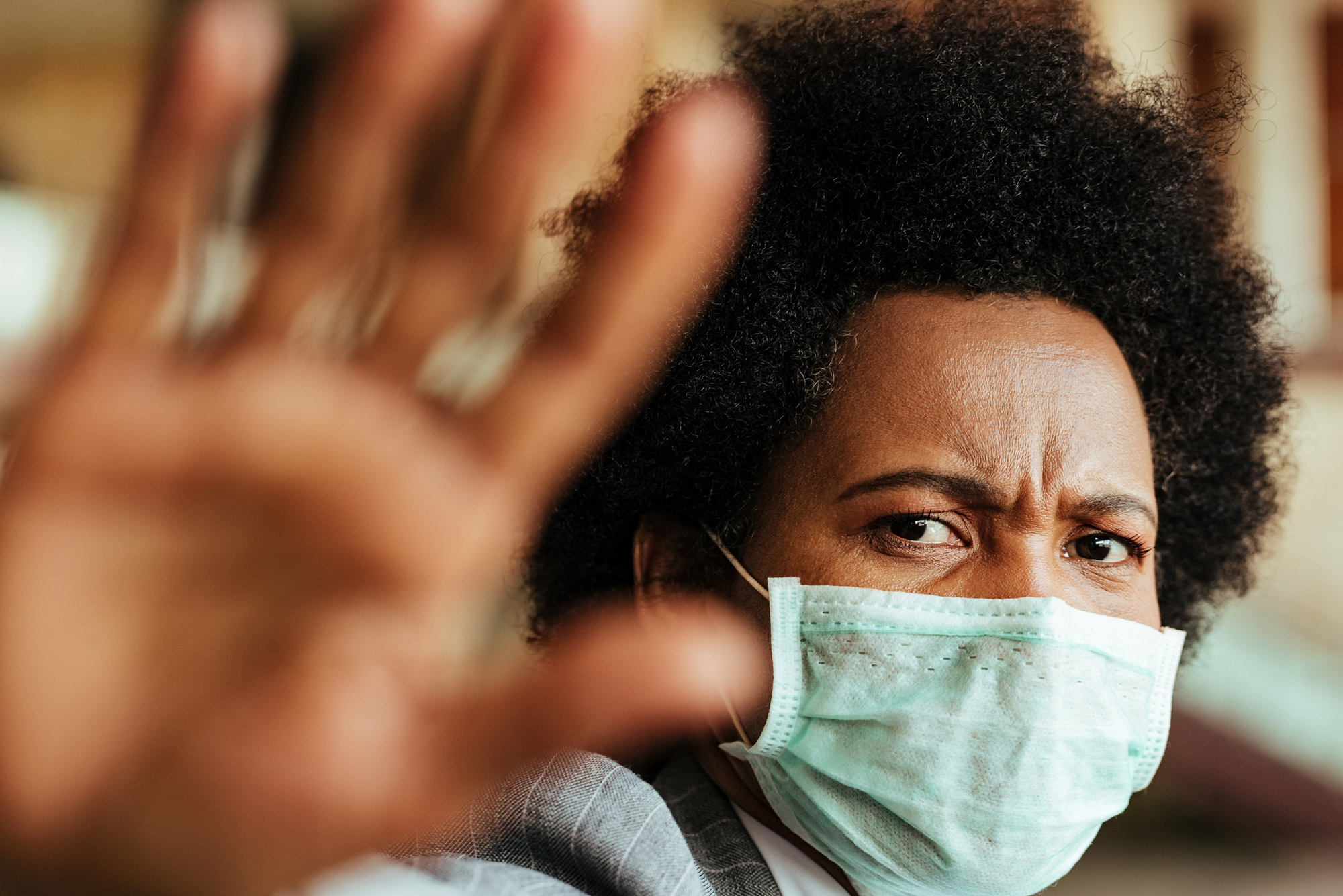 In times of heightened infection risk like the novel coronavirus pandemic, BU researchers find that people become more sensitive to “gross” objects, like a chewed up pencil or dog droppings–and are a lot less likely to have feelings of sexual desire. Photo by Drazen Zigic/iStock

Our immune systems, dependent on antibodies and complex cellular and molecular mechanisms designed to fight foreign invaders, aren’t the only weapons we have against the novel coronavirus and other infectious agents. Actions we take to protect ourselves against foreign pathogens, like washing our hands or effectively covering up a sneeze, play a key role too.

These protective behaviors and decisions we make are all a part of what’s called the “behavioral immune system”—our internal, emotionally driven defense shield, says Carolyn Hodges-Simeon, an evolutionary anthropologist and assistant professor of anthropology at Boston University’s College of Arts & Sciences.

But what motivates these behavioral immune responses in the first place? This psychologically based immune system varies constantly depending on the environment, health conditions, age, gender, and our inclination to be “grossed out.”

“We often assume that disgust has an important evolutionary function to avoid things that might harm us,” says Hodges-Simeon. “So, individual disgust sensitivity should be, if it’s evolved to solve a problem, higher when the risk of an infection is also higher.”

Hodges-Simeon and Jessica Hlay, a BU graduate researcher in anthropology in the second year of her PhD program, tested this theory—both before and after the COVID-19 outbreak exploded around the world—and examined whether or not disgust is a primary motivator for people to avoid coming into contact with things that can cause infection or disease.

Using an online survey platform, the researchers ran two studies—one survey across the United States, El Salvador, and India that began before the global COVID-19 pandemic, and a second survey that was distributed after the outbreak to participants in the United States, India, Brazil, and Italy. This gave them a good sense of how perceived risk of infection influences feelings of disgust, before and after the fast-spreading novel coronavirus, and what individual factors play a role.

For each survey, they asked participants, 500 in the first study and 800 in the second, to rank their feelings of disgust on a scale from zero to six—with six representing the highest level of ick factor—based on questions like, how grossed out are you by a chewed up pencil, or looking at dog droppings, or sharing a water bottle, or shaking hands? In another set of questions, they asked about sexual tendencies and desires—like, how disgusting do you find bringing someone you just met back to your room to have sex?—since sex carries its own set of infection-related risks that can trigger a behavioral immune response, Hlay says.

After analyzing the results, Hodges-Simeon and Hlay share four takeaways from their initial findings that can teach us how our collective behavioral immune responses work to protect us from sickness, before and during the coronavirus pandemic.

1. The greater the risk of infection, the more disgusted we feel.

The most apparent trend the researchers found in their data was that before coronavirus, the perceived exposure to pathogens, along with national death rates from an infection, predicted the level of disgust toward pathogens and attitudes toward sexuality.

“After the COVID outbreak, people perceived their risk of infection to be higher, and accordingly their disgust levels were higher. So, people became more grossed out by basic things like a chewed up pencil or dog-doo now than they were before,” says Hodges-Simeon. Disgust, according to the researchers, causes physical and often uncontrollable reactions in our bodies—its own emotion, with its own facial expression, as compared to anxiety or fear.

By looking at data on global infection mortality and disgust sensitivity, it was evident that the perceived pathogen risk predicts disgust sensitivity, and that perception is a surprisingly reliable indicator of the actual environment. Since a person has a more accurate perception of their smaller “bubble,” or neighborhood or town, local perception of infection risk may be a better predictor of actual risk than national or state level rates. And the more people think they are going to get sick, the more sensitive to disgust they become.

2. The more disgust we feel, the more we’ll try to protect ourselves.

“Heightened disgust levels resulted in heightened protective behaviors,” says Hlay. “Post-COVID, [we saw] an increase in perceived infection exposure, and we [found] people are more tentative to share water bottles, money, clothes, and are more cognizant of others coughing and sneezing, as well as [what germs might be lurking on] public surfaces.”

The biggest change between the survey results before and after the COVID-19 outbreak is that people found shaking hands with others to be significantly more disgusting, finding about a 20 percent increase in people wanting to wash after shaking someone’s hand.

This indicates a higher level of overall awareness to others and the potential germs they carry, since practicing physical distancing lowers the risk of spreading a virus like SARS-CoV-2, which is responsible for COVID-19 infections. To Hodges-Simeon and Hlay, this is a sign that our ability to feel disgusted plays a role in society’s behavioral immune system that protects us from harm.

“This is likely an evolved system,” says Hodges-Simeon. “This system existed already, well before COVID-19 and all of the social distancing regulations. With increased infection risk, we see an increased upward regulation in the [collective] system.”

3. People are less likely to have casual sex during a pandemic.

“We decided to include sexual desires, because sexual behavior itself is pretty pathogen risky,” explains Hlay. She and Hodges-Simeon found that as disgust levels rise, and protective measures rise, sexual desires take a tumble—specifically, sex with a person who is not a long-term partner.

“In the sample we took during the corovavirus outbreak, people indicated they are having less casual sex and have lower sexual desire,” says Hlay. “It’s really all about trade-offs, people trading off sexual behaviors to preserve their own health.”

Both researchers determined this change to be another kind of pathogen-avoidance behavior, driven by higher levels of disgust in a time of heightened infection risk.

“Even prior to the pandemic, people who perceived higher infection risk were less likely to seek out casual sex,” says Hodges-Simeon. “And those people are more likely to feel disgusted by people not washing their hands.”

4. Young men are the least likely to avoid germs.

Everyone is different, of course, with varying tolerance to gross-looking food or seeing an open wound. However, the researchers found that men are less likely to feel disgust compared to women, and are less likely to practice germ-avoidance behaviors like different kinds of physical distancing.

Along with gender differences, age and health are huge factors in measuring disgust and subsequent behavior changes.

“If you’re sick, you might think about yourself as more vulnerable to being infected by something else, so age might factor in because as people get older health might start to decrease,” says Hlay. “We see that people who view themselves as less healthy do show higher disgust sensitivity and when thinking about the behavioral immune system, it’s more beneficial to avoid pathogens and maintain your health, rather than fight off another pathogen and hope the immune system can take care of it.”

Men, overall, view themselves as more healthy than women do, whether or not that’s true. (Men are currently dying of COVID-19 at higher rates than women around the world.) “So, if we’re thinking about the group that’s least likely to comply [with social distancing measures],” says Hodges-Simeon. “It’s young adult males who perceive themselves in good health.”

There are 4 comments on Ew, Gross! Four Ways Disgust Is Shaping the Coronavirus Pandemic