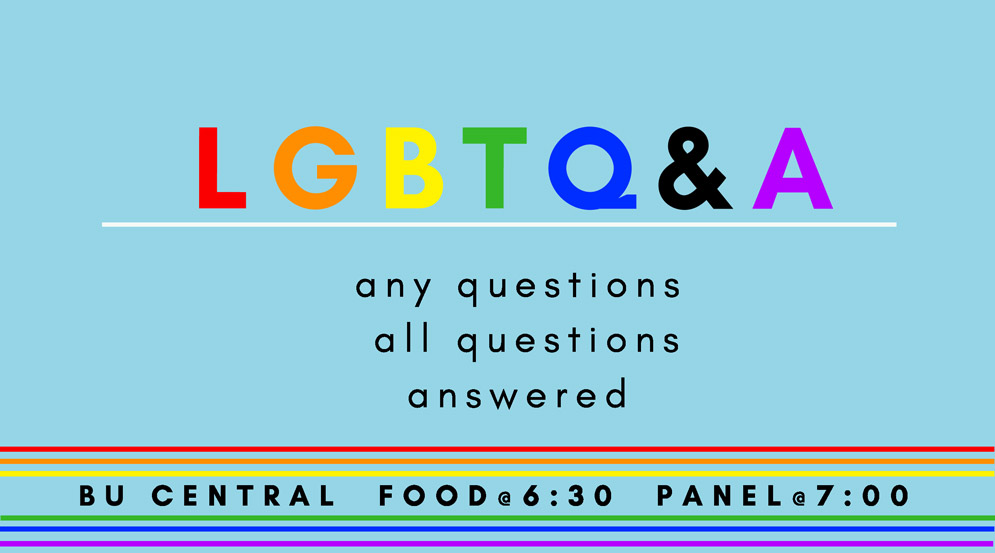 Tonight, in a first-of-its-kind event, the BU community will have an opportunity to anonymously ask any and all of their LGBTQ+ questions. Hosted by Student Health Services Wellness & Prevention, a panel of experts will field queries about issues ranging from sexual health to social supports to how to be an ally for members of the LGBTQ+ community at what’s billed as LGBTQ&A.

Organized by the SHS Student Health Ambassadors, the Q&A is modeled on the popular annual Sex in the Dark program, and like that event, the experts at LGBTQ&A will address anonymous questions in a welcoming atmosphere. The goal is to provide a friendly, nonjudgmental setting where students can get information about topics like coming out to family and friends, navigating BU as a queer student, safe sex practices, and health concerns facing the LGBTQ+ community.

“We hope to help students with the best answers we can about everything from social support to sex to campus life as an LGBTQ+ individual or ally,” says Erica Schonman, Wellness & Prevention program coordinator.

Student health ambassadors Therese Clover (CGS’18, Sargent’20) and Mae Lucey (Sargent’18) helped organize the program because the ambassadors saw a need in the community for more inclusive events that would bring attention to issues of specific concern to the LGBTQ+ community.

“Our committee’s first idea was to create an event that would add to the LGBTQ+ conversation on campus by creating a space for experts to answer any questions that might come up in the minds of BU students,” says Lucey. “And that’s where the LGBTQ&A comes in.”

“We of course are hoping to have many students who identify as LGBTQ+ attend and feel represented,” Clover says. “But this event is also for allies, anyone with an interest in LGBTQ+ rights and those who are dedicated to making sure everyone has a voice and feels welcomed for being who they are.”

“College students are at an age when they are very likely to be questioning their gender and sexuality,” says Brewer. “We don’t give these students many opportunities to get good, accurate information about gender and sexuality in a supportive environment. If students get any exposure at all, it is a small portion of their high school sex education curriculum. And many students won’t even get that.”

He says that programming like this is important because many LGBTQ+ students rely on the internet for answers about their sexuality, and they may be pulling information from unreliable websites.

Oppenheimer says she was eager to be a part of the inaugural LGBTQ&A event because she feels that the community’s unique needs tend to be overlooked.

“I hope those belonging to the LGBTQ+ community can get some information about what we’re doing on campus to make it more welcoming, see and connect to others like themselves, and know there are staff and faculty who are here to listen, support, and advocate for them,” she says.

Both Oppenheimer and Brewer emphasize that the panel is also an opportunity for cisgender and heterosexual students to gain information.

LGBTQ+ allies can “learn how to support their friends and loved ones, educate themselves on these issues, and intervene when they hear or see LGBTQ+ discrimination on campus,” Oppenheimer says.

Recent studies, both in the United States and abroad, have consistently shown that LGBTQ+ youth report higher rates of emotional distress and symptoms of depression, anxiety, self-harm, and suicidal behavior than their heterosexual peers. A 2013 report published in the Journal of American College Health reported that 3.3 percent of gay and lesbian students and 4.6 percent of bisexual students attempt suicide, compared to 0.9 percent of heterosexual students.

“I think, as with all Wellness and SARP events, LBTQ&A will be successful if people have fun and walk away with new information about their health and well-being,” says Brewer. “I hope that people get some of their burning questions answered and that at the same time we start to demystify the concepts of gender and sexuality.

“Additionally, I hope the event adds a further demonstration of the people and places on campus that are queer-affirming and can be a safe outlet for students who are seeking further answers.”

LGBTQ&A is tonight, Monday, February 26, from 7 to 8 pm, at BU Central, 775 Commonwealth Ave. Doors open at 6:30 pm; there will be free food and casual conversation and students can pick up literature about sexual health resources before and after the panel. The event is free and open to BU students, faculty, and staff.

Alex Peña can be reached at alexgp97@bu.edu.

Get Answers to Your LGBTQ+ Questions Tonight

Get Answers to Your LGBTQ+ Questions Tonight
0
share this