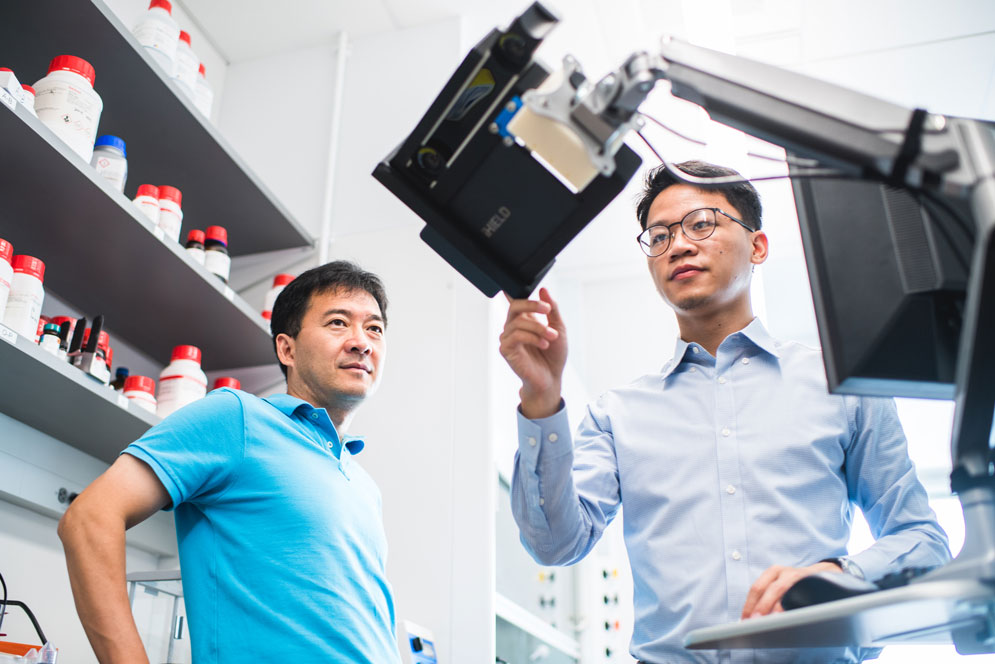 The operating room at Indiana University Health University Hospital was lit up with excitement and relief. The surgery, planned and rehearsed for months, was a success—every trace of the tumor removed.

But this operating room was very different from the others lining the hospital hallway. For one thing, with the exception of the breast surgeon performing the lumpectomy, it was full of engineers, not other doctors and nurses. And it was the only operating room in the building—in the world, actually—using a new, experimental device called AcouStar, which is designed to pinpoint tumors so that they can be taken out faster and more accurately.

And then there was this little added quirk of the procedure: The patient was not actually a patient, but a cadaver, and the tumor was not really a tumor, but a small clip of metal standing in for the real thing. No life was saved that day. But Boston University engineers Ji-Xin Cheng, College of Engineering professor of electrical and computer engineering, biomedical engineering, and of materials science and engineering, Lu Lan (ENG’19), biomedical engineering graduate research assistant, and their colleagues at BU and Purdue University believe that, one day, AcouStar could lead to better outcomes for thousands of breast cancer patients.

A New Tool for Doctors

More than 300,000 women are diagnosed with breast cancer each year in the United States, and most of those who are diagnosed with early-stage disease choose either lumpectomy or breast-conserving surgery, over mastectomy. Lumpectomy is less invasive than mastectomy and is typically easier to recover from. Both surgeries give patients an equal shot at survival.

However, lumpectomy does not always remove the whole tumor the first time around. In fact, one in four breast cancer patients needs repeat surgery soon afterward because microscopic examination reveals that trace cancer cells were left behind. Cheng, Lan, and their colleagues think that AcouStar will increase the odds of removing tumors completely on the first try.

Cheng’s research group invents new ways to study the body using light instead of invasive, and potentially toxic, chemical stains and labels. In 2016, Cheng and his coworkers were observing a lumpectomy surgery and noticed how long it took just for the surgeon to locate the tumor. “The surgeon may take a couple of hours to find the tumor, and sometimes they miss it,” says Cheng. He wondered: “Is there a way we can help the surgeon see the tumor in real time, during the surgery?”

Many small, early-stage tumors can’t be felt by hand during an exam, which makes them difficult to locate during surgery. For tumors like these, a doctor typically inserts a thin guide wire, less than a millimeter wide, into the breast prior to the lumpectomy, using mammography or ultrasound to make sure that the tip of the wire is sitting inside the tumor.

The technique is the gold standard, but because the position of the wire is not visible to the surgeon, finding the tumor is still a challenge, explains breast surgeon Linda Han, director of breast oncology at the Parkview Cancer Institute, who has been collaborating with Cheng’s team since 2014. First, the surgeon has to mentally map two-dimensional scans onto a three-dimensional body. This maneuver is made more complicated by the fact that the patient’s position changes between the time the wire is placed and the time she reaches the operating table. “If it’s really deep you really have no idea where the tip of the wire is,” says Han. The result: prolonged surgeries and higher rates of redo operations.

Cheng brought the problem to graduate student Lu Lan. Lan quickly devised a plan to harness what’s called optoacoustic technology, which uses light to generate sound waves, to create a beacon that could broadcast the location of the guide wire tip. Then, after hearing that Microsoft’s augmented reality headset, HoloLens, was taking early orders, Lan and Cheng got the idea to project a virtual image of the guide wire tip onto the HoloLens display during surgery. “We realized that augmented reality can be the part that fills the gap of improving the efficiency of the surgical guidance of our optoacoustic guide,” says Lan.

AcouStar works by sending nanosecond flashes of laser light through a fiber-optic guide wire. Because the laser pulses are so short, they don’t heat up the breast tissue; instead, their energy is converted into sound waves, too high for humans to hear, that ripple out in every direction.

Those sound waves are picked up by three sensors attached to an adhesive patch stuck on the outside of the patient’s breast. By comparing the time it takes for the sound waves to arrive at each of the three receiving sensors, the device can triangulate the location of the guide wire tip to within less than a millimeter.

Device makers are developing similar beacons using a variety of different technologies, says Cheng. One is a tiny radioactive “seed” that the surgeon places at the site of the tumor. But that seed absolutely must be removed after surgery, and many hospitals are wary of taking on risk associated with temporarily implanting radioactive devices in the body. Another type of beacon sends out radio waves, but this approach isn’t very precise, and the radio waves can also interfere with other electronic instruments used during surgery. AcouStar is appealing to surgeons and hospitals because it does not produce electromagnetic radiation or radioactivity, says Cheng.

The Future of Surgery?

Arriving at the concept was the easy part, says Lan. The hard part—turning it into something that doctors would actually want to use—was still to come.

“Doctors and engineers speak different languages,” says Cheng. While doctors are pragmatists, engineers are technology-first thinkers, Cheng explains, always devising new uses for the latest materials and techniques to come out of their labs. Even the most state-of-the-art gadget will flop if no one needs or wants it, says Cheng. “It may be cool, but it may not be useful.” That’s why Cheng takes a “problem-oriented approach,” starting each project by working with doctors to identify a problem, rather than looking for jazzy applications of new technology.

Lan learned this lesson firsthand, when Han and her surgical colleague, Samilia Obeng-Gyasi, gently vetoed his proposal to use the HoloLens: the headset was just too heavy for a surgeon to wear for the duration of a surgery, they said. So Lan changed course, deciding to project the AcouStar guidance onto a tablet display instead.

In the spring of 2017, after three months testing a prototype on a silicone breast model called a “phantom,” Cheng, Lu, and their team were ready for a more realistic trial. At this proof-of-concept stage, they couldn’t yet test it on a real patient. But they could try it out on a cadaver breast.

The solution was standard stuff for surgeons, but was way outside the engineers’ lab-bench comfort zone. Lan spent three days discussing the idea with his team before deciding to go ahead with it, but ultimately it was an easy decision, he says: “The main thing, the goal, is to verify the device, so we have to push ourselves to overcome this mental barrier.”

The team would have access to the cadaver for only three days, and Obeng-Gyasi would act as surgeon. On her very first try, she was able to completely excise the “pseudo-tumor,” but the researchers realized that the patch they had used to fix the sensors to the body wasn’t sticky enough; it kept moving around during the surgery.

Two months later, after tweaking the sensor patch design, the team was ready to try again. They spent hours reviewing video footage of their previous attempt, figuring out how they could make the procedure faster and more accurate. The surgery was a success, and the team published their work in May 2018.

Now, working with Vibronix, a company founded in 2014 by Cheng and his colleague Pu Wang, and with support from the National Science Foundation’s Small Business Innovation Research program, AcouStar is getting ready to move beyond the prototype stage. That means demonstrating that the fiber-optic guide wire is safe in the body for up to 24 hours, as well as making the AcouStar platform smaller and easier to use. Ultimately, Cheng believes AcouStar could be used not just for breast cancer surgery but for a wide variety of procedures that require surgeons to locate something they can’t see or feel with pinpoint accuracy.

“It’s really important that we utilize technology that’s clinically meaningful for our patients and surgeons,” says Han. “For these impalpable tumors, 3D virtual localization is the technology that’s going to be the wave of the future.”