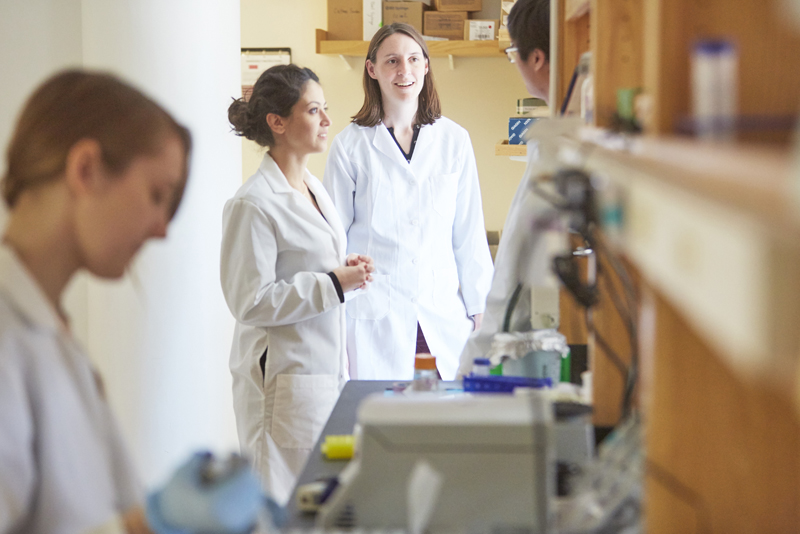 Antibiotic resistance is a global threat that leads to more than 23,000 deaths each year in the United States, according to the Centers for Disease Control. Overexposure to antibiotics has long been blamed, but Mary Dunlop, Boston University assistant professor of biomedical engineering, is flipping that idea on its head, finding that bacteria can also develop resistance without being exposed to antibiotics. In new research published in Science, Dunlop and coauthor Imane El Meouche, a postdoctoral scholar in Dunlop’s lab, discovered a link between a short-term survival technique used by bacteria and long-term drug resistance.

For decades scientists have leaned into the idea that drug resistance comes with prolonged exposure to that drug. El Meouche believed the same and expected her research to confirm it. But a control experiment curiously revealed a previously unexamined correlation between temporary protective measures and mutations that lead to permanent drug resistance.

In nature, bacteria will use what are called efflux pumps to push antibiotics and other toxins out of the cell to protect themselves. These pumps are costly for the cell to produce and slow cell growth because they compromise the cell membrane and use a lot of energy. To balance the potential reward of survival against the certain cost of pump production, bacteria will hedge their bets by diversifying the number of pumps different cells express.

“Pumps are well known to be very important for antibiotic resistance,” says Dunlop. “We found that cells that have more of these pumps are not only inherently more resistant to antibiotics, but they are also in a position where they mutate to achieve a higher level of drug resistance. Expression of pumps may be a stepping-stone to drug resistance.”

One of the more surprising aspects of these results is that the bacteria were prone to mutations that cause resistance even though they were never exposed to antibiotics. To test this, Dunlop and El Meouche genetically engineered bacteria to express varying levels of pumps. Then, Dunlop says, they decided to look at the relationship between efflux pump expression, a DNA repair enzyme, MutS, and cell growth rate.

They hypothesized that if bacteria must permanently mutate their DNA to develop antibiotic resistance, then a DNA repair protein might be linked to the process. And they were right—their findings show that there is an inverse correlation between efflux pump and MutS protein expression in bacteria; the more pumps the cells decide to use, the fewer MutS proteins a cell will have.

The same line of thinking was applied when they looked at the link between cell growth rate and efflux pump expression. Slow cell growth has been known to lead to more mutations in cellular genetic material and the fact that increased pump expression and slow cell growth could be directly related to not just be a correlation, but a causation of permanent, genetic antibiotic resistance in bacteria.

“Not only are bacteria resistant because they are expressing efflux pumps, but they are also more prone to mutation through these other connections,” says El Meouche. “What I find interesting is how varying expression of certain genes can lead to permanent genetic changes in the future.”

So far, Dunlop and El Meouche have uncovered three pieces of this mechanism, but are unsure of where those pieces fit in the larger antibiotic resistance puzzle. Those pieces could be directly related, causing the observed relationships, or, more likely, there could still be missing links in a chain of biological events that leads to resistance.

“We know a lot about genetic changes that pass through a population from events like the hostile environment of an infection,” says Dunlop. “But we don’t know a lot about that very first step of how an individual bacterium changes from being susceptible to resistant.”

That first step is one piece of the puzzle they will continue to put together. This finding opens up the possibility to explore how exactly these cells can develop antibiotic resistance in the absence of antibiotics and then potentially develop ways to block that pathway and curb resistance.

Antibiotic Resistance without the Antibiotics