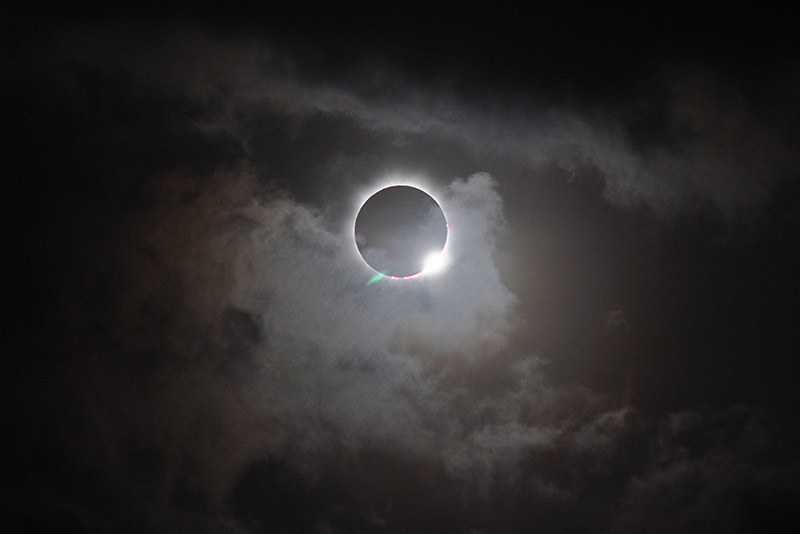 During the solar eclipse on August 21, the moon will completely block the sun’s energy from reaching Earth within a 70-mile shadow that will sweep across the US, presenting scientists with a unique research opportunity. Photo courtesy of NASA

On August 21, 2017, the US will play host to a rare natural phenomenon: a complete solar eclipse that will cut a swath from Oregon to South Carolina. And as people across the country clamor outside, eclipse glasses in hand, to see the remarkable sight of the moon blocking the sun, Joshua Semeter and his research team will be busy using GPS sensors to gather data on the Earth’s upper atmosphere.

Semeter, a Boston University College of Engineering professor of electrical and computer engineering, and his team will scatter inexpensive GPS sensors in the path of the eclipse to take measurements as it moves overhead. If all goes as planned, the project will not only deepen our understanding of Earth’s upper atmosphere—which has the potential to disrupt technology like GPS navigation systems—but will also demonstrate how cheap GPS sensors like the ones in smartphones could be used for broader “citizen science” initiatives.

During a total solar eclipse, the moon is perfectly aligned between the Earth and the sun, blocking the sun’s energy from reaching the Earth within a large shadow that moves across the Earth’s surface. On August 21, this eclipse shadow, which Semeter calls a “supersonic sun shade,” will be 70 miles across and sweep across the US at between 1,500 and 3,000 miles per hour, taking about 90 minutes to travel from coast to coast. People directly under the eclipse path will have the eerie experience of watching the sun seemingly disappear during broad daylight, while those further from the path will see the sun partially covered.

But this total solar eclipse is more than a rare natural phenomenon: for scientists, it is a unique research opportunity. “It’s like a controlled experiment,” Semeter explains. “Mother Nature is providing us a nice experimental environment.”

Semeter studies the ionosphere, a layer of charged particles (electrons and ions) between 30 and 600 miles above the Earth’s surface. The ionosphere is formed when ultraviolet radiation from the sun hits the Earth’s upper atmosphere, knocking electrons free from their parent atoms. This layer is a tricky challenge for GPS navigation systems: it slows down and bends radio waves passing through it, forcing GPS devices to correct for it. The size of the correction depends on the density of charged particles, or plasma, that the radio waves travel through on their way from satellite to GPS receiver.

Semeter’s team, helmed by PhD student Sebastijan Mrak (ENG’21), wants to know what happens to the ionosphere as the eclipse shadow, which is totally devoid of the sun’s ultraviolet radiation, plows across the country. To figure it out, the researchers will head to Missouri—on the path of the eclipse—and deploy 20 cheap GPS receivers at schools and homes alongside much fancier GPS receivers already installed throughout the state. (The Missouri Department of Transportation received a block grant several years ago to install sensors throughout the state, and Missouri now has one of the best networks of high-quality GPS sensors anywhere in the country.) The fancy receivers will provide highly accurate measurements at coarse resolution, and the cheaper receivers will fill in the gaps.

As the eclipse passes overhead, the GPS receivers will record how much radio waves from satellites are slowed down and bent on their way to Earth, which Semeter and his team will use to measure the density of the plasma. They will then attempt to use the plasma measurements to create images of the ionosphere during the eclipse, with each GPS measurement acting like a single pixel of a digital photo.

“We’ll be able to hopefully see all kinds of wave phenomenon and adjustments in the atmosphere caused by the eclipse,” Semeter says, adding that, for example, there will be a cold spot inside the eclipse and a hot spot outside, which could create instabilities in the ionosphere that launch waves away from them. He is also hoping to capture “bow waves” and “stern waves” created as the eclipse moves through space, named for their similarity to the waves a boat produces as it moves through water. “And there is, of course, possible discovery,” Semeter says. “We’ve never had measurements like the type we’re trying to make.”

Beyond scientific discovery, there are also practical reasons for learning more about these effects on the ionosphere, which are a form of “space weather.” Small-scale variations in the ionosphere, like waves created by the eclipse, can degrade the accuracy of satellite navigation systems and may even cause GPS signals to be lost completely.

The ionosphere, a layer in the Earth’s atmosphere that reacts strongly to solar activity, gives off a red-green glow when solar rays strike it and strip electrons off of atoms. This video shows this airglow as seen from the International Space Station. Video courtesy of Science News

But Semeter’s project, which is funded by the National Science Foundation, is not only about understanding the physics of the ionosphere. He also wants to know if these cheap GPS receivers (they cost $80 each) can provide scientific data as valuable as that gathered by the more capable GPS receivers in Missouri (which cost $10,000 each). The essential question is: which is better, a small set of highly accurate measurements or a huge set of measurements with limited accuracy? Semeter hopes to show that the best approach is to use both types of measurements collaboratively.

“If this works, a next step could be to try and modify this so it actually works with your mobile phone GPS, and then the next step would be to get citizens to volunteer their data,” he says.

Philip Erickson, an ionospheric physicist at MIT and the assistant director at MIT’s Haystack Observatory, is excited about what Semeter’s project could reveal about the basic physics of the ionosphere and the kinds of research projects it could lead to in the future.

“What we have now is a very limited picture [of the ionosphere] because we’ve been looking in little spaces here and there,” he explains. “What is quite interesting to me is the potential here to greatly expand our view…[and] unlock the potential of a crowdsourced, very large network of GPS observations.”

Semeter’s ultimate goal is to create a “crowdsourced observatory” that taps into the 2 billion smartphones around the world. “Imagine getting the data from all of those sensors and aggregating those measurements to create these real-time pictures of the space environment,” he says. “The potential for this to morph into something where huge numbers of people across the planet could help push back the frontiers of science is really exciting.”