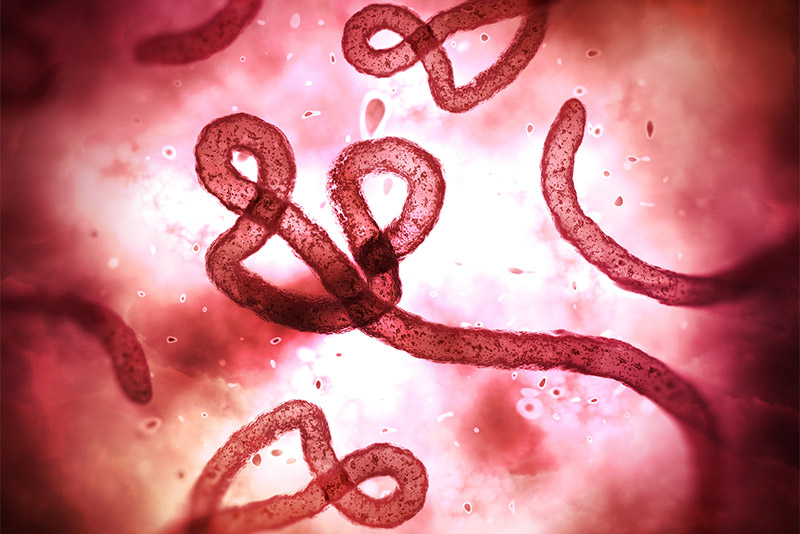 The 2014 Ebola epidemic in western Africa was the worst outbreak of the virus in recorded history, killing more than 11,000 people. In the Republic of Guinea, around 60 percent of people infected with Ebola died. Illustration by Henrik5000/iStock

In 2014, Ebola exploded across western Africa. It was the worst outbreak of the virus in recorded history, killing more than 11,000 people before it sputtered out in early 2016. In the Republic of Guinea, the epicenter of the epidemic, around 60 percent of people infected with Ebola died.

While the outbreak taught physicians and scientists much about Ebola, many questions remain. Foremost among them: why do some people survive an infection, while others die? Researchers know that some obvious factors, like supportive hospital care, improve prognosis. They also know that high viral load—the amount of virus present in the body—is frequently associated with death. But these factors alone didn’t account for all those who survived or succumbed to the disease, and they didn’t always predict who would live or die.

Now, a team of researchers led by Boston University, the University of Liverpool, Public Health England, and other international agencies has discovered a biomarker that can help predict the progression of the disease: a handful of genes that are over-activated in patients who succumb to the disease. These genes indicate an overly aggressive primary immune response, which can damage organs—particularly the liver—and, paradoxically, may hamper a more targeted immune response. The research, funded by the United Kingdom’s National Institute for Health Research and the US Food and Drug Administration, and published on January 19, 2017, in the journal Genome Biology, suggests a new type of blood test that, while still in the preliminary stages of development, might be useful in future outbreaks to steer patients to the best treatment.

“The study suggests that something about the way people respond to infection affects their chance of survival,” says John Connor, associate professor of microbiology at BU’s National Emerging Infectious Diseases Laboratories and corresponding author on the study. “We can get a sense of who will survive and who won’t, and we can get it earlier,” he adds. “This is the first study of this type ever done on this scale.”

Connor and Emily Speranza, a PhD candidate in bioinformatics and a National Science Foundation Graduate Research Fellowship Program fellow at BU, became involved with this research when scientists in England contacted Connor’s lab, asking for help interpreting data. The Liverpool scientists, in conjunction with Public Health England, had been analyzing blood samples from Ebola victims that had been collected and preserved during the outbreak. They had a wealth of data from the samples, including measurements of mRNA in patients’ blood—a good indicator of gene activity.

The English scientists, who noticed that the mRNA produced by Ebola victims corresponded to genes involved with the human immune response, contacted Connor’s lab because he had studied the same immune response in monkeys. “We were excited to be part of the analysis team,” says Connor.

Speranza, working in parallel with colleagues in England, correlated the mRNA in 128 samples to 10 genes, all of which were activated in patients who had died. When they looked for the biomarkers in an unrelated set of blood samples, they found the test to be 70 percent accurate; in other words, 70 percent of the patients were correctly predicted to survive or succumb to the disease based on the biomarkers.

She also found evidence of activation in genes that make albumin and fibrinogen, indicators of severe liver damage. “Albumin and fibrinogen are only produced in the liver, so the mRNA’s for those proteins are usually only found in the liver,” she says. “When you see really high levels of those in the blood, that means that the liver cells are busting open and spilling their contents into the bloodstream.” Because the liver produces many critical molecules for the body, including proteins that allow blood to clot, says Connor, the liver’s demise may be what gives the virus the upper hand in some patients.

Connor believes that, while this study used samples from the 2014 outbreak, which involved only the Makona strain of the virus, the same or similar biomarkers are likely to appear with other strains of Ebola. Overall, he says, the research gives more insight into who the disease kills and who it spares. “The nature of the victim’s immune response has something to do with it, but the information we got from these samples is a one-time snapshot,” says Connor, who notes that the blood samples show victims at both early and late stages of the disease, so they may not give a full picture of the immune response. “This study gives us an important piece of information,” he adds, “but it doesn’t solve the whole puzzle.”

Blood Test May Predict Who Lives or Dies with Ebola