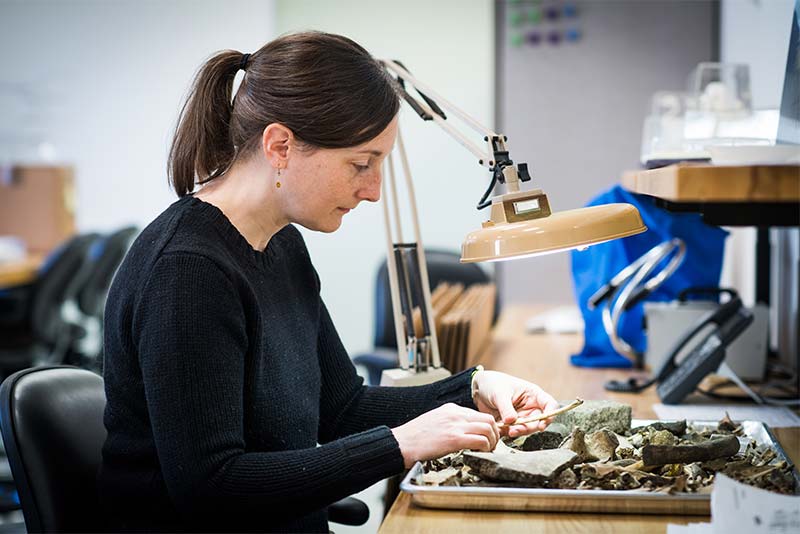 Catherine West, a BU research assistant professor of archaeology, set out to discover the origins of a small rodent on a remote island. What she found were some big questions. Photo by Jackie Ricciardi

When West, a research assistant professor in Boston University’s archaeology department, arrived on the small island of Chirikof in the Gulf of Alaska, she planned to study how the island’s bird population had changed over time. More specifically, West wanted to see what native Alaskans’ food waste could tell her about the island’s bird population, and vice versa. She started to excavate the island’s middens (the trash dumps of ancient people) to see what the animal remains in there could tell her. She kept bringing up bones from birds, whales, seals, and, surprisingly, a lot of ground squirrels.

“It was kind of an accident,” says West. “We didn’t know that they were going to be there.”

She didn’t know, because it was commonly thought that these Arctic ground squirrels—amber rodents resembling small groundhogs—were brought to the island by Russian settlers only around 200 years ago. That recent (ecologically speaking) introduction, and the fact that they are known to prey on native birds and eggs, earned them the label of “invasive species.” If biologists hoped to one day restore Chirikof to its natural state, all invasives would have to go. But West was digging deeper than 200 years, 1,700 years deeper. Finding 2,000-year-old rodents on a remote Alaskan island began research—detailed in a paper in Conservation Biology—that highlighted just how complicated terms like ‘native’ and ‘invasive’ can be.

Chirikof Island, part of the Alaska Maritime National Wildlife Refuge that stretches across 3.4 million acres of tundra and choppy ocean, is home to thousands of native birds and a few invading mammals. “Chirikof Island has introduced Arctic foxes, it has feral cattle, and it has these ground squirrels,” says Steve Ebbert, a wildlife biologist for the refuge. “I know where the Arctic foxes came from—I know very well where they came from. I know where the cattle came from.” The foxes, he says, came from Russian settlers. Documents show that about 200 years ago, Arctic foxes were let loose to fuel the Russian fur trade. And he has similar documents showing the more recent introduction of cattle. But documentation on ground squirrels—“not so much.”

The ground squirrels were thought to be brought over by the Russians, as well, as fox food and to be harvested for their own pelts. But the lack of documentation on them led to some speculation on how “invasive” they really were, even before West got to the island. When she came up with 2,000-year-old bones, Ebbert encouraged her to dig deeper into the mystery.

Back in her lab, West lays out three small plastic baggies of sorted and labeled “ground squirrel bones.” The bones are mostly humeri—arm bones—the longest no bigger than a pinky finger. They look old and have lost their ivory luster; they more closely resemble dirt, rock, or brittle bark. “This doesn’t look like a lot here,” she says, pointing to another six cardboard boxes of various animal bones, “But there are tens of thousands of bones. We sorted through 17,000 squirrel bones alone.”

To answer the invasive question, West needed to know both when the squirrels got to the island, and how. Those answers, she hoped, were hidden in the bones, and she teamed with Courtney Hofman—then a PhD student at the Smithsonian Conservation Biology Institute’s Center for Conservation Genomics and now an assistant professor of anthropology at the University of Oklahoma—to look for them. With radiocarbon dating, Hofman and West confirmed that the ground squirrel bones were 2,000 years old, but she couldn’t say much beyond that. Did the animals walk over on a land bridge 10,000 years ago when the oceans were lower? That would certainly make them native, but West and Hofman couldn’t say. Maybe they swam or rafted over only a couple of thousand years ago. That would also make them, technically, native. Hofman and West knew that the native Alutiiq people frequently traveled from island to island; could they have brought the ground squirrels over? Any human involvement might label them invasive. Hopefully, DNA analysis would yield more clues.

In many bones, DNA can degrade quickly, but Hofman was in luck. “Ancient DNA preserves better in cold, dry environments,” she says. Chirikof isn’t exactly dry, but the cold and the very recent excavation kept enough DNA intact so that the bones “worked pretty well.”

Hofman extracted DNA from the cells’ mitochondria to look at a gene called cyt B. When it comes to knowing how two animals relate, cyt B is particularly helpful, because it changes and mutates at a reliable pace. Like a molecular clock, cyt B can indicate how closely related two populations are, and when they might have separated.

“It seems unlikely to me that they rafted [to Chirikof] or swam there, because it is so isolated,” says West. “It’s well known to be extremely rough sea. It is possible that this little squirrel got there successfully, but it seems far-fetched.”

Instead, she says, the ground squirrel might have been introduced by people after all, just not Russians. The most likely hypothesis, she thinks, is that they were carried there by native Alaskans, though for now she can’t say for sure. If that is true, then in the eyes of the refuge, says Ebbert, they’re invasive—though he is quick to point out that they are far from the most damaging species. The refuge has no plans, or funding, to eradicate Chirikof’s ground squirrels. Instead, says West, the more important point is the conversation that it brought up.

There is 1 comment on Arctic Squirrels: Invasive or Native Species?