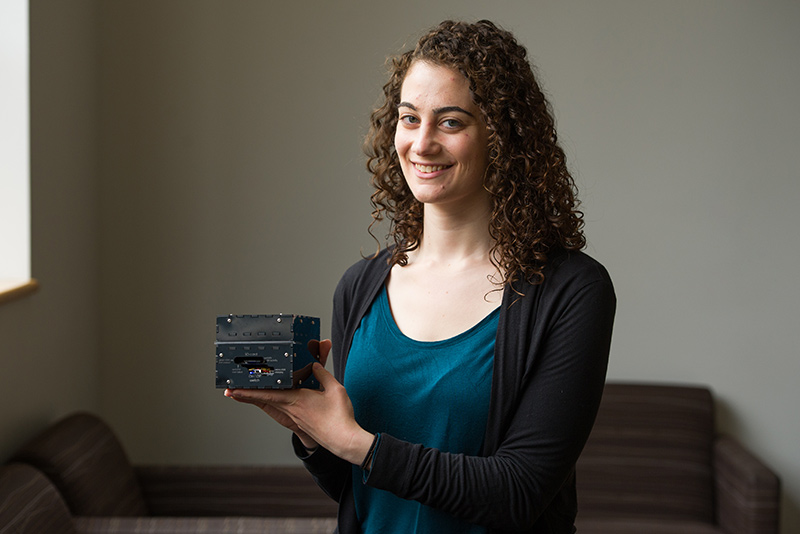 Dana Braff, BU PhD candidate in biomedical engineering, is co-lead author on a Cell paper that describes a prototype for a new Zika diagnostic.

Zika grabbed the world’s attention in late 2015, when scientists in Brazil began to suspect a connection between the virus and fetal microcephaly—a syndrome in which babies are born with small heads and neurological deficits—and also Zika’s possible link to Guillain-Barré, a neurological syndrome which can cause weakness and temporary paralysis. Despite the efforts of health officials, 66 countries and territories have reported transmission of Zika virus, according to the World Health Organization (WHO). In late April 2016, the Centers for Disease Control and Prevention (CDC) reported the first death attributed to Zika in the United States: a man in Puerto Rico, which as of April 14, 2016, had 683 confirmed Zika infections.

One of the most vexing challenges of Zika is that it is so difficult to diagnose. Many symptoms of the virus—like fever, headache, fatigue, and malaise—overlap with dengue fever and chikungunya, and an estimated 80 percent of people infected with Zika show no symptoms at all.

Now, a team of researchers has developed a prototype for a simple, inexpensive Zika test using RNA sensors embedded in tiny discs of paper, which turn from yellow to purple in the presence of the virus. The prototype, reported online in the May 6, 2016, issue of Cell, successfully detected live Zika virus in blood plasma from an infected macaque in just over three hours. It was also able to differentiate between Zika and dengue, and between two different strains of Zika. The new technology offers a method for deploying sensitive molecular diagnostics to the field and may also demonstrate a path to quickly develop diagnostic tools for global health crises.

“This shows how we can use synthetic biology in a rapid, inexpensive way to respond to emerging outbreaks,” says James Collins, Termeer Professor of Bioengineering at the Massachusetts Institute of Technology and an affiliate of Harvard’s Wyss Institute, who is senior author on the Cell paper. Collins notes that his interdisciplinary research team, working at seven different universities, built and tested the diagnostic in about six weeks. “We’re a group of academics who are not set up to do this, but we dropped everything and pulled it together,” he adds. “A team from industry or a government lab, set up to do this, could have this going in less than a week. That’s the potential of this synthetic biology platform.”

Blood tests for Zika already exist but are problematic. One type of test looks for antibodies that people produce when they are exposed to Zika, but the results can be difficult to interpret because similar viruses, like dengue, prompt patients to produce similar antibodies. The prototype diagnostic described in Cell uses a different type of analysis, called a nucleic acid-based test, which looks for RNA sequences specific to Zika. These tests are more accurate, but existing versions are costly and time-consuming, according to Dana Braff, a PhD candidate in biomedical engineering (ENG expected 2017) at Boston University and co-lead author on the Cell paper. “These tests require expensive equipment, and someone has to be trained to use it. Many countries have very few centers where you can send the test for analysis,” says Braff, adding that the reagents alone for existing tests can cost $5–$20 per test, while the paper-disc prototype only costs about $1 per test.

The new Zika diagnostic lowers costs by taking advantage of two recently developed technologies. The first, developed by former BU postdoctoral fellow Alexander Green, co-lead author on the Cell paper and now at Arizona State University, are programmable sensors called “toehold switches” that scientists can design to sense virtually any RNA sequence. The second technology, created by another former BU postdoctoral fellow, Keith Pardee, also co-lead author on the Cell paper and now at the University of Toronto, is a disc of filter paper holding an RNA sensor and the cellular components that make it work. By freeze-drying the sensor-embedded paper, the research team created a paper gene circuit—a sterile, portable diagnostic that can be stored and distributed at room temperature.

The new diagnostic also contains a new molecular tool to differentiate between two Zika strains, using a CRISPR/Cas9-based gene-editing technique that recognizes the American strain of Zika but not the African strain. The American strain, found in Brazil, is of special concern because only it has been connected to higher incidences of fetal microcephaly and Guillain-Barré.

Although a positive Zika test produces a color change that is visible to the naked eye, the team also built a portable handheld “reader” for about $250 to provide faster, more sensitive detection.

The team found that the first-generation technology had a serious limitation: it could detect virus in solution at a concentration of 30 nanoMolar, but Zika appears in much lower concentrations in human blood, saliva, and urine. The highest concentration of Zika has been reported in urine, at 365 femtoMolar, roughly a million times more dilute than the technology could detect.

“Zika is a little unique because it exists in bodily fluids at exceptionally low levels,” says Braff. “To make the technology clinically relevant, we knew we’d need to make it sensitive to much lower concentrations.”

To do this, the team added an existing molecular tool to the device, called NASBA, that amplifies—increases the number of copies of—the DNA or RNA in a given sample. Braff says that the team is now trying to modify the molecular tools in the diagnostic to all run at the same temperature in a “one-pot“ reaction for amplification and detection. They are also building a new reader that can incubate reactions on-chip.

“One of the most exciting things about this platform is that we can take what we’ve done and apply it to any pathogen or virus,” says Braff, who is currently working on a test to determine the susceptibility of different strains of bacteria to particular antibiotics. “Whatever comes up, this will give us the ability to respond rapidly to it.”