With Valentine’s Day approaching, BU Today reached out to some of the many Terrier married couples who met while studying at BU or after they graduated. Some fell in love when one of them was a student and the other was working at the University. According to Development & Alumni Relations, 17,954 alumni have married a fellow Terrier since the 1920s. That’s 8,977 couples. The peak decade was the 1980s, when more than 4,100 walked down the aisle together.

To mark Cupid’s big day, BU photographer Cydney Scott visited some local Terrier couples to find out how they first came together. The stories span some six decades. 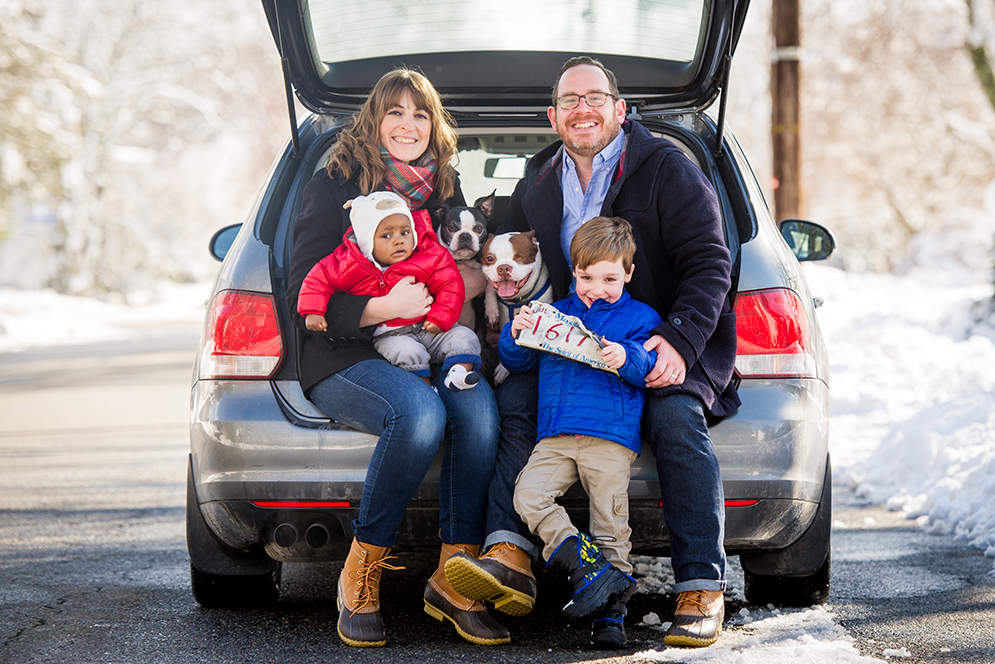 When Jeff Burns (COM’01) survived a nasty car accident on Martin Luther King Day in 2002 because he was wearing a seatbelt, he immediately emailed all of his contacts to stress the importance of buckling up. One of those contacts was Sarah Huber (SED’03,’08), just an acquaintance at the time. They struck up an email conversation and began dating. Four years to the day after the accident, on MLK Day in 2006, Jeff proposed. Now married, Jeff and Sarah have two children, Eli, 5, and Ryan, 8 months, and two dogs, Freddy, a Boston terrier, and Gilroy, a rescued mix, each named for a Terrier hockey great—Freddy Meyer (MET’03) and Matt Gilroy (MET’09). The couple kept the license plate from the car totaled in the accident as a reminder of how their romance began. 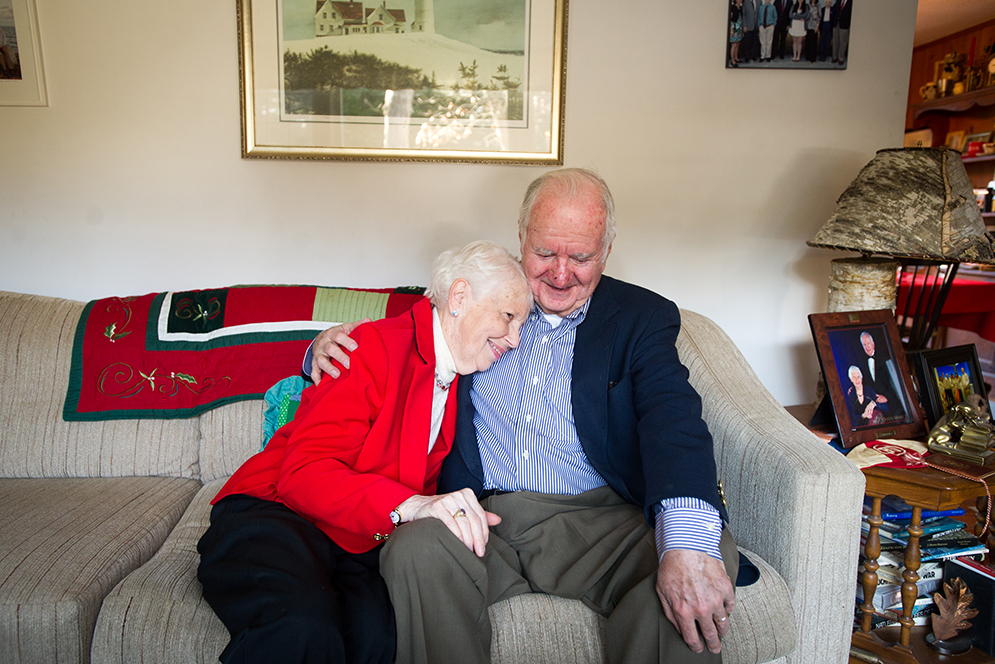 Diana Santoro Geigis (CAS’56) and Ernie Geigis (CAS’55) crossed paths briefly during a meeting of the Student Christian Association more than 60 years ago. Diana was a freshman and Ernie a sophomore. The meeting ended before they had a chance to really talk, so when they ran into each other at CAS several days later, Ernie seized the opportunity and asked Diana if she was planning to attend a square dance that evening at the School of Theology. They arranged to meet there, and “that was the end of meeting other people,” Diana says with a smile. They will celebrate their 60th wedding anniversary in June with their two children and their families. Asked the secret to a happy marriage: “It’s about spending time together,” Diana says. 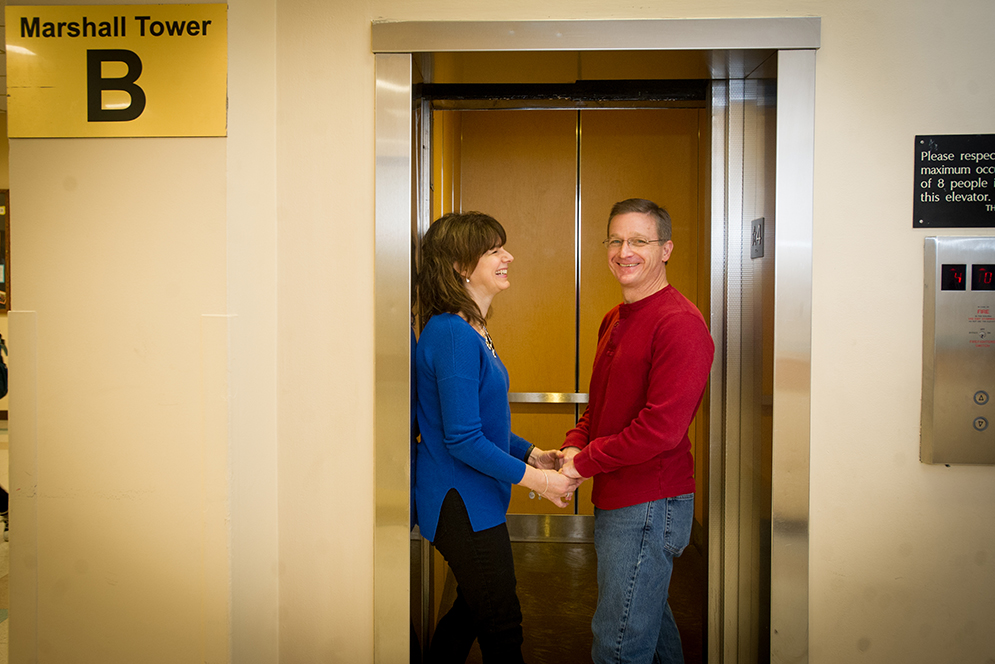 Donna DeRosa Connor (CAS’89) and Brian Connor met during their freshman orientation in July in a Warren Towers elevator. They felt an instant attraction (Donna says she was drawn to Brian’s blue eyes), but both were then dating other people. But when they returned that fall to start freshman year, they looked each other up and started dating. Brian, who had been an ROTC student at ENG, left BU and later graduated from Framingham State College. They married in 1992 and today have four children. The oldest, Megan (SED’18, CAS’18), is a BU sophomore. Donna is an administrative coordinator at the College of General Studies, and Brian is a principal software engineer at AOL. 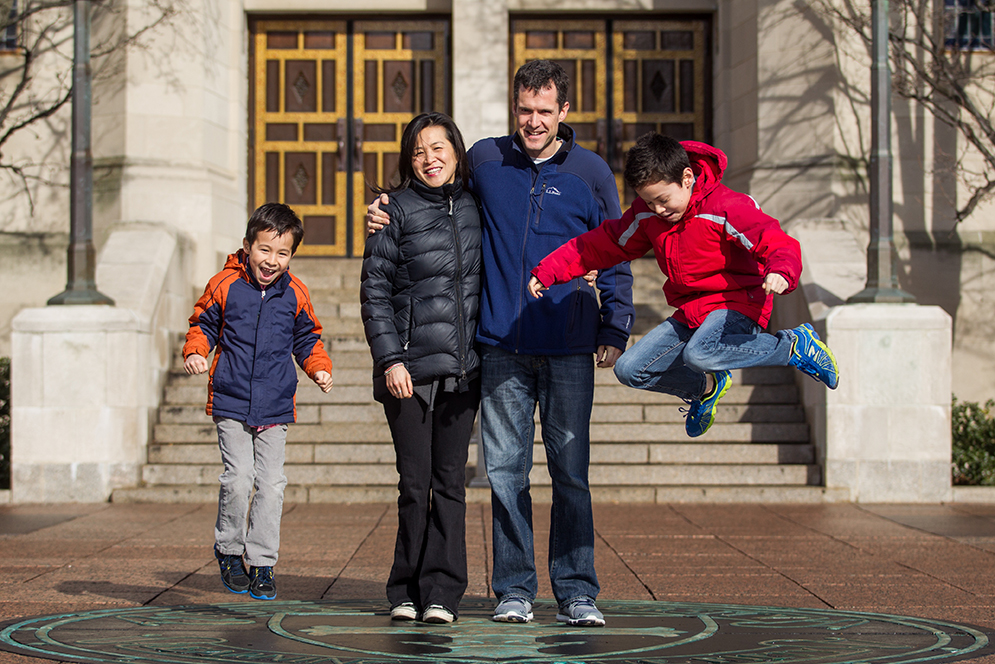 Sharon Chung Sprague (COM’96) and Rob Sprague (SAR’96) met in their freshman English class in 1992. When Sharon needed help navigating her way to her next class, Rob happily obliged. “Our first official date was on Valentine’s Day” that year, Sharon says. The memory of that first date remains vivid for Rob. “We went ice skating at Walter Brown Arena, and then went into the city for dinner and a show.” They are pictured with sons Will, 10 (right), and Bennet, 7, in front of Marsh Chapel, where they were married 13 years ago. 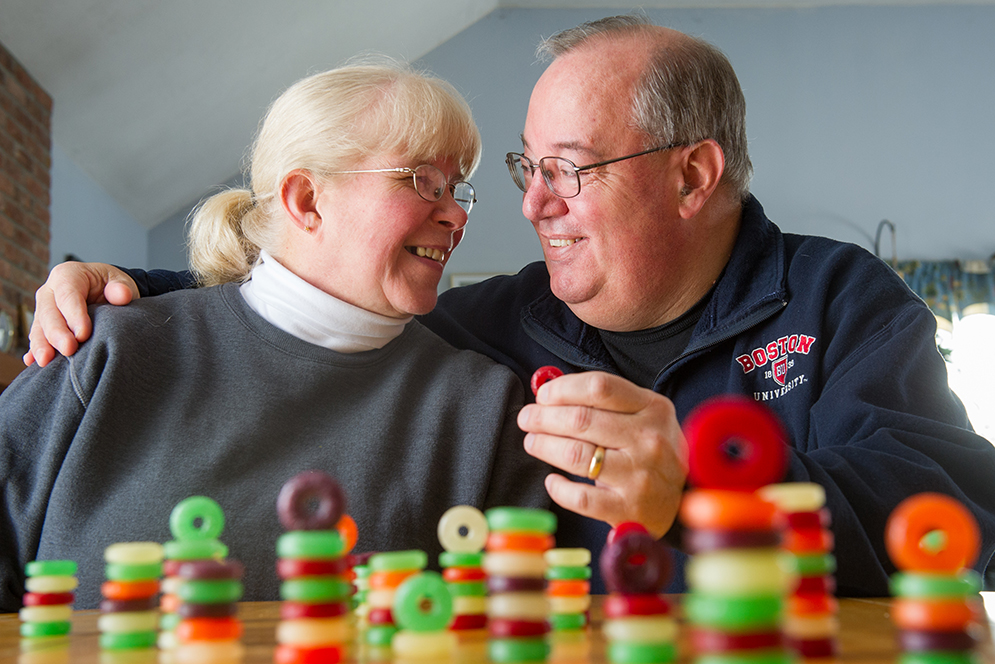 Ed O’Brien (MET’88) met his wife, Trisha Greenwood O’Brien, at a management class they were both taking in 1981. At the time, Trisha was an administrative assistant at the Goldman School of Dental Medicine and the course was for her job. “I shared my Life Savers with her at breaks (not the red ones—I didn’t know her well enough yet to spare a coveted cherry Life Saver),” Ed recalls. “We had our first date that March, with dinner at the old Red Coach Grille on Memorial Drive, across the river from the campus. This was followed by a stop at the lounge on the top floor of the old Howard Johnson’s overlooking Kenmore Square. We married in October 1982, and four kids later, we’re still going strong.” 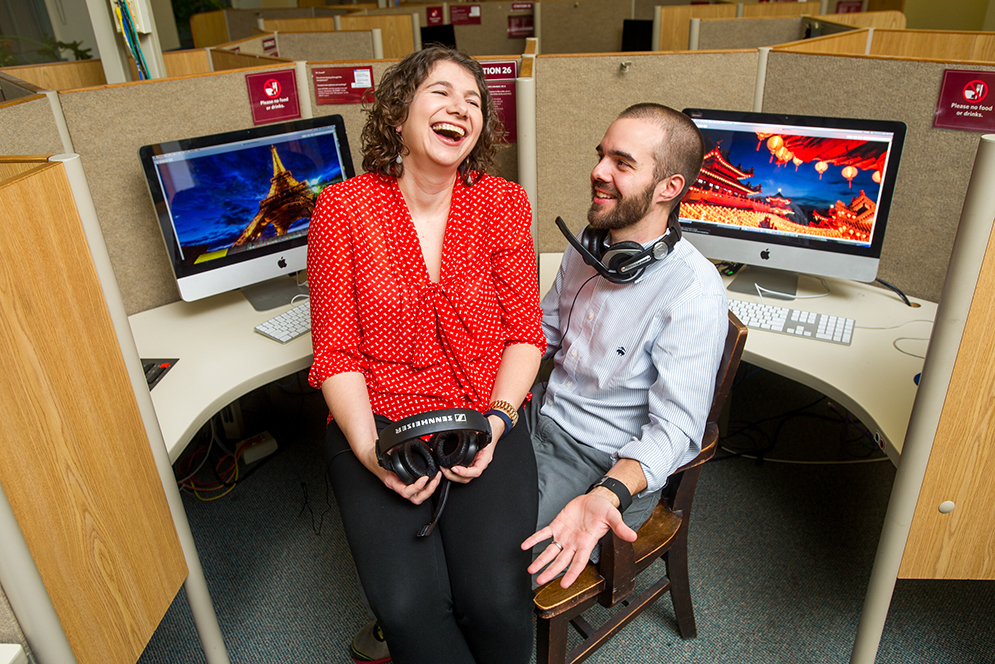 Julie Onufrak Parker (CAS’05) and Scott Parker (CAS’06) met through mutual friends as BU undergrads. “We had classes in the language lab in CAS at around the same time, so we’d both try to get there early (despite the notoriously early classes) so we could chat for a few minutes before heading off to French (me) and Chinese (him),” says Julie. They were married in 2010 and at least 30 Terriers attended. Today, Julie manages communications for a Boston law firm, and Scott is earning a PhD in mechanical engineering at Tufts. Julie says they still see “tons of BU friends regularly,” including many who were at their wedding. 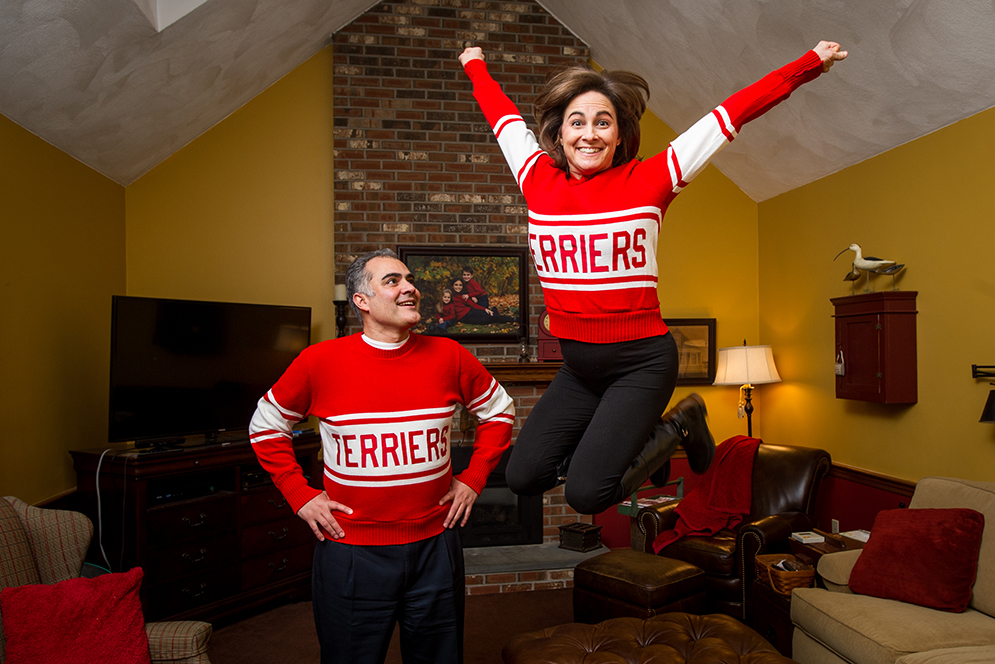 Tony Rivera (ENG’89) and his wife, Pam Galliatt Rivera (CAS’89), met in spring 1987 at cheerleading tryouts and started dating the following fall. At the time, Tony was in ROTC and after graduating became a US Army officer. The two married in October 1991, after Tony returned from Saudi Arabia and Kuwait, where he’d been deployed during Operation Desert Storm. Today, they are the proud parents of three. 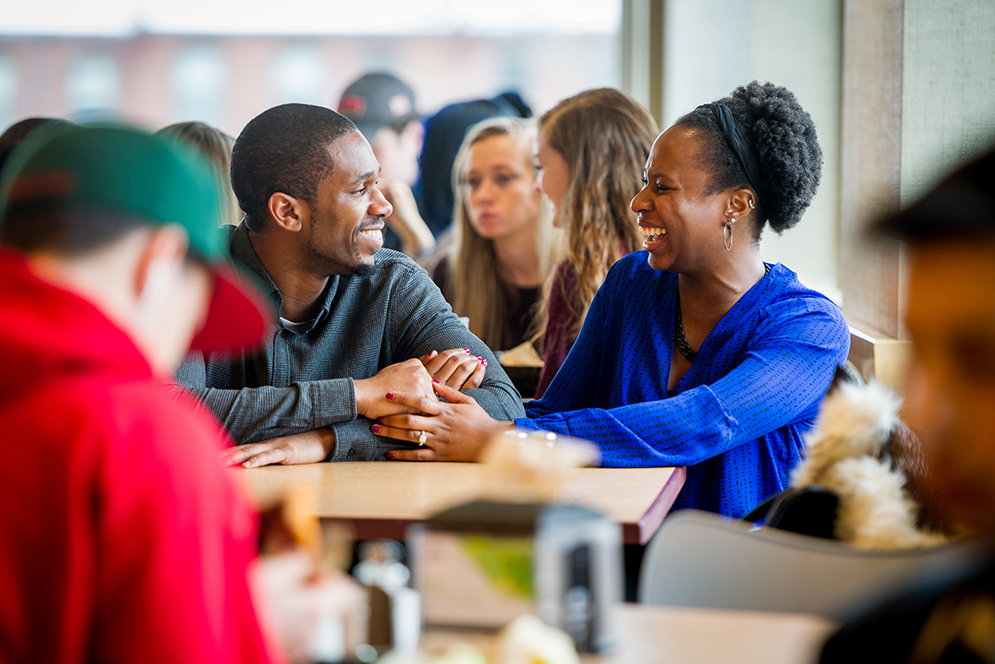 Marc Hurdle (Questrom’12, MET’16) and Tabitha Watson (CAS’12, COM’12, Questrom’19) are engaged and plan to marry next March in Chicago, Watson’s home town. They met the summer before junior year in the Warren Towers dining hall. “I thought Marc was really cute when we first met,” says Watson, now senior assistant director for visitor experience at BU’s Admissions Center. “But I wasn’t planning to give him the time of day. Like at all. He was, thank God, extremely persistent and wouldn’t take no for an answer when he asked me out. He knew this would work, and he was right.”

There are 57 comments on Finding Love on Comm Ave