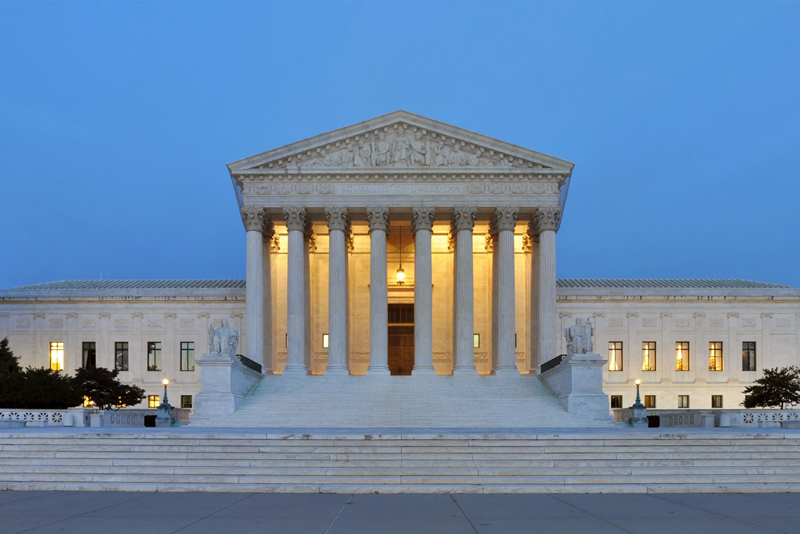 The Supreme Court of the United States. Photo via Wikimedia Commons

Not long ago, I returned to my office from a meeting to find that my Twitter feed was experiencing some higher-than-normal activity. Reading through the list of my new notifications, I learned that down in Washington, DC, at the annual convention of the Federalist Society, Justice Sam Alito had referred to some of my empirical legal scholarship in his opening address. Eulogizing the late Justice Scalia, Alito mentioned that the jovial Scalia always got the most laughs during oral argument. How could he know such a thing? Justice Alito continued: Because there are “some people who have nothing better to do than count Supreme Court laughs.” Aww, Justice Alito, you’re such a sweetheart!

It’s true. Since 2005, I’ve been tallying the number of times each justice gets the Supreme Court gallery to erupt in what the official court reporter records in the oral argument transcript as “[laughter].” The germ of the idea came to me during a class I was teaching on the Superfund hazardous waste cleanup statute. Reading along in the oral argument transcript to the class to explain some subtle point about environmental law, I noticed the [laughter] notation for the first time and had to [laugh] myself. Why in the world would the transcript note such a thing? It doesn’t note other audience reactions, such as [softly weeping] or [trembling with terror at our nation’s future], so why [laughter]?

Thinking about the notation later in my office, I had the insight of my career. Putting the [laughter] notation together with the fact that in the 2004–2005 term, the Court’s transcript was for the first time specifying which justice was speaking rather than simply referring to generic “Justices,” I realized that it had now become possible to figure out how many [laughs] each justice got over the course of the term. I spent the next three hours tallying up the term’s results (Scalia won by a landslide) and writing a short piece called “Laugh Track” which was later published in a great journal called The Green Bag.

And there it would have ended, had not Adam Liptak, the New York Times reporter who covers the Court, enjoyed the piece and written a front-page story about it on the final day of 2005 (it was a light news day). Soon, I was fielding calls from reporters around the country and watching the study’s results scroll across the bottom of national news screens. Good Morning America called me, and although that never worked out, Jake Tapper did interview me in the law school’s faculty lounge for a spot on Nightline. He told me I was kind of funny, but not nearly as funny as the last person he’d interviewed—Sarah Silverman. Fair enough.

The advent of Twitter has kept the project alive. For the past few terms I’ve been keeping score in more-or-less real time, because although the work is extremely demanding and always challenging* (*not really), somebody’s got to do it. The results have been remarkably consistent. Until his death, Justice Scalia always got the most [laughs], while Justice Breyer always came in a distant second. Justices Ginsburg and Thomas inevitably bring up the rear, which, for Justice Thomas at least, is not surprising, since he almost never speaks during oral argument. Now that Scalia is gone, things are opening up a bit. Justice Breyer is the favorite to win his second term in a row, but the Chief Justice always gets his share of [laughs], and Justice Kagan is legitimately funny.

The Twitter feed has also served to keep the [laughter] standings visible among Court watchers and the justices themselves. Justice Alito is, by my count, the sixth justice to publicly refer to the standings. Indeed, his Federalist Society Conference reference reminded me of when Justice Breyer said on the radio show Wait, Wait, Don’t Tell Me in 2007 that I “must not have much to do with [my] time” and made me nostalgic for the time not so long ago when Justice Kagan referred to me in a speech at the University of Arizona Law School as “a law professor who counts.” Justice O’Connor wrote about the standings in a recent book, and Justice Sotomayor mentioned them on The Colbert Report.

But even though I obviously appreciate the references, would it really be so hard for the justices to mention my name once in a while? Even my beloved former boss, Justice Ginsburg, notoriously referred to me merely as “a former law clerk turned law professor.” I mean, gee whiz, I do have some books to sell, and a kid I need to maybe send to college. Throw me a bone here, will you? I’ll be watching and waiting.

After all, I have nothing better to do.

Jay Wexler is a professor law at the Boston University School of Law.

Counting [Laughter] at the Supreme Court